CATS RUN OUT OF LIVES 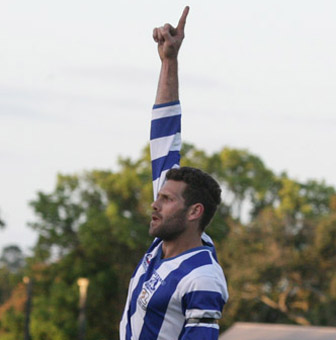 Brave Broadbeach’s finals hopes are over after they were overwhelmed by the fast-finishing Mt Gravatt at Dittmer Park yesterday.

It was built around a vintage display by Darryl White, who was at the top of his game in the forward line.

White has been a different player since returning from his coaching duties with the NT Under 18 side – gone is the tired look to his game, replaced by verve and passion.

“Darryl White played his greatest game for our footy club,” enthused Vultures coach David Lake, back at the helm following his duties with the South Pacific at the nab national under 16 titles in Sydney.

White capped his outstanding game with two goals, while his PNG protégé John James kicked three and thrilled the faithful at Dittmer Park with some of his electric skills.

“He brought his full bag of tricks with him today,” Lake grinned.

Broadbeach hammered the Vultures in their first meeting at Merrimac this season and started as though their season was on the line, edging to a two-point lead at the first break.

With Nathan Quick strong in defence and the Rolfe brothers busy in the midfield, the visitors looked capable of causing the Vultures some grief, particularly as big goalkicker Shane Morrison left the game  10 minutes in with a wrist injury.

However, the Vultures defence tightened with Adam Tarrant restricting Korey Fulton to a handful of kicks and one goal, and big brother Tom controlling the game from half-back.

A 4.5 to 0.2 second term set the game up for the Vultures and they were not going to be beaten from a 36-point advantage at the final break.

“We won ugly,” Lake said. “We find them a most difficult team to play. They’re quick, they run and tackle hard and play with more urgency than anyone.

“At no stage did we really feel in control, it was more like we accumulated our advantage.”

Lake did admit that the win could have been more comfortable had his side made the most of their opportunities.

“We did miss some sitters,” he said.

Reigning Grogan Medallist Nathan Gilliland was a real livewire at half-forward but sprayed 3.7.

Mt Gravatt moved two games clear of Broadbeach and will be eight points in front of Redland as well if the Bombers don’t beat the Brisbane Lion at Victoria Point today.