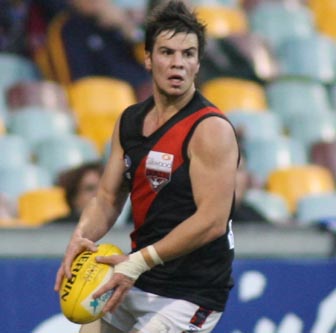 Redland held on for a gripping five-point win in a thriller at Victoria Point today, where Aaron Cornelius booted seven goals for the Lions.

Two seconds and Redland’s season was gone, but the Bombers lived to fight another day after a heartstopping win over the Brisbane Lions at Victoria Point today.

The final siren sounded just after the ball left the boot of young top-up player Bryce Judd, which arrowed onto the chest of Aaron Cornelius. He wheeled around and goalled, but it was all too late.

It should never have got to that stage for the home side, who continued a season-long trend of butchering opportunities in front of goal.

They should have done better than 4.6 in the opening term and sprayed 2.7 in the second, mostly from close range.

The Bombers booted the first goal of the third term to kick 28 points clear, but the Lions began to get some momentum and booted three successive goals until Redland got one on the stroke of three-quarter-time.

Their 16-point lead disappeared quickly in the fourth quarter and the vocal home crowd was on its feet through the see-sawing final 30 minutes.

Cornelius almost won the game for his side, booting four final quarter goals and finishing with 7.4 for the day.

He led hard and marked strongly all day, forming a lethal combination with centre-half-forward Bryce Retzlaff, who worked tirelessly up the ground and finished with close to 20 marks for the day.

The Lions got little out of their midfield in the first half as Redland skipper Phil Carse dominated proceedings, with assistance from Blake Passfield, James Charlesworth and Matt Thomson.

Charlesworth produced two spectacular leaps over opponents in virtually the same spot of the centre square in the second and third terms to vie with other mark of the year contenders.

Adam Mueller started strongly and continued in that vein for the Bombers, while Paul O’Shea was most successful in the ruck.

Canberra recruit Matt Ghirardello has been re-born since a stint in the reserves and kicked the first two goals of the game for the Bombers, with O’Shea adding the next two before quarter-time.

Ghirardello finished with five for the day in his best performance for the Bombers.

Cheynee Stiller was solid across half-back for the Lions and gave them more drive when moved into the ball in the second half.

The Lions showed their intentions to win the game by throwing Broc McCauley into the ruck, with Albert Proud, Xavier Clarke and Ryan Harwood at his feet.

Harwood bulldozed his way around the ground for most of the day and was one of his side’s better contributors, while McCauley took some good marks in the second half.

While the skill level wasn’t high, the intensity was in the last quarter in particular as both sides played as they should have with their seasons hanging by a thread.

Charlesworth had a chance to ice the game at the 30-minute mark but missed, only for the Lions to kick the ball in quickly and get it to Judd before the siren sounded two seconds too soon for them.

While Redland remain in touch with the top five, they still have clashes with the top three to come, starting with Southport at Victoria Point next Sunday week.