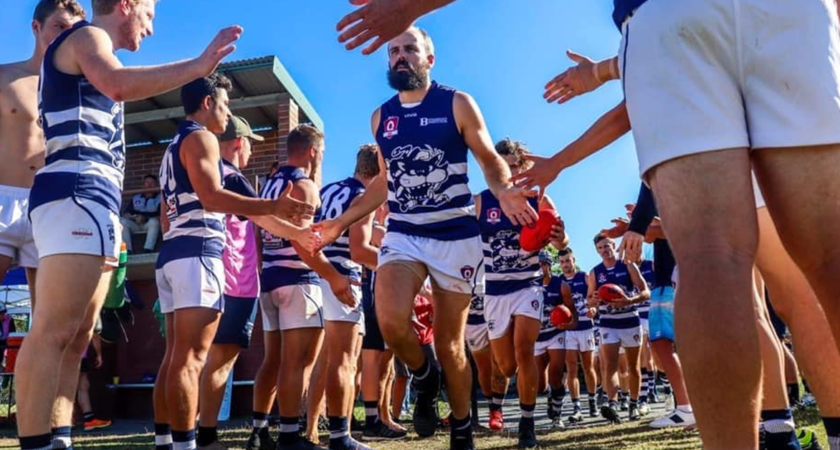 A strong second half carried Palm Beach Currumbin to a convincing win over the Western Magpies at McCarthy Homes Oval on Saturday.

The unbeaten Lions made it 15 wins on the trot after beating the Magpies by 12.14 (86) to 6.5 (41) but were left nursing the QAFL’s leading goalkicker Jack Anthony, who limped off the ground in the first quarter with a hamstring issue.

News from the PBC camp is that Anthony’s injury is not too severe, perhaps a case of tightness, but the spearhead will definitely miss next weekend’s clash against Labrador before having a bye the next round for extra recovery time.

In a game that was torrid throughout, and at times spiteful, the class of the Lions runners came to the fore after half-time.

“The first half was pretty even and I thought we had done well,” said Magpies coach Brydan Morgan.

“But in the second half their midfield got on top of us when they were probably a bit harder and cleaner than us around stoppages.”

The Magpies fired back with two goals, then when they kicked the first major of the second term they led by a point.

However that was to be the only time they held the lead as the Lions cranked up their game and finished with a convincing 28 scoring shots to 11.

With only three wins on the board for 2019, the road ahead for the Magpies to make the finals is a long and steep one although Morgan is far from giving up the chase.

The absence of Ryan Harwood and Gareth Crawford from the engine room robbed the Magpies of firepower around the ball up against a side that boasts by far the most options than any other club in the key area.

Will Fletcher did a good job in keeping in-form Tom Thynne relatively quiet, Riley Green started in defence but was moved forward to try to fire up the forward lines and defender Brenton Saunders was prominent throughout.

Some great news for PBC was the return to action of key defender Dale Neuhaus, a dual premiership player in 2017-18, who was outstanding at the back.

“He was a bit underdone but when we didn’t have Liam McNeven or Jackson Emblem we had to throw him into the side,” said coach Jesse Sinclair.

“He was unbelievable with his ability to read the ball and get into the right spots.”

Wingmen Steve Thynne and Zac Harrison were standouts, so too was half-back flanker Dylan Troutman and the other Harrison brother Jed did well as a back-up ruckman.

Making it a great Saturday for two PBC stars Jason Burge and Glenn Screech were their inductions into the Southport Sharks Hall of Fame that night.

Surfers Paradise came from behind to end their three-match losing streak with victory over Wilston Grange in a wet affair at Hickey Park on Saturday.

Trailing by five points at three-quarter time, the Demons produced their best football of the afternoon and finally found some scoring touch to win by 10.17 (77) to 7.13 (55) in a clash played in constant rain.

It was a sweet victory because the Dees were on skid row coming off three successive losses which had threatened to undermine their place in the top five.

Yet it took a long while before things clicked for the inaccurate Gold Coast side, who had 5.14 on the board at three-quarter time before the message from Moore finally worked.

Asked what his thoughts were at the final break, with his side seemingly in trouble, Moore said it was just a call to stick to the things that had worked well for the early part of the season.

“I told them to trust what we’ve been working on and know what we’re capable of,” said Moore.

“They went out and executed.

“What I was most pleased about was that the boys didn’t panic and trusted what they do well – it was a great last quarter.”

Grange coach Barry O’Brien said when that group lifted, so did the Demons.
It was an oddity that, after 14 behinds up to the final term, the inaccuracy bug shifted from Surfers to the home side who put together only 0.6 in the final stanza.

“Grange missed their opportunities in the last quarter, we missed ours early in the game,” was the Moore summing-up of events.

Moore said Rankin on a wing had his best game in a long time as one of the key factors in the revival.

Thompson Smith was also prominent in his role of back-up ruckman to Harris Newton to be among the best for Surfers.

Grange boss O’Brien conceded that Surfers had the better polish when it mattered most late in the tough game.

“Some of their better players stood up in the last quarter and got them over the line,” he said.

Ruckman Nate Dennis had a huge game for the Gorillas, defender Nick Dickson was strong throughout and a bright note was the debut of Sunshine Coast product  Reed Maskell-Dobbyn.

Maskell-Dobbyn played his first QAFL seniors game as a 15-year-old – he turns 16 on Monday – and slotted into the higher level with apparent ease.

“The kid certainly did not look out of place,” said O’Brien.

Next weekend Surfers have a bye when Wilston Grange host Broadbeach.

Broadbeach proved again that they are genuine QAFL premiership contenders and exposed Labrador as premiership pretenders with a crushing win in the Gold Coast derby on Sunday.

Labrador led narrowly at quarter-time but were completely outplayed thereafter as the Cats crushed them by 14.17 (101) to 4.3 (27) at Subaru Oval.

A minute into the fourth quarter the Tigers finally troubled the scoreboard attendant again with a rushed behind.

That perfectly summed up a bleak afternoon for the Tigers who now face up to rampant, unbeaten premiers Palm Beach Currumbin next weekend when their final-five hopes go on the line.

Labrador were poor on Sunday, the Cats were superb on a ground that featured a mud heap in the cricket centre wicket area – but the bog did not hinder the home side at all.

The Cats had 10 individual goal kickers and surged home on the back of what coach Beau Zorko rated as the best all-round defensive effort of the season as his new-look side continues to adapt to his new game plan.

“It has been a work in progress so it’s nice to see things coming together,” said Zorko.

“I thought defensively we were very good, it was probably our best defensive effort of the season across the ground.”

Certainly the Cats made the Tigers look pedestrian despite their cross-town rivals being boosted by the returns of five key players.

The Tigers may now need a rethink of some of their supposed better players because they definitely seemed to be lacking some youthful legs and exuberance.

Coach Liam Burke recognised as much and had nothing but praise for the way the Cats dismantled his side.

“They’re a slick outfit, they have good ball users and they just cut us up,” he said.

“Their effort and intensity around the ball and their spread and work rate was too good.
“We’re at a stage where we need 22 contributors and if there are lapses we unfortunately get found out a bit.”

Take away 19-year-old Josh Deacon and there was little for the Tigers to take away from the lesson.

“We were rapt with Josh on Jason Cloke, we thought he did well on him,” said Burke.

“Now we have to lick our wounds and gear up for an effort next weekend.”
In the Broadbeach camp it was all smiles.

Ben Hancock was great on Tiger big man and skipper Bryce Retzlaff, Ballarat recruit Jackson Fisher was outstanding around the ground in conditions that he was used to, and reigning Grogan Medallist Blake Erickson continued his return to his very best.

But a standout was Southport-listed Kwaby Boakye, an electric performer when he hits his straps.

“The basics of his game when he’s on song in terms of his contest work and spoiling is when you see the best of Kwabe.

“When he’s running and taking the game on it lights up the crowd.”

Boayke did just that and, given Southport lost their NEAFL match to Aspley  on Saturday,  a recall to the Sharks ranks seems inevitable.