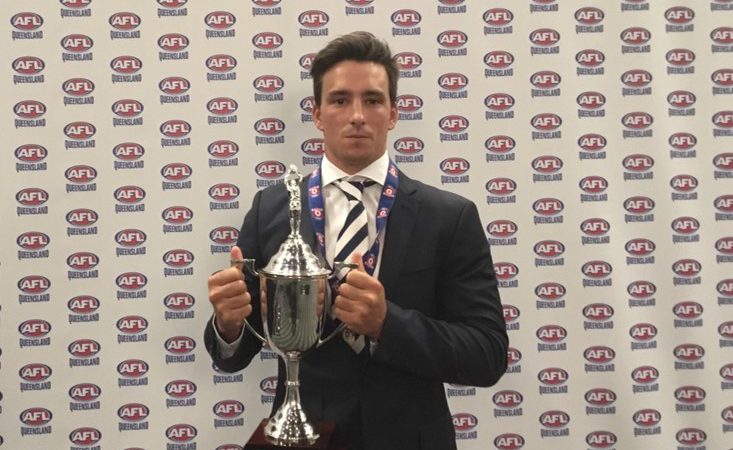 Broadbeach’s community vibe was the main driving factor in Blake Erickson’s move to the Cats ahead of the 2018 season – a decision which has already reaped plenty of rewards for both club and player this season.

Erickson topped his QAFL contemporaries at the 73rd annual J.A Grogan Medal on Sunday night, joining an illustrious fraternity of previous winners in just his first full season with the Cats.

He polled 20 votes to sit outright atop the competition leaderboard ahead of Palm Beach Currumbin’s Jason Burge on 18 votes (ineligible) and Surfers Paradise’s Brody Haberfield (14) in third.

His stellar debut season in the blue and white came as a result of his genuine football talent and a strong work ethic and dedication to rehab that truly set him apart from his peers.

But his decision to move to Subaru Oval in the offseason allowed the midfielder to return to a club reminiscent of his former days as a junior in the sourthern states.

Having grown up in northern Victoria and on the northern New South Wales Coast where he played for Corowa-Rutherglen and Nelson Bay respectively, local community footy was all Erickson knew growing up and played a significant role in determining his new club this past summer.

“I really wanted to focus a little bit more on my career this year. I was happy to come to Broadbeach, Erickson told aflq.com.au.

“That local football club vibe was what I was brought up with in New South Wales and that’s what I really love about the club.”

“There’s a great feeling around the club all the time. You’re happy to come to training because you’re winning, and I want to be around the boys as much as I can.”

Erickson had spent the last four years of his career with NEAFL outfit Southport, but the added requirements of the four-state and territory competition soon became too much for the 25-year-old.

In his final season with the Sharks, the club slumped to their worst ever finish to the season; producing a mere four wins which placed them well outside of the finals bracket.

“Obviously last year at the Sharks, we weren’t very successful, and I really got over the travel and that sort of stuff,” Erickson told aflq.com.au following his Grogan Medal triumph.

“I was spending a lot of time away from home and it started to become a bit of a drag with work.”

Erickson emerged as the most probable inductee into the Grogan fraternity as early as Round 13 given Palm Beach Currumbin midfielder Jason Burge was ineligible after a suspension in the opening round of the season.

The pair went toe-to-toe across the second half of the season but two votes in the Cats’ Round 19 win over Labrador lifted Erickson two votes clear and into first place.

Speaking shortly after being crowned the QAFL’s best and fairest player, Erickson was proud to now be among the competition’s best footballers.

“I’m pretty surprised. I was happy to get the votes in the last round to take the win off Burgey [Jason Burge], who was obviously ineligible,” he said.

“To be held in the same stead as them is a pretty good feeling.”

Erickson’s Cats will play in the QAFL Grand Final this weekend, September 22 against Palm Beach Currumbin at Leyshon Park Yeronga.

To find out more about the Grand Final, check out the Facebook event here.