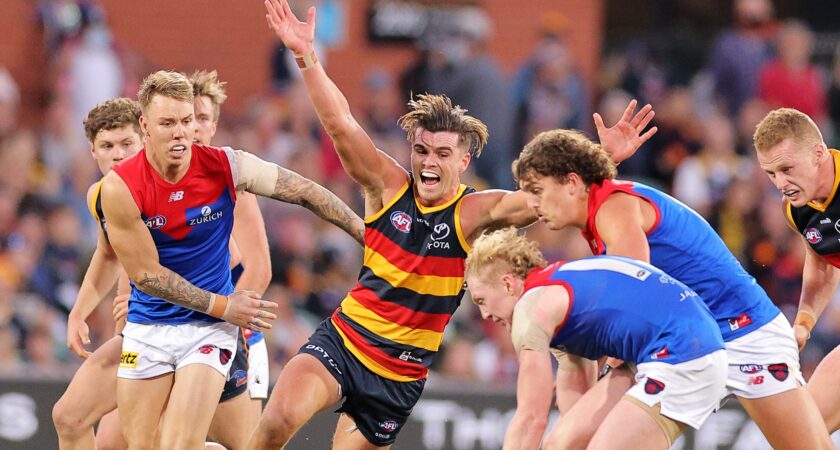 There’s a player wearing the #2 jumper for the Adelaide Crows this year who looks a lot like Ben Keays, who was #1 with the Brisbane Lions for four years from 2016. But it can’t be him, can it?

Indeed it can. And it is. But in name only. The hard-at-it 24-year-old Crows inside midfielder is an entirely different player to the 22-year-old Academy graduate delisted by the Lions in 2019.

Relishing the chance to play in the role to which he is best suited, he is confident and more productive. He is improving in decision-making and ball-use by the week and is all about ‘team’.

So much so that there is an argument to say Keays is the most improved player in the competition in the past 24 months after being thrown a career lifeline by Adelaide in the 2020 rookie draft.

Members of the Keays Fan Club certainly have reason to mount such a claim after his pivotal role in the Crows’ heart-stopping one-point win at Adelaide Oval last Saturday to burst the unbeaten bubble of ladder leaders Melbourne.

He had a career-best 34 possessions, kicked an equal career-best two goals and had a team-high seven tackles to rank equal second best with the coaches behind Melbourne ball magnet Clayton Oliver (38 possessions, 27 contested possessions, three goals, nine tackles and 13 clearances).

Keays and teammate Paul Seedsman earned seven votes in the coaches association player of the year award behind Oliver’s 10 votes in an unforgettable Adelaide win.

Saturday was the fourth 30-possession game of Keays’ career – and his fourth in six weeks.

Now with 277 possessions (112 contested possessions), five goals, 56 tackles and 53 clearances in 10 games this season he has established himself as a legitimate weapon for the rebuilding Crows.

After playing 30 games in four years in Brisbane, he has now played 26 games in a row for the Crows after missing selection in Round 1 last year.

His first game in red, blue and yellow could hardly have been a bigger affair. It was Round 2 – the resumption of the competition after the Covid lockdown and the Adelaide showdown against Port Adelaide.

Similarly, his clearance numbers have gone from 1.17 to 3.85 and 5.3. And despite playing in the midfield with the Crows rather than his predominantly forward role with the Lions, his average goal count across both clubs is similar overall but up 50% this year.

“We liked him in his draft year – we always knew he had strong running ability,” Reid said. “And we we knew the depth of the Brisbane list (from which he was cut).

“We wanted a player who could player inside or outside, and potentially even tag. We knew his versatility and we remembered vividly the 2017 NEAFL grand final when he had 30-odd and kicked a couple of goals to win the (best afield) medal.

“We had a lot of young players but were lacking in that second level. Basically, he was too good for that level, and he wasn’t good enough the way he was going to play regularly at AFL level.”

After his release by Brisbane Keays had decided to play with Box Hill in the VFL in 2020, but a conversation from the Crows shortly before the draft changed all that. For Keays and Collingwood cast-off Ben Crocker.

“We wanted some help for our first and second-year players … players who had been in the system, were in the right age bracket and could pass on what they’d learned if we gave them a chance.

“Ben had basically been through (at Brisbane) what we were just going into (at Adelaide). It was a good fit. We didn’t give him any guarantees … we just gave him opportunity. He’s earned the rest.

“He’s shown a sense of maturity. Getting out of his comfort zone, moving away from home and understanding the work that is required to get to the level … it’s all been part of it. And I think he’s shown some good leadership too,” Reid said.

“If you asked him he’d probably says he’s out-performed his own his expectations but he’s got his just desserts.

“That’s not to say he hasn’t had his moments when we’ve had to say ‘hey …..” but he’s been terrific overall and he can build on this now and finish up with a nice career.”

Crocker, who had played 26 games at Collingwood, had a similar story but did not make the most of his second chance. He played seven games with the Crows in 2020 only to be delisted again in October.

Keays finished fifth in the Crows best & fairest despite being overlooked at selection in Round 1 and won the ‘Players Trademark’ award – recognition from the playing group that is valued enormously at that level.

So not only did he get a new contract but was also offered the chance to go from the #28 jumper he wore in 2020 to the #2 jumper that became available when Brad Crouch quit the club to go to StKilda.

Adelaide football legend Malcolm Blight, commentating on the Crows game on Saturday, admitted he had always questioned Keays’ decision-making ability and ball use.

“But I’ve got to say I’m coming around. He’s not there yet but he’s coming along nicely. Full credit to him,” Blight said.

Keays, born in Melbourne, moved to Brisbane with his family aged five. He played junior football at Morningside, joined the Lions Academy at 14 and did his secondary schooling at Gregory Terrace, a rugby stronghold that also sent Connor Ballenden to the Lions.

With a strong family history in football at the highest level, he was always going to play in the AFL. Or at least that’s what anyone close to him would say.

And it looked like they were right when he won All-Australian Under 18 selection in 2014-15 and captained Queensland to the 2015 division two title at the Under 18 championships, winning the Hunter Harrison Medal for the carnival’s best player in division two.

He played regularly in his first two seasons with the Lions, initially under Justin Leppitsch and then Chris Fagan, before things went astray and he played only two games each in 2018 and 2019.

Now, at 24, he’s about where most expected him to be. It’s just taken a little longer.

The now 56-gamer, originally taken by the Lions at #24 in the 2015 National Draft, is 60 games behind the ‘dux’ of his draft year – Essendon’s Anthony McDonald-Tipungwuti. A late rookie pick, ‘Tippa’ has played 116 games.

It was one of those sliding doors moments that football is famous for.

Keays only went to Brisbane in the first place after the club, having already snared fellow Academy player Eric Hipwood, matched a bid from the Western Bulldogs.

Instead the Dogs took Josh Dunkley, who in his first season was a member of the club’s first premiership side since 1954.

If the Lions hadn’t chose to match the bid? It’s good fodder for the really hard-nosed fans.

In 2019 Keays saw 65 players taken ahead of him in the National Draft and two more in the Pre-Season Draft before he was the sixth player chosen in the Rookie Draft.

It’s the classic second chance story. Keays has reignited the flame on the football dream that was temporarily snuffed out by the Lions in what looks like turning out to be the best thing the club could have done for him.

In other Queensland AFL news this week:-

Brayden Preuss suffered a shattering blow on Tuesday that has ended his first season with the GWS without playing a game. Set to return from a right shoulder reconstruction, Preuss was lifting weights in the gym where he tore the pectoral muscle in his left shoulder. The ex-Gold Coast Suns Academy ruckman from Townsville has had a horrid run. He debuted with North Melbourne in 2017 but after eight games at North that year and 10 games at Melbourne in 2019-20 he will turn 26 next month stranded on 18 career games.

Zac Smith’s first game in 21 months for the Gold Coast against Geelong in Geelong produced a solid individual performance in an improved team showing highlighted by the 52nd and best goal of his career – a miraculous right-foot snap under heavy pressure in the pocket.

Dayne Zorko continued his blistering form with 28 possessions, a goal and six clearances to lead a strong Queensland contingent in the Brisbane Lions’ sixth consecutive win at the Gabba against Richmond. Eric Hipwood was another standout with four goals  likewise, while Keidean Coleman posted a career-best 16 possessions to go with a goal in possibly his best performance.

Will Martyn was set for a dream homecoming when he was named as the medical substitute for Richmond at the Gabba. It was his second AFL game and the first in front of his former ‘home’ fans for the ex-Lions Academy captain. Sadly, he did not get on the ground.

Charlie Dixon played a critical second half role to help get Port Adelaide over the line in a slog against Collingwood. With his side 15 points down at the last change, he kicked one goal himself and dished off two others, including what turned out to be the winner to Ollie Wines after he took the ball out of a short boundary throw-in.