Cam Rayner writes for aflplayers.com.au on his new experience from the other side of the whistle.

As challenging as waking up early the morning after a game can be, it was well worth the early rise to umpire local footy games across the Brisbane community as part of Community Round with AFL Queensland.

The discussions started between Brisbane and AFLQ as a way for us to give back to grassroots football and support future generations of AFL and AFLW players.

It also presented a great opportunity for us as players to understand the challenges umpires face when adjudicating games.

As much as the early wake up wasn’t ideal and you’re a bit rusty from a physical game the night before, arriving to the five communities around Brisbane –  Morningside AFC, Sandgate AFC, Mt Gravatt AFC, Wests Juniors AFC and Victoria Point AFC – and seeing the joy on the young kids faces makes it all worth it.

If I think back to when I was a young kid playing junior footy, I would’ve been starstruck if my team was given the opportunity to have someone I looked up to umpire our game.

For me, as a 19-year-old, to be able to have that influence on young children was really eye-opening. It’s often something I can forget or take for granted but it also made the experience so much more enjoyable. 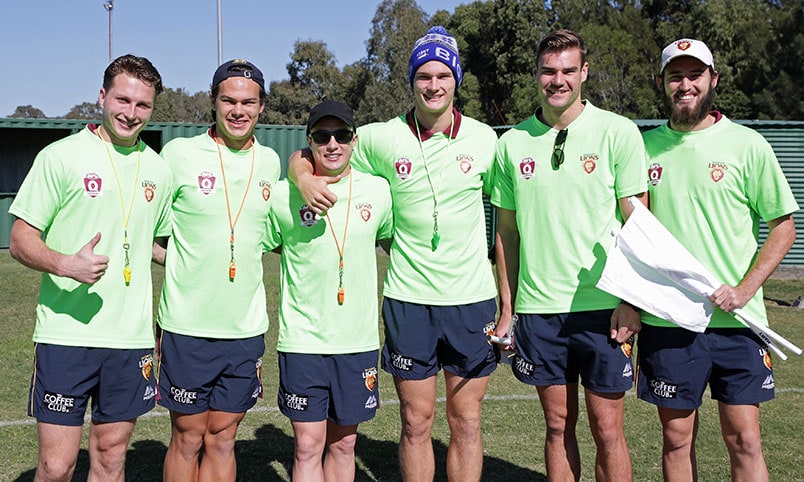 You can only imagine how entertaining it was watching the big guys run along the boundary with a smaller player in Lewy!

Umpiring with ‘Witho’ was also an experience!

Being out there as housemates made it more entertaining, but I was also feeling the pressure.

It was interesting to see how challenging it is to umpire a game and have to make tough calls in the moment despite the fact it was only an under-12s side!

I can’t imagine how some AFL umpires cope when they’ve got the pressure of fully grown men running around, the pace of the game and fans eagerly watching.

Before the bounce we were told to let the game flow a bit, but both Witho and I were caught out for a few questionable decisions.

I called ‘holding the ball’ too early and the young kid let me know about it.

The other was when Witho paid a mark despite the ball being touched off the boot – the crowd let him know they were disappointed straight away.

As a junior, I had a little bit of experience with boundary umpiring but it’s never the same as when you’re in control of the game.

Sharing an experience like this with my teammates gave us an insight into the challenges associated with being an umpire and also changed our perceptions.

When there are stages of the game where the pressure is on, as a player you might say things in the heat of the moment, but now being on the other side you understand the pressure that umpires face too. 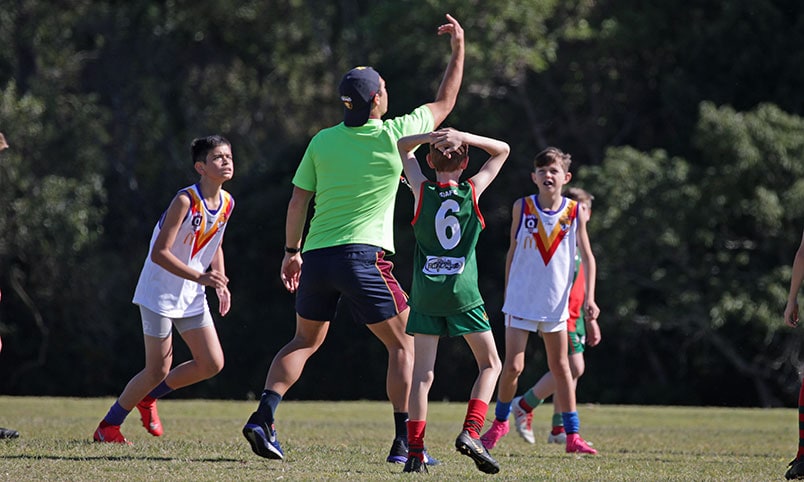 Even though it was only under-12s, you still understand the impact that you can have with every decision you make having the ability to change the course of the game.

Before the match started, I was fortunate enough to have a chat with AFL umpire Matt Stevic.

He’d stayed around after our game the night before and it was a great chance to chat with him about his life away from football.

Too often we are so focused on the game that we don’t get the opportunity to engage. Having those conversations really helps us understand that they’re just normal people like us.

Going forward, having had this experience, I think it will help my teammates and I to better understand the work umpires do.

It’s incredibly important to respect their decisions and they deserve to be valued for the work they do in our game – without them, we wouldn’t be able to play.