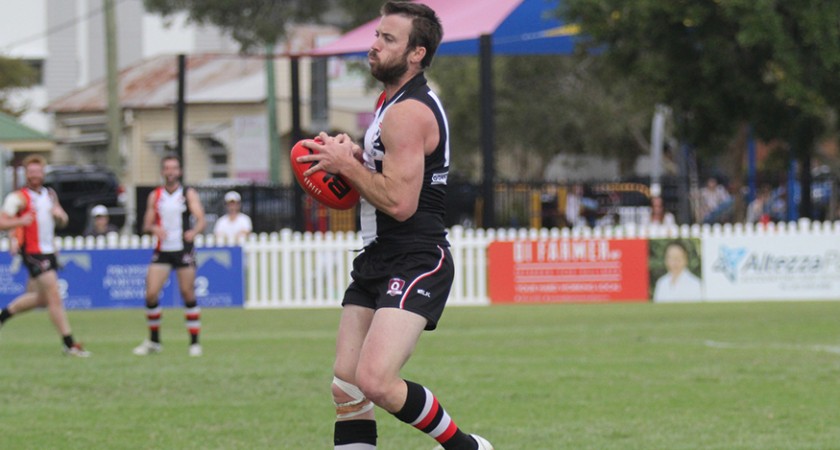 2016 Morningside co-captain Sam Brown has called time on his playing career, embarking on a coaching journey with the Panthers.

Following a few personal doubts surrounding his body and the rigors of another season, Brown decided to hang up the boots and pick up a coaching board.

“I had a meeting with Steve (Wildschut) after he got appointed as coach and discussed with him the fact that I wasn’t confident my body was going to take me through a full season,” Brown said.

“He said to take some time to think about it and have a look at your body in terms of rehabilitation and the like. I did a bit of running, exercise and things like that but the body was shot. Early December I decided to call it, let him know immediately, and then went through the interview process to be an assistant.”

After over 150 games, two premierships and five grand finals with the Panthers, walking away as a player was not a decision he took lightly, but was one that sits comfortably.

“I’ve had a fantastic career. If someone had offered me what I have achieved at Morningside at the start of my career I would have said yes every day of the week.

While the decision isn’t too far in the rear vision mirror, Brown has had time to sit back quietly and reflect on the ride.

“The Morningside past players often catch up, and when that happens you go through a reminiscing session. I had the opportunity late last year to sit back and think about what I’ve been able to achieve and how much I’ve enjoyed it,” he said.

“I would probably say I’m blessed. I don’t think I would have had as good of a career anywhere else. The environment Morningside put you in make you a better person and a better footballer, so I feel more blessed than proud.”

Now it’s time for the next chapter at Jack Esplen Oval, and it’s an area Brown has had his eyes on for a while.

“I’ve always felt like I form really good relationships with people, so coaching was always on the agenda. Whether I wanted to go straight into it was a different question, but I always felt like there was going to be more football after playing. I’m really looking forward to the challenges this holds,” he said.
Brown, a stalwart of the Panthers’ back six in recent times, will (no surprise) be in charge of the backline group this year.

So what does a player so familiar with the four walls of Morningside, just out of the system bring?

“I have the ability to look back pretty recently on what it was like to be a player in certain situations and being able to relate to the players from a coaching point of view. I feel like I will be very relatable to these players,” Brown said.

Now that 2017 is in full swing, Brown said there is a real buzz around the place.

“It’s a pretty good feeling at the moment. For a proud club like Morningside, not making the finals is a pretty hard thing to swallow. Steve has brought in a breath of fresh air and the enthusiasm the playing group really needed, and are flourishing in,” he said.

“It’s a really good feel around the place at the moment.”

Morningside kicks of its 2017 campaign against Palm Beach Currumbin at home on April 22.