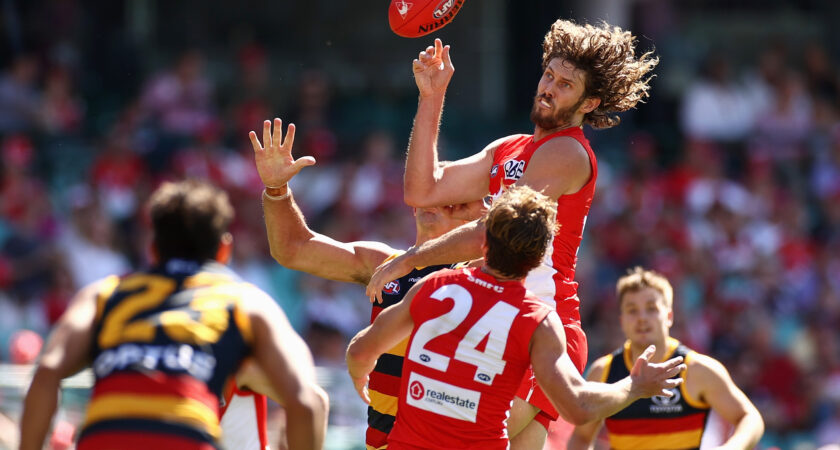 If you’d been asked pre-season to forecast the standout Queensland player in the 2021 AFL season who would you have tipped?

Reasonable thoughts all of them. But if the first four rounds of the AFL season are any sort of guide you’d be wrong.

The early standout and a contender for the AFL’s Recruit of the Year title is the man who already has made AFL history this season as the first person to play with four clubs in four different states – new Sydney Swans ruckman Tom Hickey.

The now 30-year-old product of Alexandra Hills via Iona College and QAFL club Morningside has been a key addition to a Swans side that has stunned the competition with a 4-0 start.

And while the unassuming and ever-humble journeyman won’t be booking a fitting for an All-Australian blazer just yet he has been a much more important signing than the limited news splash of his switch from West Coast to Sydney suggested.

Hickey has certainly filled what has been a recurring gap in the Swans armoury since Sam Naismith, who played in the 2014 grand final in his 13th game at 24 and was being groomed as the No.1 ruckman.

He has taken a firm early grip on the No.1 ruck job and sent a strong message to the rehabilitating Naismith, who is soon to return after an ongoing injury nightmare in which, after 15 games in 2017 Naismith, he missed 2018-19 altogether and played only Round 1 and Round 4  last year.

But in context the Hickey numbers are more compelling.

He is equal 15th in the League in clearances, with Naitanui (28) the only ruckman ahead of him.

He is equal 14th in the League for one-percenters (tackles, smothers, shepherds etc) and best among the ruckman, ahead of Pittonet (19), Goldstein (17) and Gawn (16).

And he shares top spot on the goals list for ruckmen with Goldstein and Fremantle’s Sean Darcy.

It’s not just the statistics that endorse Hickey’s strong start to the season. The loping left-footer also polled prominently in the AFL Coach’s Association player of the year award in which each coach allocates votes on a 5-4-3-2-1 basis for each of his team’s match each week.

He has polled in three of the Swans’ four games against Brisbane, Adelaide, Richmond and Essendon for a total of 14 votes to rank 14th overall, level with Naitanui and behind only Gawn (22) of the ruckmen.

Among the Queenslanders Hickey has polled most votes from Hipwood (11), Adelaide’s Ben Keays (8), Andrews (7), Bowes (5), GWS’ Lachie Keeffe (3) and Zorko (2). Keays, like Hickey, has polled three times, Hipwood and Bowes twice and Andrews, Zorko and Keeffe once.

As much as Hickey’s excellent form since he emerged from Naitanui’s shadow at West Coast might have surprised a lot of AFL fans it’s nothing knew to recruiters with a good memory.

After sharing in Morningside’s 2010 QAFL premiership in just his second season of football the one-time State volleyball representative was an athletic standout at the 2010 AFL National Draft Combine in Canberra.

The 201cm Queensland Under 18 representative was the best performed ruckman in the agility test, equal second best among ruckmen in the endurance beep test and second outright in the “clean hands” test.

Although most recruiters had barely heard of him 12 months earlier once his athletic capabilities were identified they were circling in numbers ahead of a draft from produced only one top-line right – Lycett was taken by West Coast at #29.

But more than 10 years on the question remains … where might Hickey have fallen had the Gold Coast Suns not jumped to claim him prior to the draft on a zone concession?

It was a question that took on greater relevance 18 months later in Round 10 2012 when Hickey, in just his fifth AFL game for the Suns against Collingwood at the MCG, underlined his potential with an enormous solo performance.

In a 97-point loss in which Gary Ablett had a career-best 53 possessions for the Suns Hickey had 19 possessions (14 contested), 24 hit-outs, four tackles and seven contested marks.

Yes, seven contested marks! It is an equal record by a Queenslander in the AFL, which he shares with Nick Riewoldt and Kurt Tippett, a Suns record he still holds outright, and equal to the Brisbane Lions best held by Jonathan Brown.

Only 21 players in League history have bettered it since contested mark statistics were first kept in 1999, and only four players since Hickey’s breakout rookie performance on a Sunday afternoon at the ‘G’.

Wayne Carey holds the AFL record for most contested marks in a game at 10.

Hickey’s off-season move to Sydney has seen him join Franklin (34), Josh Kennedy (32) and Dane Rampe (30) as the only players aged 30-plus in a young Swans side and has won lavish praise from coach John Longmire.

“He’s been terrific for us. He competes hard, understands his role in the team and plays to it. And he’s fitted in really well among the playing group,” Longmire said recently.

Hickey’s 14 possessions (12 contested), 27 hit-outs, game-high eight clearances and a personal-best 10 one-percenters saw him ranked the fourth-best player by Longmire and rival coach Ben Rutten in the Round 4 win over Essendon.

Other standout Queenslanders in Round 4 last weekend were:-

Eric Hipwood was rated the Lions’ best in their Ballarat loss to the Western Bulldogs. He had 14 possessions, 11 marks (an equal career-best four contested marks) and two goals.