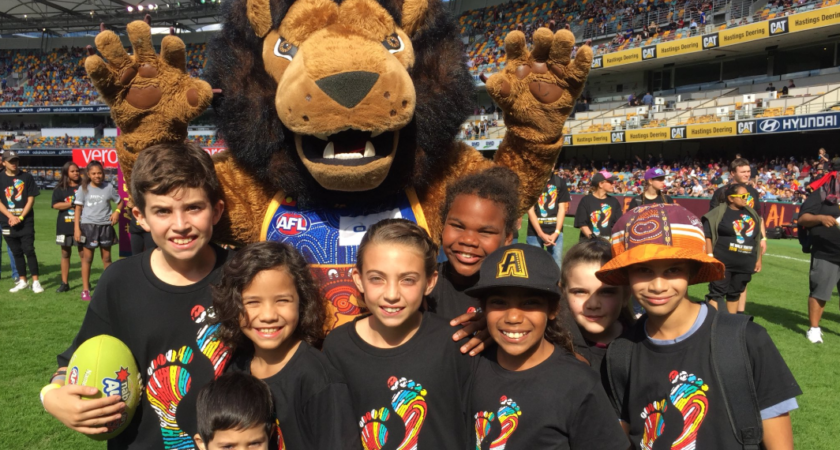 On Sunday, June 10, AFL Queensland partnered with The Long Walk, the Brisbane Lions and Deadly Choices for the 2018 Brisbane Long Walk to commemorate the Sir Douglas Nicholls Indigenous Round.

Over 570 members of the public registered for the weekend’s walk, which commenced at Kurilpa Park, South Bank, prior to the Brisbane Lions’ showdown with Essendon at the Gabba.

“It was a fantastic sight to see people of all cultures in their Long Walk shirts walking along the river in a sign of unity,” Allie told aflq.com.au.

“The partnership with the Lions, Deadly Choices and AFLQ helps to drive greater health outcomes for Aboriginal and Torres Strait Islander people.”

In addition to the Long Walk, Brisbane Lions players wore their Indigenous Guernseys in the match against the Bombers and the Yerongpan Aboriginal Dancers performed a Welcome to Country.

Prior to the game too, over 200 walkers also lined the sides of the Lions’ pre-match banner in a guard of honour for the players.

At half time, 50 young Indigenous kids who participated in the Deadly Choices School Program, played in the NAB AFL Auskick games at half-time.

On November 21 2004, Long walked from his home town in the suburbs of Melbourne all the way to Parliament House in Canberra – a journey spanning in excess of 65 kilometres, in an effort to put the national spotlight back on Aboriginal and Torres Strait Islanders.

The Long Walk Brisbane is the only ‘Long Walk’ in the country outside of the traditional Long Walk prior to the Essendon v Richmond Dreamtime at the ‘G blockbuster.