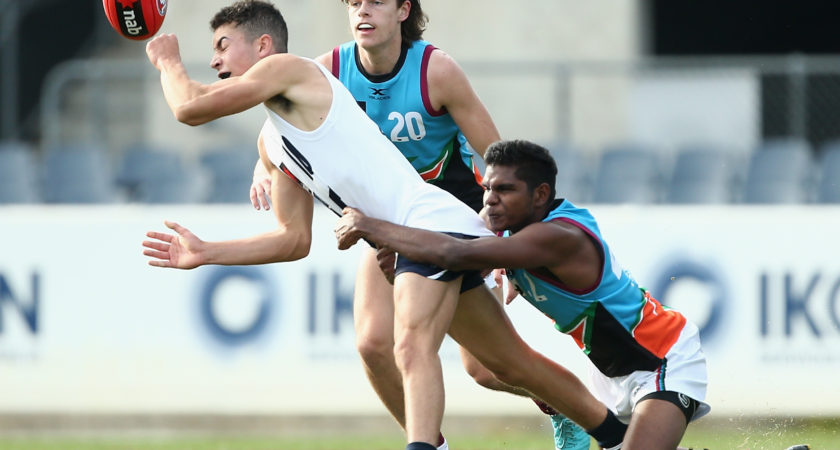 The Allies will be looking to continue their winning start to the NAB AFL Under-18 National Championships this Saturday as the combined squad face their most difficult challenge yet.

The side – a combination of players from Queensland. New South Wales, the ACT, Tasmania and Northern Territory, claimed victory against a strong Victoria Country outfit last week, but face the daunting prospect of Victoria Metro this time around.

After a slow start to the game, the Allies willed themselves ahead in the contest with Country, and through three clutch goals from GWS GIANTS Academy ruckman, Kieren Briggs, emerged 23-point winners.

The away side led by Briggs, booted 4.6 in a final barnstorming stanza, while also keeping their opponents goalless.

An opening round win opens the door for history to be made if the Allies can do it again against Metro at Fankhauser Reserve, Southport.

The side have never started a NAB AFL Under-18 National Championships with two wins in their opening two games.

Saturday’s game will also be the first time the Allies side have ever faced Metro in Queensland.

AFL Manager Talent & Academies NSW/QLD, Mark Browning, suggests this year could be the year the Allies squad announce themselves to the other competing states.

“This could be the best level of Under-18 game you’ll see all year in Queensland,” Browning told aflq.com.au.

“The squad this year is a very talented bunch and we hope they can upset Metro this weekend just like they did in 2017.”

The Allies have made three changes to their side from last week’s opening round victory.

The Queensland contingent in the side performed reasonably well against Country, with Sunshine Coast product Jack Tomkinson among those in peak form,

The 200cm big man compiled 32 hit outs in the game and was duly named in the Allies’ bests for his efforts.

“They all had good level games against Country so now it will be interesting if they can take another step and consistently produce quality games after last week,” Browning said.

The Allies host Victoria Metro at Fankhauser Reserve on Saturday, June 9, at 10:00am.