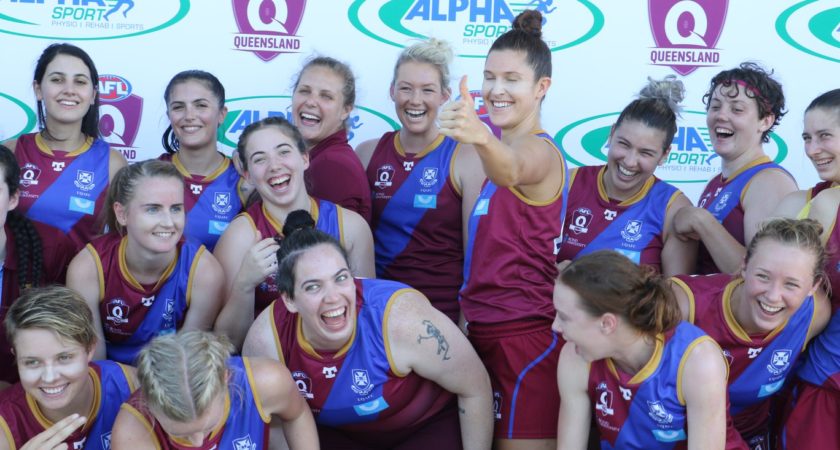 A five-goal premiership quarter by the Kings became the catalyst for Coorparoo’s commanding 28-point win over archrivals Yeronga South Brisbane on Friday night.

After an inaccurate and slow opening half, the Kings blew the game wide open in the third with star forward duo Jess Wuetscher and Jenae Goven enjoying a night out with three and two goals respectively between the breaks.

The blistering third term was the first time Coorparoo led in the hard slog but the team held on from thereon to entrench themselves in second place on the ladder.

Before their runaway third term, Coorparoo struggled in the contest while Yeronga were the team most damaging on the scoreboard.

A three-goal opening term for the Devils edged the team ahead with a 13-point quarter-time lead. By half time, the margin was seven points.

Yeronga failed to find the scoreboard in each of the second and fourth quarter as the home side had no response to the Kings’ one-two punch inside 50.

Wuteschner, Govan and Yeronga’s Demi Leach all finished with three majors in the contest.

With the loss, Yeronga have dropped to sixth place in the standings with a matchup against Coolangatta awaiting.

The University of Queensland have breathed life into their season, producing a season-defining win over similarly placed Bond University in Round 10.

The Red Lions emerged 42-point winners in the showdown with their university rivals in the team’s second biggest win of the season and have moved up to fifth spot in the ladder as a result.

Bond University managed to get the fast start in the contest, but the Red Lions’ defence managed to withstand a barrage of inside 50s in the opening minutes of the game, and kept the Bullsharks to just one goal in the opening term.

The stout UQ defence quickly turned to offense as the away side booted four goals of their own before the break, including the first of the day from Sharni Webb after a spectacular individual effort from club debutant Kate McCarthy.

Two further goals in the second term extended to the lead to 34 at the main break in a quarter where the Bullsharks struggled to hit the scoreboard; kicking just two behinds.

A clearing hit-out from Bond University ruckman Lauren Bella gave her side an early opportunity in the second half, as B McLaughlin got on the receiving end of her own inside 50 to kick the Bullsharks’ first goal in over a quarter.

From thereon though, the University of Queensland continued to power ahead, and through their surplus of AFLW experienced players, extended their lead well beyond doubt.

UQ added a further four goals in the contest while Bond would add just one more.

Following the win, the Red Lions find themselves just one win behind Bond University and Coolangatta Tweed, but face the unstoppable Wilston Grange this weekend.