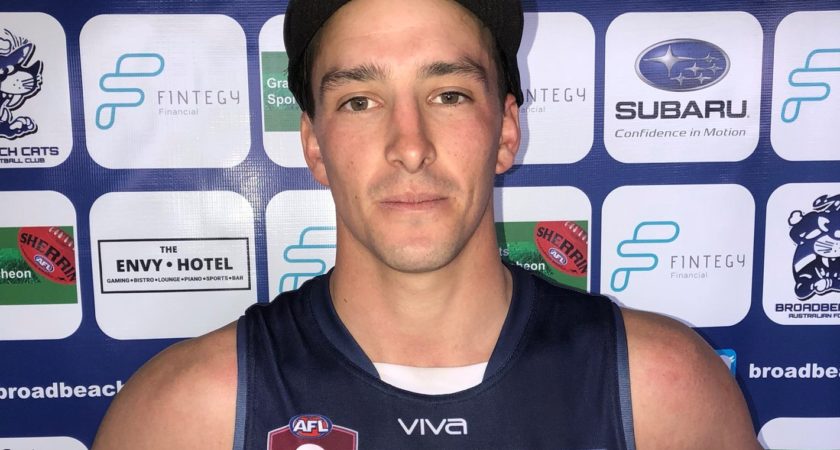 Broadbeach dynamo Blake Erickson has extended his lead atop the Syd Guildford Trophy after Round 9 with a maximum ten-vote performance in the Cats’ win over Sandgate.

Following his best-on-ground performance in Broadbeach’s 148-point thrashing of the Hawks on Saturday, Erickson extended his lead over second place by seven votes in the count.

In his first true season with Broadbeach, Erickson has established himself as one of the competition’s best and most influential midfielders throughout the first half of the 2018 season having been named among the Cats’ bests in six of his seven games this year.

In years previous, Erickson had only played at most four games for the Cats having spent time with both Southport and Gold Coast in the NEAFL, but his first genuine QAFL season is panning out exceptionally for the native New South Welshman.

Erickson’s ten-vote game in Round 10 was just one of many Cats to poll in the Syd Guildford Trophy as Broadbeach enjoyed a clean sweep in the coaches’ votes.

Alistair Nash (nine), Peter Mollison – who moved into the top ten and Campbell Wearne (both five) all boded well following the game.

Voting wasn’t as favourable for the Vultures, with skipper Michael Hamill (one) the lone Mt Gravatt player to feature.

The athletic Mills was complemented well by fellow defender Billy Johnson (two) in the defensive half.

The voting from a tight contest at Sir Bruce Small Park on Saturday between Surfers Paradise and Wilston Grange was indicative of the game itself, as Demons and Gorillas players shared the voting.

Demon forward Tom Howard earned a game-high eights after a consistent performance inside 50.

Cass Haberfield retained his spot in the Syd Guildford’s top two and Daniel Green, who returned to the side this week, earned five votes each in the game.

The remaining votes were divided up between Matt Doran (four) and Gorillas trio Ryan Thomson (four), Joey Daya (three) and Myles Lawler (one).

See the full Round 9 votes below.