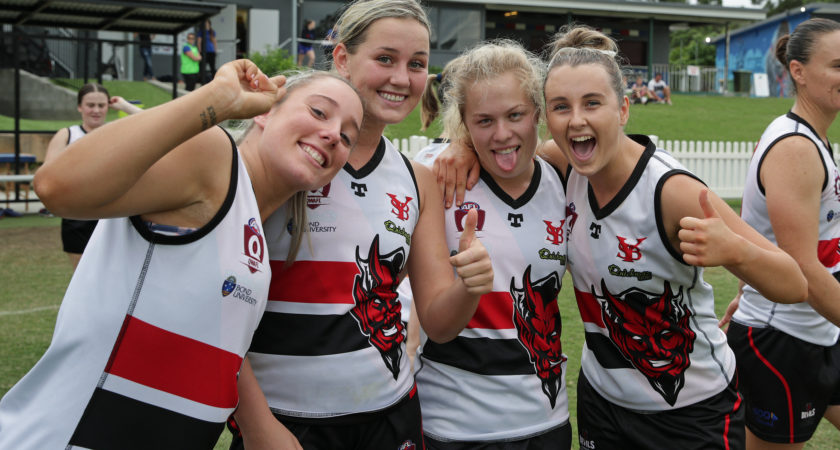 Female footy fans are in for an absolute treat this season, with a plethora of AFLW listed players set to line up in the remaining nine rounds of the 2020 Bond University QAFLW season.

The season came to halt after Round 3, a time when both the SUNS and Lions’ AFLW teams were still competing. However, after an extended layoff, the resumption on July 11 means most AFLW players are keen to play in preparation for the 2021 AFLW season.

Maroochydore and Coolangatta will both be keen to capitalise on their unbeaten start to the season, when they host Wilston Grange and Bond University respectively in the first game back from the COVID-19 imposed hiatus.

Reigning premier, Coorparoo will be keen to regain some AFLW talent in a bid to defend their title. They currently sit in 5th place on the ladder with just one win beside their name.

This year’s finals series takes on a new look, with the top six teams contesting a three week finals series. The Grand Final will be played at Yeronga on Sunday September 28.

“Preliminary indications suggest the majority of QAFLW clubs will boast an increased number of AFLW listed players when they return to finish their season,” Gibson said.

“There’s no doubt the standard of footy will be high, which is not just great for female football in Queensland, but a testament to the work that has been done by so many in positioning the competition as a genuine second tier women’s competition.

“To be able to attend a QAFLW match and see anywhere between 10 – 15 AFLW listed players competing against each other, along with those aspiring to be drafted later this year, is a fantastic outcome for our game,” Gibson added.