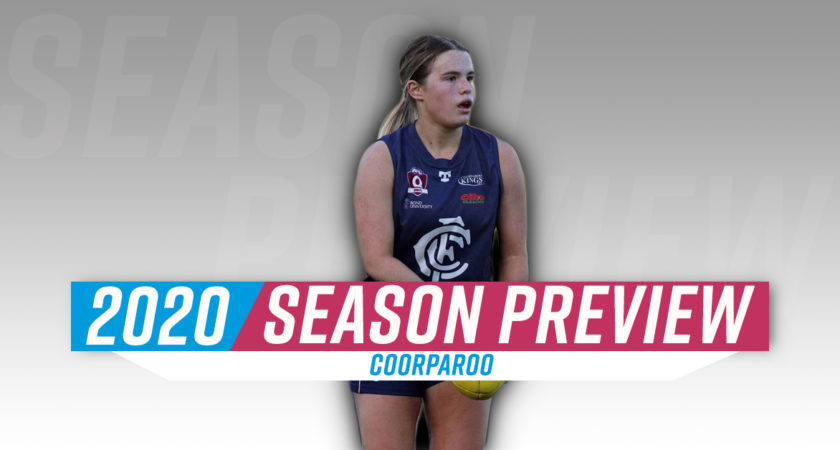 After two consecutive Grand Final losses, Coorparoo finally returned to the top of the QAFLW last year. The Kings blew Bond University away in the big dance and had effectively sewn up the game when the two sides broke for half time. It was their first premiership under coach Michael Hewitt and a landmark moment for the club. Their route to the big win was somewhat strange considering they’d go on to win it all. For much of the season they languished in the bottom half of the ladder before making a late charge to the top four – a fate they secured in Round 14 in a narrow win over Bond University. Jess Wuetschner, Jade Ellenger and Jesse Tawhiao-Wardlaw were all named in the QAFLW Team of the Year.

If it’s not broke, don’t fix it. That’s the mantra at Giffin Park following the Kings’ drought breaking premiership last season. Because in fact, not a lot has changed. Michael Hewitt will return as head coach as they look to retain their title. In the recruitment space, the Kings have once again looked local adding a blend of Kings juniors and Morningside players to the fray.

In just her first season of football, Fetahagic proved she belongs with the sherrin in hand as she stormed to win the Panthers’ Best and Fairest. Fetahagic won out against her Panthers teammates in what was an adjustment season for the club given it was their first in the Division 1 competition which finished with a commendable 14 games. She played 14 games last season.

After playing 100 games for Coorparoo’s juniors, Fraser is one of many players to graduate to the senior ranks. A handy inclusion if Fraser an manage to stay fit, she excels at ground level and thrives in and under.

Charlize, sister of Brisbane Lions star Ally, presents a unique opportunity for the Kings coaching staff this season. While still quite young and raw, Anderson has the right attributes – a great vertical leap and strong hands – to excel. We have seen in the past the Kings’ record of developing tall talent and it wouldn’t be surprising if Anderson is the next name to come through their ranks.

Their in-season adjustments work once again. Michael Hewitt has proven to be one of the sharpest tactical minds in the QAFLW and we saw time and time again in 2019 his pedigree for changing things up mid-season – often moves that would pay off for the Kings. The mid-season additions of Ellie Hampson and Hannah Hillman were exceptional moves while his willingness to shift Wuetschner, Paige Parker and Tori Groves-Little all over the ground also helped immensely. If Hewitt can replicate such magic in 2020 and in the process keep opposition clubs guessing, it should be another fruitful year for the navy blues.

Finals go astray. Despite their success in 2019, it’s quite remarkable the Kings even qualified for the top four in the first place. Through a mixture of player unavailability and injuries, the Kings only qualified for finals in the final round of home and away competition before rounding out the season with three resounding wins in the postseason. There is no doubt Coorparoo will be hoping to change that this time around but with both Wilston Grange and Yeronga missing the cut in their premiership defence, there is proof that anything can happen.