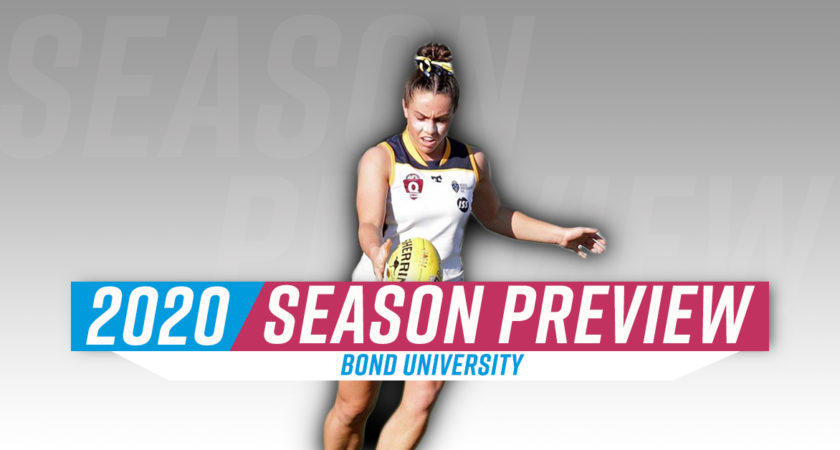 Bond University were the fast improvers for 2019, compiling a dominant season from start to almost finish. For much of the season, under first year coach Shane Atkins, the Bull Sharks topped the QAFLW ladder and through a talented playing list, were the first team to qualify for finals. From there, they beat Yeronga to qualify for the big dance only to be blown out of the water by a rampant Coorparoo side. Their best run of form came from Rounds 2 to 6 where they went on a five game winning streak. Kalinda Howarth topped the competition goal kicking with 31 majors as well as earning team of the year honours alongside fellow Bull Shark Lauren Bella.

Not a lot has changed for the Bullsharks in the coaching department across the summer however the team has seen a high player turnover since last season with as many as 20 new faces joining the team while a host have chosen other clubs as the battle for a spot heats up. Still, the side boast nine AFLW players, who they will undoubtedly regain at some point in the season, as well as a plethora of Gold Coast and Brisbane academy players.

Gundlach joins the Bullsharks having relocated from Adelaide where she shone for Sturt at SANFLW level. She was a standout for the double blues throughout the 2019 where she kicked four goals across her ten games. Previously, she had plied her trade for both Salisbury and Golden Grove and played for South Australia at the AFL Women’s National Youth Girls Championships in 2015.

The Mackay product has moved to the state’s south east as she enters her draft eligible year in 2020 and will ply her trade with Bond University. A versatile tall, Tarlinton played in both the ruck and defence for Queensland at Under 18 national level in 2019 and also played a handful of games with Coorparoo following the national championships.

Other avenues to goal can be found. It’s obviously known that you need to be able to kick a score to win a game of football, something which Bond University did often last year. Kalinda Howarth led the way with 31 majoes while Esther Boles (12), Taylor Smith (11) and Molly Ritson (8) rounded out the top four for the Bullsharks. Three of that quartet are now AFLW players and will likely miss a portion of the season. If they are to miss, it will be up to Boles and co to ensure the side can continue to mount a score.

Player continuity doesn’t gel. With such a talented roster, Bond University’s playing stocks are in good hands, and will surely deliver on most instances throughout the season. Yet with players featuring at higher levels, that brings about a high amount of changes from week to week. With that frequent turnover of personnel, it soon becomes difficult to establish that same synergy on field which could become an issue down the stretch.