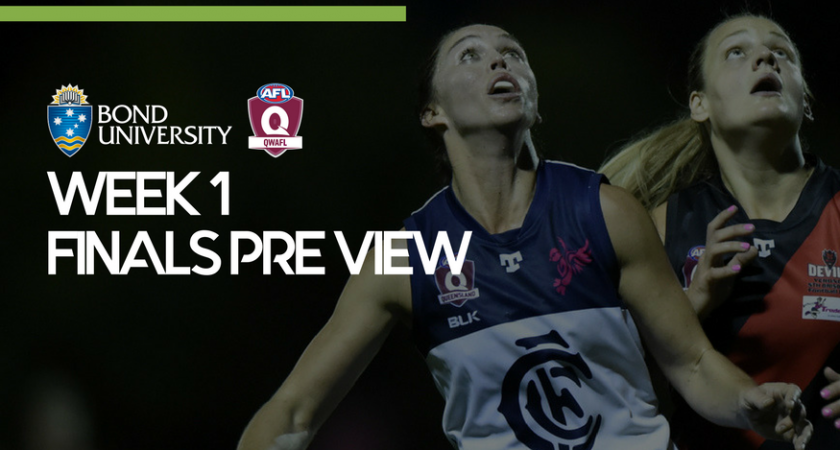 We’ve hit that time of year everyone looks forward to. Finals footy. It’s sudden death for these two rivals, the grudge match of the QWAFL this year. Wilston Grange and Coolangatta have had a couple of thrilling matches during the season, highlighted by the tie in round 14 but the Bluebirds have just been unable to get the four points. They’ll get their third opportunity on Saturday afternoon, when the mercury is tipped to hit as high as 30 degrees.

Coolangatta come into the match with a few changes from last week. The most notable absentee is Zoe Lattanzi, who has succumbed to her troublesome ankle injury to be ruled out for the season. She joins the growing list of Coolangatta casualties, including Hannah Sexton who will also not be returning with her broken finger. In good news, Ruby Blair is back in the side after pulling out at the eleventh hour with illness last week. The Bluebirds also have a couple of players they are giving until game day to prove their fitness, with Nikki Wallace a surprise inclusion in that group. Wallace has recovered remarkably well from her own ankle injury which was originally thought to be severe enough to rule her out for the season. She’d be a big inclusion if fit, with her work around the stoppages likely to be an invaluable asset on the day.

Wilston Grange will be bolstered this week with the big inclusion of captain Courtney Daniec who has recovered in time to lead the side when it counts. Centre half-back Hetti Malone is in doubt with a suspected tear to the groin and would be a big loss down back for the Gorillas if she doesn’t make the cut. Kate Lutkins is going to be a key player for the Gorillas on the day, cementing her standing as a playmaker to be the difference between the two sides back in round four.

There’s going to be a couple of ripper matchups around the ground which are sure to draw the eyes of spectators on Saturday. We’ve got Wilston Grange’s Jamie Stanton likely to be coming up against Maddy Roberts from Coolangatta, two fierce competitors who can single-handedly turn the game off their own boot when they’re on song. Despite being ex-teammates, there’s certainly no love lost between the two as Stanton jumped ship from Coolangatta to join the Gorillas in 2017. Roberts got the win in their mini-matchup last time, so expect to see plenty of fiery action this time around as Stanton returns serve.

We’ve heard a lot of mate vs. mate battles this year, especially with the Lions AFLW players scattered across different clubs, but it’s not often you get a sister vs. sister showdown. While they may not play on each other an awful lot, it will be interesting to see which Membrey sister has the better game on Saturday. Kara has been one of the most consistent for Coolangatta this season, with her ability to rack up possessions helping to guide Coolangatta home on more than one occasion. On the other hand, Jordan has been in and out of the side with injury, but when she’s fit and firing can be a real handful for opposition sides. Jordan is another ex-Bluebird which will no doubt provide extra motivation for Coolangatta to try to shut her out of the game.

“We don’t really have too many rivalries within the competition, but definitely Coolangatta are our biggest rivals so it’s nice we have them in an elimination final.”

“Last year the Bulldogs finished seventh and went on to win the AFL Grand Final. We might be fourth but all it takes is three good games from here.”

What many believe will be a grand final preview is set to unfold at Giffin Park on Saturday. 1 v 2, Coorparoo against Yeronga. The Kings are the form team of the competition, whereas the Devils have the star power. So who wins?

Yeronga take one of their strongest sides of the season on paper into the clash, with every Lions player available except Delissa Kimmince. Sabrina Frederick-Traub is one of those coming back into the side after pulling out of last week’s match at late notice. Emily Bliss has been cleared to make her return after sustaining a concussion in a match a few weeks ago. The ruck stocks will also be bolstered with the return of Erica Fowler who has spent a lengthy stint on the sidelines but is tracking for a return on Saturday.

Coorparoo are in a similar situation, having close to a full strength side set to hit the park. Emma Zielke comes back in to the side after missing last week through work commitments and will line up alongside fellow Lions representatives Britt Gibson, Jessica Wuetschner, Ally Anderson and Kate Deegan. Brooke Spence is a possibility to return after being out with injury for a couple of weeks but will need to prove her fitness.

The key matchup in this one will be the royal rumble in the ruck. Jessy Keeffe has been in scintillating form these past couple of weeks, relishing taking on the sole ruck responsibilities in Fowler’s absence. However with Fowler back this week, the duo will likely resume working in tandem as they have done for the majority of the season.

They’ll come up against Coorparoo workhorse Emma McKenzie, who has completely transformed from WNBL player to ruck revelation over the course of the season. Her exploits have even been impressive enough for McKenzie to earn a spot in the Brisbane Lions train-on squad. While Fowler and Keeffe are two prime candidates on Brisbane Lions AFLW coach Craig Starcevich’s list for the vacant ruck spot, you’d have to imagine McKenzie’s stellar rise would at least get her name mentioned in that conversation. There might be more on the line for the winner of this battle than just a grand final spot.

“We’re looking forward to this weekend. It’s been a pretty good week on the track but we’re now the hunted so we really need to absorb the pressure of these other teams that are coming for us and then play our own game plan which has been working for us all year.”

“We’re confident but we’re very cautious with Coorparoo because they’re a quality side. We’re going to have to be at our best to win. It’s good that we’ve got a second chance but it’d be nice to not have to use it.”