Behind the lens: How Footy Focus brought two photographers’ dreams to life

On September 30, one lucky community photographer will be announced as the winner of the #FootyFocus21 photography competition. Their prize? To shadow and shoot with AFL chief photographer Michael Willson at a match during round one of the 2022 Toyota AFL Premiership Season.

You might think this is where the Footy Focus competition’s story ends. But as up and coming photographers Russell Freeman and Grant Viney will attest, what can happen next is just as rewarding.

Russell is a freelance photographer based in Brisbane. His sports coverage, including basketball and AFL, has him in demand from sporting clubs and media outlets alike.

Grant regularly shoots for the Penguin Football Club in Tassie, as well as chasing images of competitive mountain biking. That’s when he’s not at his day job as an underground miner in Western Australia.

Both Russell and Grant entered the inaugural AFL Footy Focus photography competition in 2019 on the encouragement of family and friends, and both ended up making the top 10 with these spectacular snaps: 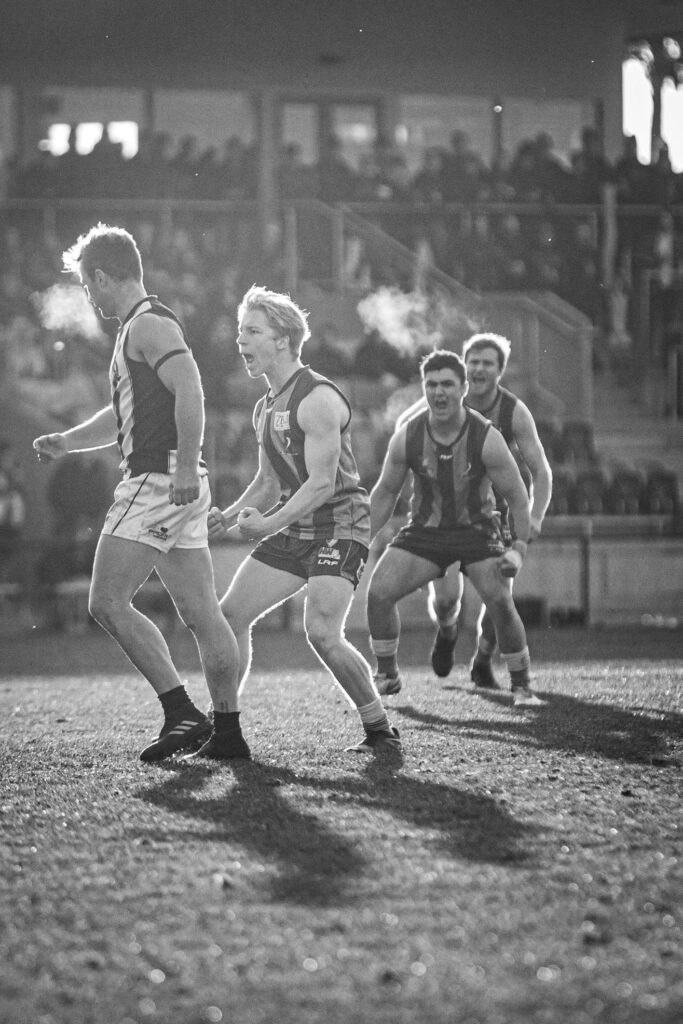 Whilst neither took out the final prize, both Freeman and Viney became members of the Footy Focus Studio – a group of exceptionally talented budding photographers from across the country, made up of past entrants as well as carefully selected stars of emerging photography.

The group is encouraged to share their work for feedback and is often tasked with challenges where the results form content series on AFL digital channels.

“The ability to share photos and ideas with like-minded people has contributed to me becoming a better photographer”, Russell says.

“Confidence is key and having such a great support network around me has helped me develop in leaps and bounds.”

Grant adds: “I appreciate the help and support I receive from everyone in the group. My photography has improved; I am learning to tell stories through images on and off the field.”

This year and last has seen the AFL calendar face incredible challenges. However, ever-changing fixtures and relocations have presented opportunities for photographers like Russell and Grant to take the big stage.

With some games relocating to Tasmania this season, Viney was invited to shoot for AFL Photos, including two matches in the first week of the Toyota AFL Finals series.

“The speed and intensity of the elite game is next level,” Grant says.

Filing images live during the games has been a big learning curve, as well as expecting the unexpected.

“During the Bombers v Doggies elimination final, the mount on my 70-200 lens nearly came off,” recalls Grant with a shudder.

Thankfully, the groundskeeper at University of Tasmania Stadium had a little screwdriver and Grant was out of the woods and shifted his focus back to the on-field action.

“The highlight has been seeing my photos appear in newspapers and social media,” Grant says.

When much of the AFL action relocated to Queensland in 2020, a similar opportunity was presented to Russell when he was called upon to cover a number of AFL content requirements.

“Shooting training sessions of AFL teams, AFL Draft Combine and covering elite matches including the 2020 Grand Final are opportunities that I originally could only have dreamed of.”

When prompted, it’s hard for Russell to say if it’s community footy or shooting at the elite level that he loves best.

“Shooting at local grounds, you never know what’s going to happen or what you might capture. Cars parked right up against the fence, the old-style scoreboards, BBQ’s, volunteers, shooting on fields that look like dustbowls; there’s always something new to capture that you may not see at a large stadium” he says.

“Then again, shooting the elite game requires the ability to multitask and always be alert as to what is happening. You get to photograph the absolute elite of the sport, and to experience an atmosphere like no other.”

Russell’s biggest highlight from 2020, however, was travelling around Queensland as the official photographer for the Toyota Premiership Cup Tour.

“Seeing how much footy meant to the communities and locals as we travelled was heart-warming.”

Coincidentally, Russell has now passed that baton on to another Footy Focus Studio member in Tamati Smith who is covering this year’s tour in Western Australia.

If there’s one word of advice Footy Focus alumni Russell and Grant both have for others who are keen on shooting at the top level, it’s practise.

“Get to as many local games as you can; like anything the more you practise the better you’ll become,” Grant says.

For Russell, it’s a similar sentiment.

“Shoot everything and anything. Understand your camera and what works best for every scenario. Build a portfolio, volunteer at every match and event possible, network with your local clubs, challenge yourself. Most importantly, have fun,” he says.

Time is running out to submit your Footy Focus entry! Enter #FootyFocus21 here for your chance to shoot with AFL Chief Photographer Michael Willson