Beginners Guide to the AFL Draft 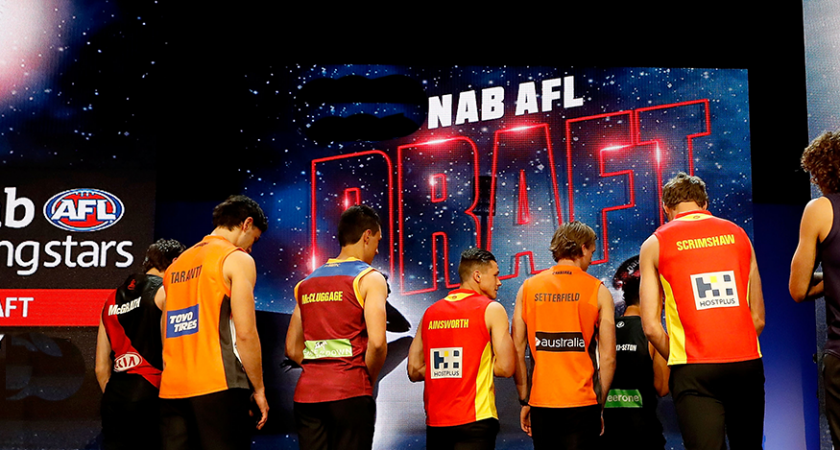 At its core, the annual NAB AFL draft is about new or unsigned players joining Australian Football League clubs. But for those of us who want more of an explanation on something that can be a little confusing, I have created a beginner’s guide to the NAB AFL Draft just for you.

So, let’s start from the very beginning, a very good place to start. The first step is to understand who exactly is eligible for the AFL national draft. The answer is players who are turning 18 or older in the year they’re hoping to be drafted. Meaning many are school leavers, alternating between their books and pens and the Sherrin.

Another element to the draft, is the NAB AFL National Draft Combine in which nominated young  players from around Australia, are invited to attend. This is where they can show perspective clubs all they have to offer and get to nitty gritty details in interviews. Usually about 100 or so players attend the combine and the best 50 or so are selected for the NAB AFL Draft.

Throughout the year, young players also play in a variety of competitions around Australia under the watchful eye of recruiters. Perhaps the most well-known of these is the NAB AFL Under 18 National Championships.

So, now we have our pool of draft prospects, but how does AFL decide which team gets to choose first? I mean surely there must be some kind of system otherwise all clubs would be like a flock seagulls chasing after the highest draft pick saying mine, mine, mine, mine.

Well lucky for them, the AFL have got it covered. To help promote fairness and an equal league, draft picks are determined by the club’s performance in the calendar home and away season. And no, this isn’t referring to a TV show performance, although club performances on their own would be very entertaining.

Yes Queensland, that means it’s not all doom and gloom for our teams the Brisbane Lions and the Gold Coast SUNS. This year after finishing on the bottom the Lions received the highest draft pick and the Suns received the second highest, for finishing just ahead of Brisbane. This should help them kick start their hopefully positive futures. Picks continue using this model until all rounds are complete.

Seems pretty straight forward right? It’s like picking teams in the school yard, where the sporty people get chosen first and then the not so sporty get left till last. Unfortunately, it’s not as simple as that, with the addition of priority picks, just to make things a bit more complicated.

Priority picks are additional draft picks, occasionally given under special circumstances to struggling teams to give them a performance booster. Factors such as the number of premiership points that a club has received, a club’s point percentage and finals appearances and premiership wins in recent seasons, are all considered to determine eligibility. Something I could have really used in high school to help my team win the competition for once.

There’s one last aspect that’s worth mentioning, especially for Queenslanders. If you didn’t know already, teams from Queensland and New South Wales have some unique rules around players from those states, to help grow our game in those areas. Academies aligned to AFL clubs in these traditionally ‘non-football’ states, have been created to help better develop talented local juniors and ultimately strengthen their AFL clubs.

To help keep the competition fair while still giving clubs with academies an incentive and advantage to drafting their local talent, a bidding system has been recently introduced. Picks are weighted with a value index and every draft pick has been allocated a numerical value.

Pick one is worth around 3000 points, and pick 73 is worth about nine. If a draftee is a from one of the four northern academies mentioned above, the Swans, Giants, Lions or Suns will receive a discount when matching a bid placed on them from another team. Northern clubs are able to use their lower picks, taking advantage of the discount, to move up the order of the draft to take their academy player where the bid comes in. The same rules apply to father son players.

Everyone loves a bargain.

And that folks, is your beginners guide to the NAB AFL Draft!