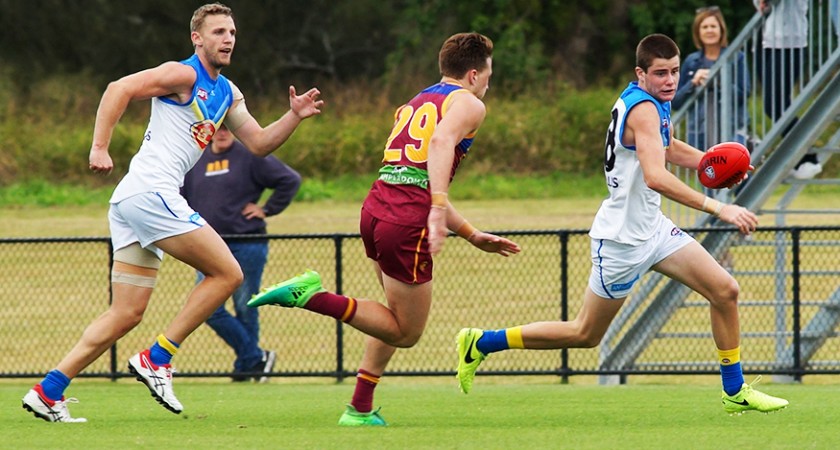 Photo: David Layden. Bailey Scott in action for the Gold Coast SUNS NEAFL side, in round 11 of the NEAFL.

The Allies went down to a strong South Australian outfit at Adelaide Oval on Saturday, in round two of the NAB AFL Under 18 National Championships.

The SA bottom agers, led by the 194cm Jack Lukosius, proved the 2018 Draft is set to be a bumper crop.

After staying in the contest up to half time, the Allies couldn’t stop the rampaging crow-eaters, who kicked six unanswered goals in the third term to run away with the game.

South Australia’s Darcy Fogarty, a possibility to be taken at number one in this year’s NAB AFL Draft, showed some flashes of brilliance and popped up all over the ground.

From a Queensland perspective, the best performer was young Bailey Scott, the son of former North Melbourne and Geelong player Robert Scott. The bottom ager, who played his first game of the national championships, picked up 14 disposals and slotted two goals in the last quarter.

Scott was a Burleigh junior and is a member of the Gold Coast SUNS Academy.

It was an interesting outing for the highly touted Connor Ballenden, the Lions Academy prospect playing the majority of the game in the ruck, collecting 18 hitouts.

Ballenden also reeled in five marks, but wasn’t as influential as he was across the back half of the Academy Series.

Lions Academy player Jack Payne had a solid game in defense, putting together five rebound 50s and showing his ability to play a role as a dependable tall defender.

Both the SUNS and Lions academies recently finished playing in the Academy Series, which replaced the division two carnival for the first time this year.

The Allies play their next game of the National Championships against Western Australia at Leederville Oval on June 25.