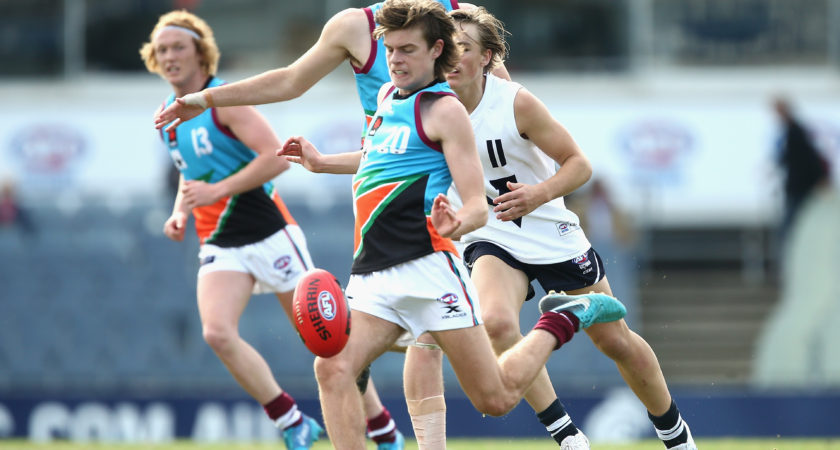 The Allies Under-18 representative team has commenced its preparation for their opening fixture of the NAB Under-18 National Championships this weekend.

Following the NAB Under-18 Academy Series, which included teams from Tasmania, the Northern Territory and the respective Brisbane, Gold Coast, GWS Giants and Sydney Swans Academies, the best 50-players were selected to represent the Allies squad.

All 50 selected players have been retained for the national championships, however only 23 can be selected to play in each of the Allies’ four games throughout the championships.

In total, 16 Queensland players made the 50-player squad, including eight from each of the Brisbane Lions and Gold Coast Suns Academies.

Tasmania were the most well-represented state or territory in the squad, with 13 selections, including Tarryn Thomas, who was named the Hunter Harrison Medallist for his performances throughout the Academy Series.

Allies head coach, Adrian Fletcher, implored his team to embrace the challenge of the tougher level of competition at the NAB Under-18 National Championships.

“If you can handle the pressure, it’s a massive opportunity. It is a step up for sure. It’s the chasing pressure that goes up and the ability to be clean at ground level when the pressure’s coming and decision making in time and space.”

“It means the best kids get to play against the best kids in Australia, so they have a great opportunity to test themselves, and recruiters get to see them on the centre stage.”

The Allies have already played two practice games in the lead up to their championship opener this weekend as the side travelled to Melbourne two weeks ago to face the Victoria Country and Victoria Metro teams.

Both games were played on the same day, meaning all 50 of the Allies squad had the opportunity to push their case for a regular spot in the side.

Queenslander Connor McFayden booted four goals as the Allies squad enjoyed a 27-point victory against the Country team in the first match, while the team suffered a 23-point loss to Metro in the second.

Following the performances of the squad in both matches, Fletcher was full of praise for his team.

“I was very proud of the group and how they reacted to the higher level of competition,” Fletcher said.

“Metro had a number of bigger bodies, but we always competed. We had a lot of inside 50s too, but we didn’t make the most of our opportunities.”

Ahead of this weekend’s game against Country, Fletcher said the team’s focus isn’t so much on the scoreboard, but in ensuring their key performance indicators the team has set are reached.

“I’m not really worried about the scoreboard as much as I am their ability to play under the pressure and the intensity.”

“The biggest thing I crave from the players is the intensity. Don’t give me some soft efforts; you must be consistent and put your head over the ball 100% of the time.”

Following the showdown with Country, the Allies squad will trek to Queensland to face Victoria Metro at Southport’s Fankhauser Reserve on June 16 at 11am.

After a bye in Round 3, the Allies will round out their National Championships at GMHBA Stadium in Geelong against South Australia on June 29, and at Etihad Stadium against Western Australia on July 4.