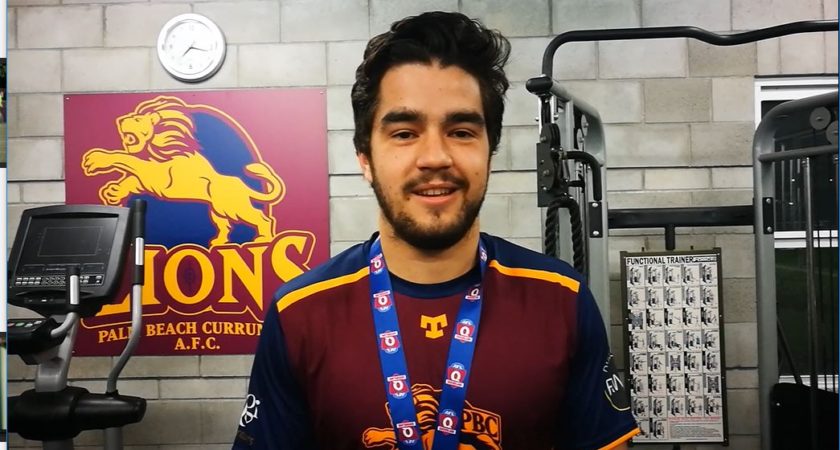 THE Palm Beach Currumbin High pipeline continues to churn out the talent with one of the school’s old boys the QAFL Rising Star nominee for round seven.

Alexander “AJ” Dawson, a 20-year-old, has played every game for premiers PBC Lions this year and it has been his consistency and steady improvement as a half-forward flanker that led to his nomination this week.

Like so many Lions players, Dawson is a product of the PBC High system, although he is not a PBC junior. He played his early junior days with neighbours, the Burleigh Bombers, before finding Salk Oval to launch his seniors career.

It was with the Bombers in 2015 that Dawson played several senior games in the same team as younger brother Jacob Dawson and a big bloke named Brayden Crossley.

Dawson has watched on as Crossley has made his AFL debut with the Gold Coast SUNS this year and only last week Jacob was elevated from the rookie list and he, too, is poised for an AFL debut at Metricon Stadium.

“I’d love to join them, but it is fair to say I probably have a bit of a longer road to go to get there,” Dawson said in all honesty.

It has been this frank self-analysis that has led to Dawson getting a Rising Star nomination.

He has listened to what Lions head coach Chad Owens has told him and has taken on the challenge.

Owens had first-hand knowledge of what Dawson could do in his role in the Palm Beach Currumbin High School’s elite Australian football program.

“Now he’s into his third year with Palm Beach and went straight into the reserves from high school.

“He had half a dozen seniors games in 2016 but just the one last year – and that’s because he had things to work on.”

It has been all about role playing for “AJ”, according to Owens, doing his job so everyone else can do theirs.

“He has taken it all on board,” Owens said. “He used to kick and stop, now he’s kicking and running on.”

So has this assessment been a fair call?

“Yes it has,” Dawson said emphatically, conceding it had been too much about his own numbers rather than the team thing.

“Last year I was probably more concerned about how many touches I was getting – I was a bit caught up in personal stats, to be honest.”

One gets the feeling that Dawson is close to cementing his spot in PBC’s top 22 players but he knows he cannot slacken off for one moment.

“I know I have to work hard because there are plenty of good players to come back,” Dawson said as he mixes football with a sport and exercise science degree at Griffith University.

“I’ve got to keep the head down and bum up because this could be a pretty special side to be a part of at the end of the season.”

He made his QAFL seniors debut in round four of 2016.