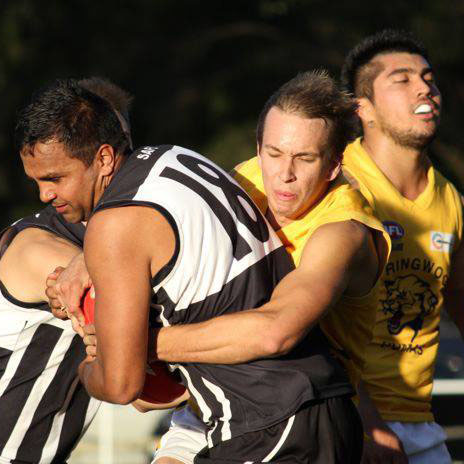 Springwood continued its incredible unbeaten run, with a win over the Western Magpies at Chelmer.

Welcoming back Albert Proud and captain Mark Thompson into the side, the Pumas’ hardened bodies were the difference against an undermanned Magpies outfit, missing classy midfielder James Rozynski among others.

And their bigger bodies asserted themselves from the outset, with the visitors kicking the first six goals of the game.

While the Magpies had plenty of opportunities in the opening term, the Pumas’ defensive pressure, led by impressive efforts from youngster Matt Preston-Smith and Greg Friis, forced turnovers in almost every forward entry.

Springwood’s bullish start was a bit out of step with the Pumas’ recent efforts, but it was a change that coach Tony King was glad to see.

“When the game was up for grabs at he start, I thought the boys’ intensity was really high and I was really happy that they… took control of the game.”

When Proud kicked the opening goal for Springwood in the second to make it 7.3-1.2, the Pumas looked set for a massive blowout, but the Magpies continued to fight their way back into the contest.

Four unanswered goals to the home side in the last term put the margin back to four goals but the Pumas’ experienced campaigners lifted once again, with former Brisbane Lion Rhan Hooper kicking the sealer on the game.

King said his side’s size and experience made a major difference against the injury-depleted Magpies.

“I think we’re running the games out really well, we just have those periods where we drop off.”

“It ‘s really hard to keep that intensity up but… Hooper kicks a big goal and it just gets us back on track.

“We’re really fortunate we’ve got a couple of players like that to get us back in action again.”

Western Magpies coach, Craig St John, wasn’t sure how to feel after the loss.

“I’ve got mixed feelings,” he said.

“We got our hands on enough footy, but we turned it over.

“We were timid at some contests, hard at others. It was just a bit of an indifferent game for us.”

Despite the loss, the Magpies remain in finals contention, sitting in fifth, and with a number of players set to return in coming weeks, St John was confident his side will improve.

“They’re (Springwood) the benchmark but we only lost by seven goals,” he said.

“When we get everyone back, we can bridge that.”

“Our second half of they year was always going to be better than our first half, so we’re hanging on to that thread.”

A 10-goal third quarter from Wilston Grange triggered a dominant victory over Coolangatta.

After a tight first half ,the Gorillas turned up the heat in the third, led by strong performances from senior players Dave Kettle and Dan Brittain.

The win gives the Gorillas a valuable percentage boost in a cluttered top four, leaving them in third at the season’s halfway point.

A red card to Coolangatta’s David Lynch, left the Blues a man down in the second half.

“We weren’t upset with our efforts, especially since we only had 18 by the end of the game.”

“We weren’t quick enough to man up on rebounds when we turned the ball over and that resulted in a lot of goals for them.”

“We haven’t had a bigger win against the bottom teams, so it was good to get our percentage up a bit.”

“We just tried to be as hard and physical as possible.”

“After half-time, my focus was on leaders to step up.”

“They all started to lift and brought everyone else into the game.”

Surfers Paradise picked up a third-straight win against Maroochydore yesterday.

After splitting the points with a draw in their last match-up, the Demons were hungry to make sure took all four points this time around, and did so in comfortable fashion.

Jake Ryan finished with five goals, while young gun Cassidy Haberfield was impressive through the midfield.

Maroochydore’s Nigel Baker was solid in defence for the Roos, while Cameron Stevenson was strong in his return from state under-18 duties.

“Last year, we drew and come September, we didn’t’ have the finishing position we wanted, so we put a lot of emphasis on that and made sure we got the job done.”

“I think our ball use is certainly improving week to week and I thought our defensive element of our game improved again.”

“They’ve got great leadership and a very young enthusiastic and developing group.”
“We’re always wary on the road and particularly with the improvement that we’ve seen
from them this year.”

Brett Maloney (Maroochydore):
“I think we kicked ourselves out of the game.”

“Certainly for two and a half three quarters, we thought we were in the game.”

“You’ve got to take all your opportunities and if  you do that, it changes your mindset.”

Palm Beach put on a clinic to pick up their biggest win so far this season, against UQ at Salk Oval.

The Lions were a class above the students, who had 10 forced changes to their side this week.

It could have been a far larger margin had Palm Beach improved its goal accuracy, with 62 scoring shots to 15 for the match.

Palm Beach captain, Angus Munro, starred for the home side and Nathan Carr kicked seven, to lead the scoring.

“It probably rates among our best wins for the season.”

“The guys learned some valuable lessons (last week) and came out with a really good attitude and played some really good footy.”

“It’s going to be pretty cluttered up the top, come the business end of the season, so if you can get a really healthy percentage it can be like four points.”

“It was a really tough day for us.”

“We had 10 changes from the week before …but the reality is that Palm Beach are a very good team.”

“We were playing against a much better team.”

“The guys still gave a good effort and that’s all we can really ask for.”

The Tigers set the tone with a five goal to nil first quarter and rolled on from there, keeping the Hawks goalless at the major change.

After forging a reputation as a hard-fighting team all season, the young Hawks were exposed by the Tigers in a sub-par performance.

Midfielder Shaun Daly had his best game of the season for Mayne, along with Liam Bourke and Josh Duffy.

“It was a hell of a win. We were worried about the game to win and win convincingly was terrific.”

“It was a good all round effort by everybody.”

“I think we had the edge in the contested ball. It was a bit of a scrap for most of the day and that suited us.”

“That was our worst performance of the year.”

“They were a lot better in every facet compared to us. They worked harder, ran harder and were a lot more committed.”

“In all of our games this season, we’ve been competition at some stage, but at no stage were we competitive.”

Burleigh suffered its second straight loss by less than a goal, in a bottom of the table clash against Noosa.

The Bombers were in control at the final change, but the Tigers stormed home to take their second 2013 win.

Noosa’s win was marred by a broken jaw to teenager Ben Gray, in his second game for the club.

“Four goals in front at three-quarter time – you shouldn’t lose then.”

“For three quarters, we controlled the game and played the way we wanted to play it.”

“We’ve come a long way in seven-eight weeks, and we just need to find a  way to get over the line.”

“They’ve worked extremely hard and have for some weeks. Good to see them get some reward for their efforts.”

“We finished the game off extremely strongly.”

“It’s been an area we’ve struggled but yesterday the players stood tall and that last quarter was probably their best quarter of footy.”