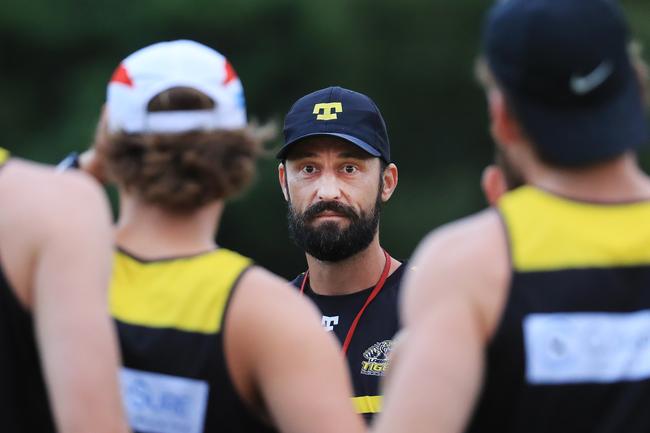 A former Sydney Swans and Gold Coast SUNS player, Nick Malceski played 210 professional AFL games in his 14-year career capped off by winning a premiership flag in 2012 and earning all Australian selection in 2014.

After retiring in 2016 Nick made the move to coaching, spending five years in coaching roles at the Gold Coast SUNS, including head coach of the SUNS NEAFL team.

At the start of the 2021 QAFL season, Nick was announced as the new Senior Coach of the Labrador Tigers.

Prior to this announcement, the club had finished second the last three years in a row, and there was a feeling of disconnect across the club.

From the moment Nick arrived at the club he has been focused on building a strong culture based around the attraction of quality people. Previously, the club had never done any work on defining who they were and what they stood for. Nick instigated work to define the club’s trademarks and the measures around how each player, coach, and volunteer would be held accountable.

Nick has a really strong focus on communication at all levels of the club and works extremely hard to ensure all players from the Colts, the Reserves, and the Senior side understand where they are at and areas they need to improve on, both on and off the field.

Nick gets the best out of his players, and for the first time, anyone can remember all three grades are on top of the ladder. The focus on attracting quality people first and foremost will be a lasting legacy for the Labrador Tigers.