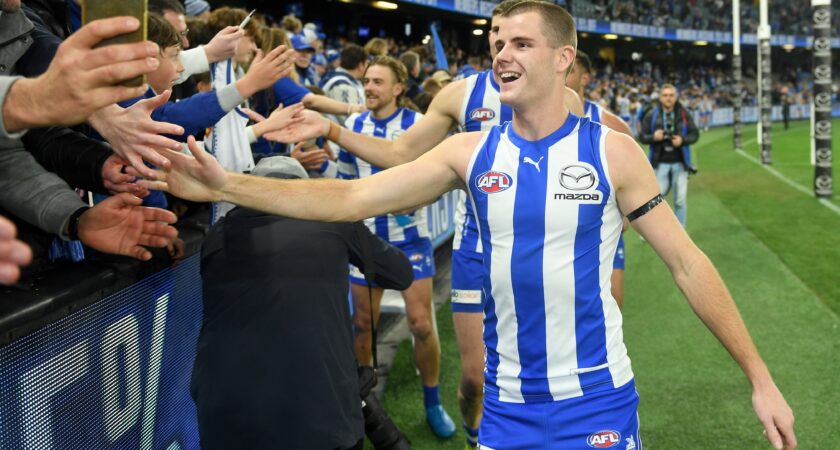 Bailey Scott will never forget the week of his 50th AFL game. A birthday, a heart-breaking loss, a coached sacked, a surprise appointment as caretaker coach and a sensational win to end a 14-game losing streak.

The Gold Coast SUNS Academy graduate, now in his fourth season at North Melbourne, rode the rollercoaster of AFL football to produce the best performance in the best win of his career.

But there is more to come, with a place in Queensland football trivia history.

It all started on Scott’s 22nd birthday last Saturday week (9 July), when North led Collingwood by 26 points at three-quarter time only to lose by seven points.

Three days later David Noble, the longest-serving coach of his short career, was sacked and Leigh Adams was preferred to the vastly more experienced John Blakey as caretaker coach.

Then on Saturday, having gone 111 days without a win, Scott played a key role in North’s drought-breaking win over recent power club Richmond.

Critical with his use running off half back, Scott had 26 possessions, kicked a nice goal and had five score involvements in the Roos’ heart-stopping four-point win.

So good was he that for the first time in his career he was included in the voting for the AFL Coaches Association Player of the Year, picking up one vote.

Scott, who chose to go to North Melbourne under father/son rules after rejecting a pathway to Gold Coast via Academy concessions and Geelong under the same father/son rules, was the 76th Queenslander to play 50 AFL games.

And already he’s in a club with a difference, having become the ninth member of that group to have played under four different coaches in his first 50 games.

It has been an eventful ride for the son of 245-game Geelong and North utility Robert Scott, who played in the Roos’ 1996 premiership after grand final losses with the Cats in 1989 and ’92.

He waited more than 12 months to add 13 games in the Covid season of 2020 under Rhyce Shaw, and after caretaker coach turned full-time appointee Shaw stepped away for personal reasons, he found himself under ex-Brisbane football boss turned North coach Noble for his next 32 games in 2021-22.

And then finally he got to 50 under Adams, a 104-game North player from 2007-15 and a coach he had been doing his utmost to avoid in recent times. Not for any sinister reason but because Adams, who had re-joined North under Noble in 2021, had taken charge of the North Reserves this year.

It had been widely expected that Blakey, a 359-game Fitzroy and North Melbourne player, would be appointed caretaker coach. After all, he won flags as a player at North in 1996 and 1999 and a third at Brisbane in 2003 during a four-year stint as an assistant coach under Leigh Matthews.

It wouldn’t have been the first time Blakey had done such a job, having filled in for Matthews at Brisbane in 2005 after Matthews’ mother had died before spending 14 years in various senior roles under John Longmire at Sydney ahead of his return to North under Noble in 2021.

It would have been something of a reunion given Blakey and Robert Scott had been premiership teams at North in 1999, but the surprise North decision to go with the less experienced Adams threw another twist to a tale that will be recounted many times in years ahead.

And yet, with North searching for a high-profile senior coach to take charge next year, barring a further unexpected twist Bailey Scott will play under a fifth different coach in 2022.

If he plays each of the last five games this year that would make five coaches in 56 games! A Queensland record, surely? No.

As Scott is set to do, Voss had five coaches inside 56 games – John Northey, Roger Merrett (caretaker coach) and Leigh Matthews at Brisbane and Malcolm Blight and Grant Thomas at St.Kilda.

But there is one even better. Petterd, a Broadbeach product like Scott, had six different coaches inside 56 games. He played under Neale Daniher, Mark Riley (caretaker coach), Dean Baily, Todd Viney (caretaker coach) and Mark Neeld at Melbourne, and finished his 84-game career under Damien Hardwick at Richmond.

Scott McIvor, 200-game Fitzroy and Brisbane star of the 1980s-90s, holds the Queensland record for most different coaches at eight. And he had two stints in different colors under Robert Walls.

The former Wilston-Grange junior and Queensland Teal Cup (U17) captain played under Walls and David Parkin at Fitzroy before returning ‘home’ to Brisbane to close out his career under Peter Knights, Paul Feltham (caretaker coach), Norm Dare, Walls, Northey, Merrett and Matthews.

While Scott was the Queensland feelgood story out of Round 18, there were other standouts.

In the same game Richmond’s Noah Cumberland was a livewire up forward with 14 possessions and three goals. And he had seven scoring shots, missing four tough shots to finish with 3-4.

With Jack Riewoldt’s radar even more seriously off – he kicked 2-6 – Cumberland was the Tigers’ most productive forward as he continued a bright start to his career in a brave loss to the Kangaroos.

Having been the unused medical substitute on debut against Sydney in Round 11, he kicked 10-2 against Gold Coast in Round 17 before his effort against North, which was rewarded with three votes in the AFLCA Player of the Year award.

But the big Queensland vote-getter in Round 18 was Keidean Coleman, who picked up five votes to rate second only to best afield Hugh McCluggage (10 votes) in Brisbane’s 40-point win over the GWS Giants in the club’s first visit to Manuka Oval in Canberra.

Continuing a brilliant third season at AFL level in just his 34th game, Coleman had 25 possessions and kicked a beautiful long goal, and was the game’s most damaging defender with his spearing left foot off half back.

In another positive for the Lions, vice-captain Harris Andrews earned one vote from the coaches for his 12 possessions and 12 one-percenters in a form lift critical to his side’s finals hopes.

Peter is a consultant for Vivid Sport.