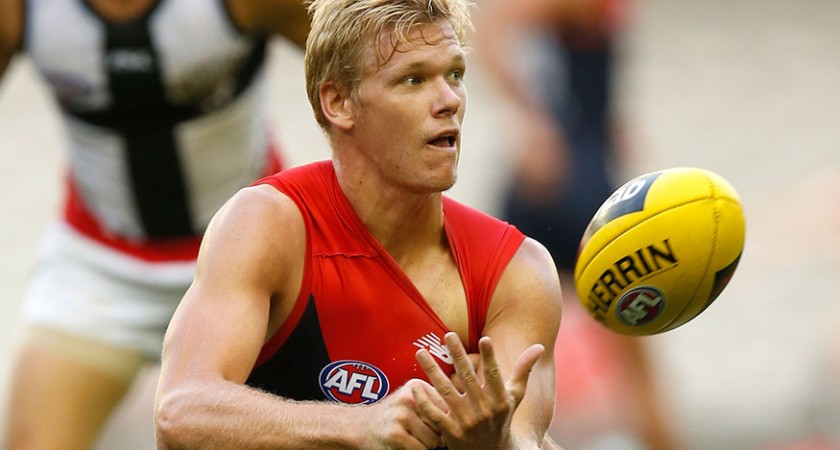 Former Sandgate junior and Aspley star Josh Wagner will complete a fairytale journey with his AFL debut for Melbourne on Sunday.

The 21-year-old running defender was elevated from the Demons rookie list to the senior list on Thursday, and included in their 25-man squad to play North Melbourne at Bellerive Oval in Hobart.

And although bracketed among seven interchange players that will be trimmed to four on Friday night, the Demons confirmed via social media that Wagner will definitely be in the match 22.

He was told Thursday afternoon that he will be playing in Melbourne’s first AFL game in Hobart since 1952, when the Demons played Fitzroy at nearby North Hobart Oval, losing by 20 points.

“I was in the gym and Misso (fitness boss Dave Misson) came down and got me and said “Roosy (coach Paul Roos) wants to see you” and I found out then … when Roosy told me,” Wagner told Melbourne TV.

“I couldn’t wipe the smile off my face. I wasn’t really expecting it this week, but I played a few NAB (Challenge) games and last week and had a crack at it, and it paid off,” he said.

Ironically, Josh Wagner, who has never even been to Hobart, will play for Melbourne in the Tasmanian capital against North Melbourne, the club which drafted younger brother Corey last November.

He will be the 156th Queenslander to play in the AFL, following the 2015 debut quartet of Harris Andrews, Liam Dawson, Tom Fields and Lachie Weller.

In other Queensland news from Round 3 selection last night:-

Josh Wagner has jumped the football queue to be the first Queenslander to debut in the AFL this year after being the 5th of a whopping 11 Queenslanders taken in the national and rookie drafts last November.

Wagner’s pending selection is a victory for the mature age draftee and the culmination of a bumpy ride to the elite level.

A top-level junior, he had an outstanding year as a 16-year-old in the Queensland U18 side in 2011 after making his senior debut at Aspley at the same age.

Twelve months out he was on track to feature in the 2012 NAB AFL Draft, which ultimately saw Clay Cameron join Gold Coast as a zone priority selection in the national draft, and Adam Oxley (Collingwood), Andrew Boston (Gold Coast) and Jordon Bourke (Brisbane) get their first-time opportunity via the rookie draft.

But despite four more senior games at Aspley in 2012 there was no Wagner in the Draft. He’d suffered pre-season groin problems leading into the season and without a proper preparation didn’t play at the same level. He was overlooked.

The former apprentice carpenter subsequently admitted his attitude might not have been quite right, but he wasn’t about to give up on his football dream. He went back to the NEAFL to prove himself. And prove himself he did.

Last year, too, he put himself right back into the draft picture when he won selection in the NEAFL Representative side that played against Tasmania, and in the NEAFL Team of the Year, impressing good judges across the country with his creative ball use across half back.

Wagner was taken at No.6 in the rookie draft by Melbourne, where list manager Jason Taylor, formerly at Collingwood, hadn’t forgotten his huge promise.

Said Taylor at the time: “His last couple of years have been pretty solid … he’s a left-footer and a rebounding defender, who can play on the wing and spend a bit of time in the midfield. We think he’s got the right attitude.”

Wagner played in the senior Melbourne side in each of the three NAB Challenge games, looking comfortable at the level without enjoying a lot of ground time, and more recently has played at Casey in the VFL practice match series.

But he got his chance after Melbourne’s disappointing loss to Essendon in Round 2 of the AFL last weekend.

Josh and Corey Wagner are members of one of Queensland’s great football families.

It is headed by the boys’ paternal grandfather, Gary Wagner, a Queensland Football Hall of Famer who played 15 years at Sandgate, was a premiership player in 1971-73-74, and a regular member of the State side.

Josh’s maternal grandfather, Col ‘Skinny’ Robinson was also a Sandgate player, having first pulled on the green and red jumper of the club in 1948, five years after it was formed. He was a member of the club’s first premiership side.

Also, their father Scott, who will travel south with wife Lisa this weekend, played in a Queensland U17 side captained by Collingwood premiership star Gavin Crosisca and skippered the Brisbane Bears first development squad before a standout 200-game AFLQ career with Sandgate.