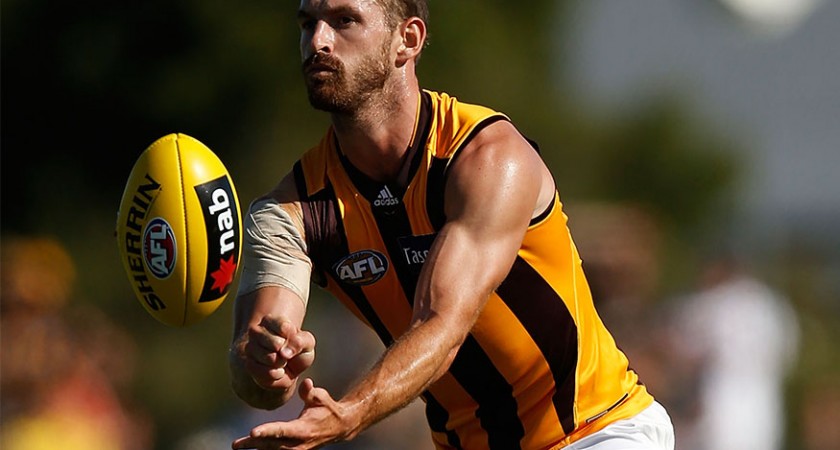 Brendan Whitecross, one of the AFL’s saddest stories in recent years, is one step away from a fairytale return to the game at the top level this weekend.

Bracketed among seven players chasing four spots on the interchange bench, the 26-year-old Queenslander looms as a possible replacement for injured Hawk skipper Luke Hodge after a strong pre-season and two good showings in the NAB Cup.

He is chasing an 89th senior game at Hawthorn that for a time last year wasn’t going to happen.

Whitecross, an unrestricted free agent at the end of the 2015 season, was linked to a move to the Brisbane Lions and the GWS Giants during the trade period before deciding instead to stay with the club that drafted him in 2007.

If he survives the selection cut tonight he will play just his fifth AFL game since his second serious knee injury in the 2013 preliminary final.

Whitecross, a Kedron junior who played senior football at Zillmere before being drafted, could have been a triple premiership player at Hawthorn had things worked out differently.

He played 72 games in 2009-10-11-12 after making his debut as a 19-year-old and had established himself as a senior regular and an emerging club leader before disaster struck in the 2012 preliminary final.

He blew out his knee in freakishly simple circumstances and missed the 2012 grand final which Hawthorn lost to Sydney.

Returning from injury in Round 14 2013 he played 12 games in a row when disaster struck in the preliminary final again. Another knee blow-out in similarly innocent fashion saw him miss the Hawks’ grand final win over Fremantle.

He sat out the entire 2014 season as the Hawks completed back-to-back flags, and after playing Rounds 3-4-5-6 in the seniors last season he lost his place in the top side.

He played the rest of the year in the VFL, winning a flag with Box Hill as Hawthorn completed their memorable premiership hat-trick, before setting himself for a make-or-break 2016 season.

Whitecross’ possible return was the top-billing Queensland news to come out of selection for AFL Round 2 last night.

Collingwood’s Adam Oxley was the other big winner, earning promotion for tonight’s crunch game with Richmond at the MCG after being the travelling emergency for the Pies’ heavy loss to the Sydney Swans in Sydney in Round 1.

Oxley, a 23-year-old ex-rookie from Redland, will be out to recapture his outstanding form of early last year, when he played 16 games in a row and impressed enormously with his work across half back.

He won the Collingwood award for the best off-season trainer, and was rewarded last month with a two-year contract extension that locks him into the club until the end of 2018.

Fellow Queenslanders Daniel Merrett and Dayne Zorko will also return to senior ranks this weekend after missing the Brisbane Lions’ season opener against West Coast due to illness and suspension respectively.

They will help bolster the Lions for Saturday’s twilight Gabba clash with North Melbourne.

But squeezed out of the Lions side after the heavy Round 1 loss was forward Jono Freeman.

So, after 18 Queenslanders played in Round 1, there will be at least 20 in action in Round 2. And it’ll be 21 if Whitecross is included in the final Hawthorn side.

Freeman and fellow Queensland youngster Liam Dawson were named in the Lions emergencies.