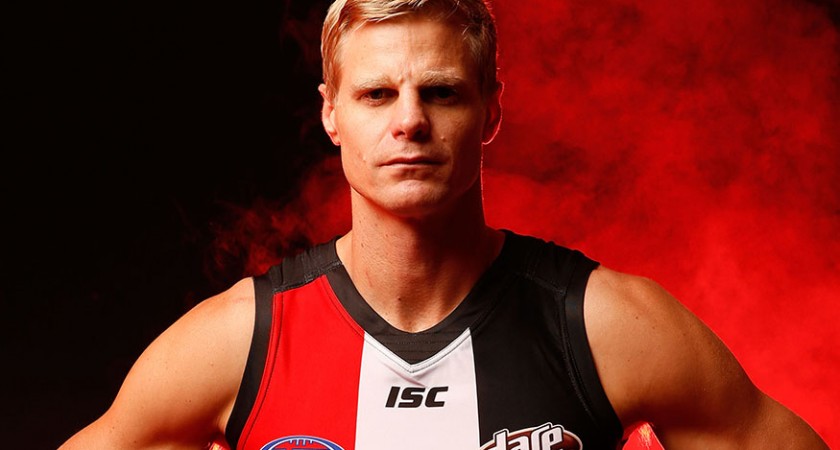 If you ask St.Kilda captain Nick Riewoldt to reflect on his extraordinary AFL career he’ll tell you ‘no regrets’.

It’s what champion players and champion people do.

And as he prepares for his 300th game against the Western Bulldogs at Etihad Stadium on Saturday night, the former Broadbeach and Southport junior has more than enough to be proud of. Statistical highlights include:-

Regarded as much for his sportsmanship and spirit of fair play as he is for his fierce competitiveness and extraordinary athleticism, he is an AFL Hall of Famer in the making

But there’s still one big thing missing from the Riewoldt CV – an AFL premiership.

As much as he is one who lives in the now and doesn’t waste time on peripheral issues, there are plenty who will wonder “what if?”

In particular, they will wonder how things might have turned out if the AFL hadn’t changed the Brisbane Lions recruiting boundaries in the year leading up to Riewoldt’s entry to the AFL. And instead of going to St.Kilda with the No.1 pick in the 2000 AFL Draft he was a priority zone selection to the Lions.

It could easily have happened.

Early in the 2000 season the AFL had reviewed the recruiting concessions offered to the Brisbane Lions which in previous years had seen them claim Steven Lawrence (1993), Jason Akermanis (1994), Danny Dickfos, Brett Voss and Derek Wirth (1995).

Without fully realising the impact of their decision, the League initially imposed a 50km recruiting radius from Brisbane, which would exclude Gold Coast and Sunshine Coast players.

Andrew Ireland, Lions’ CEO at the time, asked that the rule be changed, arguing that if there was a perception that Queenslanders had to leave home to follow their AFL aspirations it was a dis-incentive to play the game in the Sunshine State. “It is a question of doing the right thing for AFL football in Queensland,” he said.

According to football folklore, when the error was pointed out to the AFL they had intended to rectify the problem because it made simple sense to include all areas that formed part of the Queensland State Football League competition.

Then, as the season wore on and after Riewoldt starred at the Australian U18 Championships, the Queensland recruiting concession became more an issue of personality rather than principle.

It didn’t matter that the concession was intended to provide a mechanism for Queenslanders to follow their AFL dream without leaving home. Rival clubs were intent on making sure the Lions didn’t get first crack at potentially the best Queenslander since Michael Voss, as Riewoldt was rated at the time.

There was no doubting Riewoldt’s strong Queensland connection despite the fact he was born in Tasmania.

He was a Queenslander from the age of nine and attended Robina State Primary School from Grade 5, later becoming the school vice-captain.

Riewoldt played junior and early senior football at Broadbeach before switching to Southport, where he played a big part in the club’s historic fourth consecutive QAFL premiership in 2000.

Despite the best endeavours of the Lions powerbrokers there it stayed.

To the southerners it didn’t matter that at the time Brisbane had the lowest percentage of homegrown players in the AFL, with just 10 ‘locals’ among 38 listed players. Or that six of these – Gold Coasters Marcus Ashcroft, Matthew Kennedy, Clark Keating, Matthew Kennedy and Steven Lawrence and Sunshine Coaster Nathan Clarke – would not have been tied to the Lions under the revised structure.

The Lions did get 129-game ruckman and 2003 premiership player Jamie Charman from the 50km recruiting net via the 2000 Draft, but still the mind boggles about what might have been.

Where would Lions 2001-02-03 premiership coach Leigh Matthews have played a young Riewoldt in a side that already boasts three gun key forwards in Alastair Lynch, Jonathan Brown and Daniel Bradshaw?

Perhaps the end-of-career option of playing Riewoldt up around the wing, which 2016 coach Alan Richardson is exploring, might have been fast-tracked 15 years.

Still, there’s another “what if?” which probably weighs much more heavily on Riewoldt’s shoulders …. What if, in the dying seconds of the 2010 AFL grand final against Collingwood, the ball had bounced a little differently.

Riewoldt will remember vividly the moment in the 30th minute of the final term when Lenny Hayes pumped the ball deep into the St.Kilda forward line.

If the ball had just bounced straight up Stephen Milne would have had time and space to gather and perhaps kick the winning goal.

Instead it bounced virtually at right angles and went through for a behind which levelled the scores and ultimately set up a replay the following week in which Collingwood beat St.Kilda by 56 points.

This fickle bounce denied Riewoldt the AFL premiership he has cherished for so long.

All this is good material for football tragics who love discussing such things, but regardless Riewoldt will go down as one of the all-time greats, and an icon of not just Queensland football but Queensland sport.

His six St.Kilda B&F’s is one more than the Voss five at Brisbane and two more than Dunstall’s four at Hawthorn. And his four All-Australian selections is behind only Voss (5) and level with Dunstall (4) and Akermanis (4).

Riewoldt’s 300th game will come one week after he grabbed another slice of history in the 2016 AFL season-opener last weekend, captaining St.Kilda for the 200th time.

And but for ex-St.Kilda coach Grant Thomas he could very easily be at the top of that list.  Another what if!

Riewoldt, who has played his entire career in jumper No.12, made his AFL debut as an 18-year-old in what turned out to be Malcolm Blight’s last game as St.Kilda coach in Round 15 2001 .

After the Saints were beaten by the Adelaide Crows by 97 points at Etihad to sit 14th on the 16-team ladder with a 3-12 win/loss record Blight was unceremoniously dumped and replaced by Thomas.

Thomas originally appointed Riewoldt captain of the club in 2005 under a leadership rotation policy. He was the club’s fourth captain in four years, following Robert Harvey (2001-02), Aaron Hamill (2003) and Lenny Hayes (2004).

But despite Riewoldt doing an excellent job as skipper, taking his side to the preliminary final, Thomas continued his rotation policy in 2006 and appointed Luke Ball to lead the side.

It wasn’t until 2007, when Ross Lyon relaced Thomas as coach, that Riewoldt took back the captaincy. He shared it with Ball and Hayes in ’07 before doing the job solo from 2008 under Lyon, Scott Waters and Alan Richardson.

Riewoldt will be the second member of the Class of 2000 to post an AFL triple century, following Kane Cornes, who was chosen by Port Adelaide with selection #20. He played an even 300 games before retiring partway through last season.

Interestingly, while there were six 200-gamers in the first round of Riewoldt’s 2000 National Draft, seven first-round picks in the same draft failed to play more than 50 games. First round selections that year were:-

As was engineered by the club ahead of the release of this year’s AFL fixture, he’ll reach this monster milestone in front of the Saints faithful at Etihad Stadium.

His highest single-game possession count of 31 came in a 20-point win over Melbourne at Etihad in Round 9 2011, when Leigh Montagna had 38 and Brendon Goddard 37. He didn’t even figure in the medal voting.

As much as it’s impossible to find words to adequately describe the career of the 193cm blonde, one that always comes to mind is consistency.

Six times he’s polled double-figure votes in the Brownlow Medal, with five top 20 finishes and two top 10 finishes, including a best of equal 7th with 17 votes in 2004.

It’s been a remarkable career, but still we wonder what if?