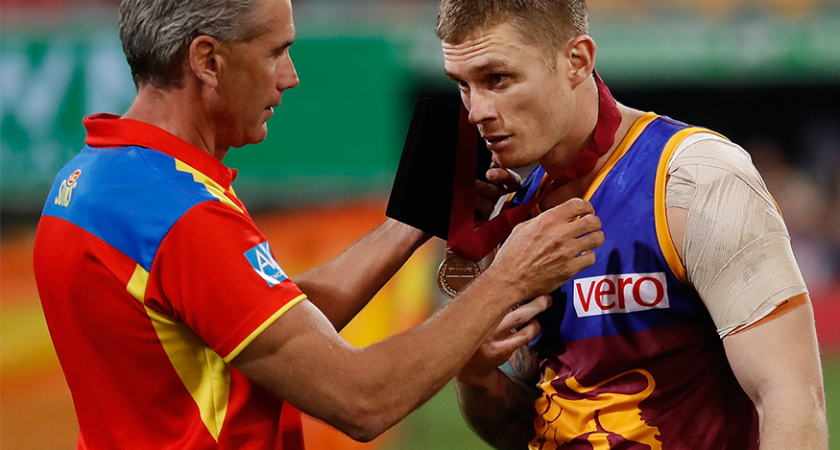 It’s a bit like a triple century in Test cricket, four rounds of 66 in a major golf tournament, or a perfect break in billiards.

So special is the 30/4 double in football that in the history of Queenslanders in the AFL only six players have ever achieved it.

And now, after the weekend, one player has done it twice. Beams.

The Brisbane Lions captain, growing in stature almost weekly in his first season at the helm, had 32 possessions and kicked four goals to spearhead his side to an emphatic QClash win over the Gold Coast Suns at the Gabba on Saturday evening.

It was a performance of the highest order as the Lions withstood the predictable early surge from the Suns after coach Rodney Eade had been sacked mid-week, and went away to win comfortably.

For the second time in as many games between the two Queensland sides this season Beams was judged best afield to win the Marcus Ashcroft Medal.

He finished with 32 possessions (10 contested), seven marks, four clearances, four tackles and a personal-best four goal assists to be the standout Queensland performer in Round 21 of the Toyota AFL premiership.

Beams’ 30/4 double in his 145th AFL game followed his 34 possessions and four goals in his 74th game for Collingwood against Hawthorn in 2012.

He was the third Queenslander in the 30/4 Club after Voss, who had 32 and four in his 72nd game against West Coast in his Brownlow Medal year of 1996, and Akermanis had 35 and four in his 205th game for Brisbane against Adelaide at the Gabba in 2004.

Armitage had 31 and four for St.Kilda against GWS in Canberra in his 74th game in 2013, and teammate Riewoldt had 30 and four against Fremantle at Docklands in his 276th game in 2014.

Zorko completed the list only five weeks ago when he had 36 and four against Geelong at the Gabba in his 116th game.

Only two 30/4 doubles have come in a losing side – Beams the first time and Zorko.

There is one performance which, at least statistically, exceeds even these six.

The mercurial Akermanis went one step further up the ladder of excellence when he had 30 possessions and kicked five goals for Brisbane against Geelong at the Gabba in 2005.

But for multiple performances at this elite level it’s all Beams.

Of 10 30/3 performances among Queenslanders he has five. The others belong to Voss, Scott McIvor, Zorko, Akermanis and Riewoldt.

Beams’ match-winning performance on Saturday earned him 138 Champion Data ranking points and saw him top the Queensland tally board for Round 21.

It was his 10th Champion Data “century” of the season on a day which would have meant a lot to Beams and younger brother Claye, who had a very respectable 15 possessions and a goal in his return to the Lions side.

It was the 15th time the Beams brothers have played in the same side, and only the second time they’ve shared a win.

The other standout Queenslander in Round 21 was Sydney forward/ruckman Kurt Tippett.

In his second comeback game from injury Tippett was an important member of the Swans side that obliterated Fremantle at the SCG on Saturday, collecting 13 possessions (seven contested), seven marks (three contested), a game-high eight tackles, 11 hit-outs and two goals to earn 109 ranking points.

Certainly, AFL website writer Adam Curley was impressed. He wrote: “A lingering ankle injury and some patchy form has limited the Sydney ruckman to just seven games for the season and saw him spelled to the NEAFL, but the 30-year-old has shown signs in the past fortnight that he could be more than handy come finals time.

“Tippett was solid in his senior return against Geelong, but was even more effective against Fremantle on Saturday. Always a threat in the air at his best, the big man clunked a season-high seven marks, four of those inside 50 – three of them contested – and booted two goals, but was also outstanding defensively for the Swans. Tippett laid eight tackles, the most of any player on the ground, making him extremely valuable as a ruck-forward option for coach John Longmire.

“He’s still got a way to go, but it was an encouraging performance. He was the third-best ruck option behind Sam Naismith and Callum Sinclair two weeks ago, but an injury for Naismith opened the door, and right now Tippett is at the head of the queue.”

Dixon, described by Fox Footy commentator David King as Port’s most important players going into the finals, had 17 disposals, six marks, three tackles, one goal and one goal assist in his seventh Champion Data ‘century’ of the season.

Next best in the rankings points was North Melbourne ruckman Braydon Preuss, who looked every bit the Kangaroos’ No.1 big man in their loss to Hawthorn in Launceston.

Significantly, Todd Goldstein, the long-standing North ruck spearhead, played 84% of the game for four disposals, no marks, 22 hit-outs, one tackle, no goals and 32 ranking points.

Geelong ruckman Zac Smith also continued his good form when he was among the Cats’ best in their critical win over Richmond at Geelong on Saturday. He had 13 disposals (six contested), four clearances, a game-high 33 hit-outs and two tackles for 80 ranking points.

Zorko earned 78 ranking points for 22 disposals, four clearances, four tackles and a goal for Brisbane against Gold Coast, while impressive teammate Jacob Allison had 19 disposals as he celebrated his first AFL win.

Harris Andrews had 13 disposals, eight marks and 11 one-percenters in the same game, and Eric Hipwood nine disposals, one goal and two goal assists.

Sam Gilbert returned to the St.Kilda side after a three-week injury lay-off that puts his 200th game out of reach this season and had 21 disposals (11 contested) and four tackles. It was his 197th game.

Lachie Weller had 14 disposals for Fremantle, Josh Thomas 21 disposals (10 contested) for Collingwood, and Josh Wagner 14 disposals and a goal assist in Melbourne’s season-defining win over St.Kilda.

In the VFL, Shaun Hampson got through his first game of the season for Richmond, playing limited game time for four disposals and 28 hit-outs against Geelong, Wylie Buzza had 13 disposals, 13 hit-outs and kicked 2-4 for the Cats.

Lachy Keeffe put his hand up for senior selection at Collingwood with 17 disposals, nine marks and two goals for Collingwood against North Ballarat. Josh Smith had 36 disposals.

In the SANFL, Paul Hunter continued his excellent finish to the season with 22 disposals and 22 hit-outs for the Adelaide Crows against North Adelaide.

And in the NEAFL, Aliir Aliir was best afield for the Sydney Swans in their 127-point win over Redland. Playing in the ruck, he had 27 disposals, 25 hit-outs and kicked two goals.

Ben Keays was best for the Lions with 32 disposals in their six-point loss to the Suns at the Gabba. Matt Hammelmann (three goals) and Matt Eagles also were named in the best.