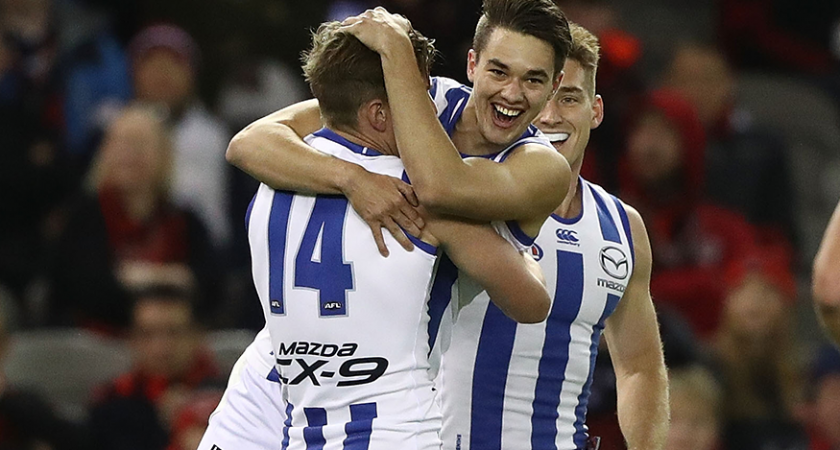 One Queenslander began his AFL career at short notice over the weekend as another has been pitch-forked into what shapes as a hot and prolonged debate about when his career should end.

And six hours later at the SCG Gold Coaster Nick Riewoldt played his 333rd game for St.Kilda against the Sydney Swans. And potentially the fifth last of his magnificent career.

Riewoldt’s future will be a hot topic in the coming weeks along with that of long-time Saints teammate and fellow veteran Leigh Montagna.

Set to turn 35 in October, Riewoldt has declared he wants to play an 18th season in 2018, but there is a growing push among various media outlets and commentators suggesting his time is up.

AFL website writer Adam Curley wrote today: “Nick Riewoldt and Leigh Montagna are two of St Kilda’s modern day greats, and while the out of contract veterans want to play on next year, the club needs to call time.

“Riewoldt is a walk up start Hall of Famer but it’s hard to watch perhaps the best athlete of his time hobbling around the footy field, his body unable to get on the same page as his mind. On several occasions against the Swans, Riewoldt struggled to his feet after going to ground, and was largely outpointed by his tyro opponent Lewis Melican.

“Montagna was one of his team’s best until his hamstring went on him in the third term, and sure, both might have some decent footy to play, but there’s nothing left to gain from playing on.

“Riewoldt will be rested next week, but if his career finishes in round 23 – with St Kilda looking unlikely to play finals – it gives the fans four games in Melbourne to turn out en masse for a fitting farewell tour. If Montagna does get back, the pair of club favourites could go out with a massive game against Richmond and Nick’s cousin Jack at a packed MCG.”

Riewoldt, second on the all-time St.Kilda games list behind Robert Harvey, had 10 disposals and kicked a goal in St.Kilda’s heavy loss to Sydney, joining Kevin Murray and David Cloke in equal 20th spot on the all-time AFL games list.

His 333rd game took him one game past Leigh Matthews, Justin Madden and Corey Enright.

Three games behind Shaun Burgoyne, who looks destined to play on at Hawthorn, Riewoldt is within striking distance of John Rantall (336 games) on the all-time list.

At the other end of the career scale, debutant Williams grabbed a special slice of football history when he became the sixth Queenslander to kick a goal with his first kick in AFL football.

It was all part of an unforgettable day for the 19-year-old speedster, who was the fourth Queenslander to debut in the AFL this year after Gold Coast’s Jack Bowes, North Melbourne’s Braydon Preuss and Geelong’s Wylie Buzza,

Claimed by North Melbourne with selection #36 in the 2016 AFL National Draft after coming through the Gold Coast Suns Academy, he was originally selected to play for Werribee against Box Hill in the VFL on Sunday.

About 11am on Saturday he was told he might be chance to make his AFL debut because key defender Robbie Tarrant was under a cloud, but it wasn’t until 40 minutes before the first bounce that he he was a confirmed starter after North medical staff ruled Tarrant out with back spams during the warm-up.

Sadly, by then it was much too late to get his family to the game to the ground, and so late was it that it couldn’t even call them. That happy task was left to a club official.

But as Williams said, the flip side was that he didn’t have time to get nervous either.

“It was probably a good way to have it, I didn’t have to think about it too much,” Williams told the Sunday Herald Sun.

“Some guys get told early in the week and have lots of sleepless nights, but I just got straight into it.

“They told me to be on standby, because we did know he (Tarrant) was a bit sore.

“I quickly got changed, got my ankles taped, had a bit of treatment, got the boots on and did a bit of a warm up out there.

“The first quarter was pretty intense, I was buggered after the first five minutes.

“But then I soon settled in and found my way.”

The game wasn’t even four minutes old when Williams found himself on the end of a errant clearing kick from Essendon defender Travis Collyer and promptly banged it back over the goal umpire’s head.

“It just came to me, I was in an all-right position to intercept,” he said.

“To be honest, it all went so quickly that all I tried to do was think back to training and my set routine.

“You’ve got to earn the respect of the boys and I hope I’ve done that today.”

Williams played 78% of game time and ended the day with seven kicks, seven handballs, six marks, three tackles and two bounces — a more than respectable debut in front of a crowd of 40,359 in the Roos’ 27-point loss.

Not for the first time this season the Brisbane Lions’ super-Daynes were the Queensland stars in Round 18 of the Toyota AFL premiership.

Captain Beams, unable to do any contact work at training in the past fortnight due to a shoulder problem, adapted his game nicely and played a key role in his team’s win over Carlton with 30 possessions, 10 marks, three clearances, three goals and a goal assist.

Beams earned 131 Champion Data ranking points as he led his side to a superb victory.

Zorko set the game alight for the Lions with a brilliant first half, and finished with 26 disposals (12 contested), five clearances, five tackles, three goals and two goal assists for 142 Champion Data ranking points.

In doing so Zorko became the 12th Queenslander to top 2500 AFL possessions.

Harris Andrews was another star for the Lions, earned a season-high 96 ranking points for 18 disposals, 10 marks and eight one-percenters.

In other games, Josh Thomas continued his impressive comeback with Collingwood, playing his role in a brilliant come-from-behind win over West Coast at Etihad Stadium with 12 disposals, three clearances and a goal assist.

Brendan Whitecross, too, enjoyed a win in his return to the Hawthorn side, picking up 18 possessions and seven marks in the Hawks’ win over Fremantle in Perth.

Lachie Weller had 22 disposals for the Dockers to be among the home team’s best, while Lee Spurr picked up 11 disposals.

Charlie Dixon had 13 disposals, seven marks and a goal in his 100th game against Melbourne at the MCG, and Zac Smith had 14 disposals, 15 hit-outs and four clearances for Geelong against Adelaide in Adelaide.

Cairns’ product Jarrod Harbrow didn’t get the win he was hoping for when the Gold Coast Suns were beaten by the Western Bulldogs at Cazaly’s Stadium.

Harbrow had 16 disposals for the Suns, while Alex Sexton had 11 disposals and Jack Bowes eight disposals. Rory Thompson was a late withdrawal.

In the VFL, St.Kilda’s David Armitage, not seen in the senior side since Round 4 due to injury, returned with Sandringham against Geelong. He had 22 disposals on limited game time and is set for another week at the lower level.

In the same game Tom Hickey pushed for a senior recall when named third best for Sandringham after collecting 28 disposals, 35 hit-outs and a goal.

Josh Smith did likewise when he was among Collingwood’s best against Richmond with 34 disposals. Jesse White had 13 disposals and two goals, and Lachy Keeffe 14 disposals and one goal.

Josh Wagner had 24 disposals and nine tackles to be among Casey’s best against Essendon, while Jake Spencer had 10 disposals and 22 hit-outs in his ruck battle with ex-Lion Matthew Leuenberger.

In the NEAFL, Sydney’s Kurt Tippett returned from injury in style with five goals, 21 disposals, 24 hit-outs and 10 marks against NT Thunder. Aliir Aliir had 22 disposals, 12 hit-outs and a goal.

Jesse Joyce was best for the Suns against Southport, pushing his case for a senior recall with 23 disposals, Max Spencer (15 disposals) and Brad Scheer (23 disposals) were also in the best.