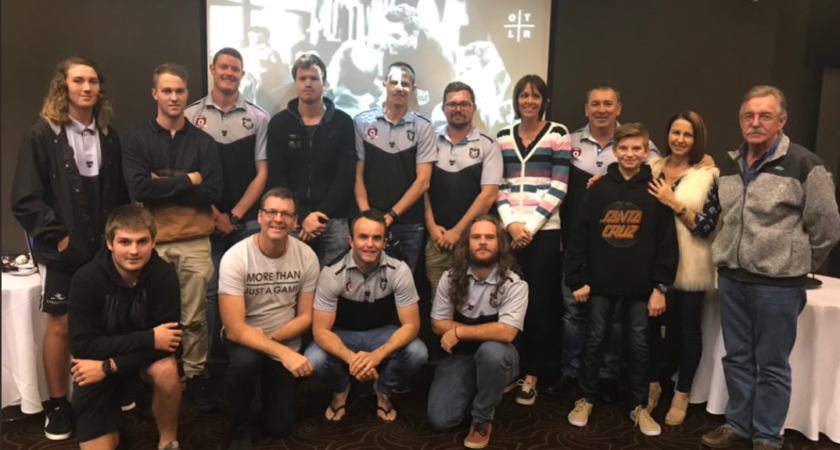 AFL Mackay has this week launched a ground-breaking welfare and education program for their the local football community in conjunction with key stakeholders in the region.

The roll out of Outside the Locker Room (OTLR), a program for sports players focusing on education and support in relation to their daily challenges, began on Tuesday 19th June, with the program launch at the Icon Cancer Centre.

This week, two of the clubs competing in the AFL Mackay competition introduced the program to their respective teams, with a further four clubs to follow suit in the coming weeks.

The Mackay Magpies and the North Mackay Saints have already introduced the program to players and club members, with another four clubs to follow shortly.

The OTLR program provides participants with strategies on how to combat social and mental health issues in a productive way.

Highlighting the numerous resources and organisations accessible to the region’s football community, the program aims at educating and providing assistance to young people.

AFL Mackay Competition and Club Development Manager, Paul Scullie, said the importance of rolling out such a program is immense.

“We want to be able to provide a program that’s accessible so that anyone can take advantage of,” Scullie told aflq.com.au.

“It provides support based around mental health, drug issues and alcohol problems and it delves into gambling and club leadership.

“It’s been a big passion of mine to be able to deliver something like this to the clubs and to our participants in the region.”

Such a great week here in #Mackay as we roll out the welfare & education program, Outside the Locker Room for our @AFLQMackay clubs.
The support & education this program will provide to our clubs members & families moving forward is very exciting. #OTLR #FootyInParadise pic.twitter.com/y0D2P1t0mE

Scullie said the clubs participating in the welfare program work in conjunction with OLTR representatives to ensure clubs and their members have the necessary support tools.

“The clubs are the ones that drive this program and provide this support to their club members. People from our community want to be a part of a club that looks after their members, so we believe this program delivers that” he said.

“We’re empowering our players to have the conversation with their mates and want each of our members to control this conversation. It’s important to get the conversation started and having our clubs promote this to their members.”

Education sessions will be held within each of the clubs, along with providing several other support services through the program.

A free downloadable app service is available too, and allows for club members a one-touch route to access Lifeline Australia or one of over 5000 counsellors in Australia.

The OTLR program has been made available to AFL Mackay clubs through the support of organisations such as North Queensland Bulk Ports and the EPIC Good Foundation (Icon Cancer Centre), in partnership with AFL Queensland.