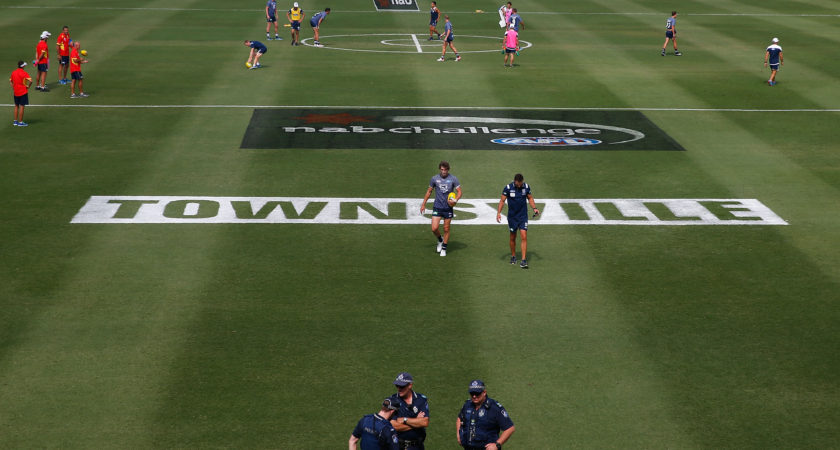 Townsville will host its first ever Toyota AFL Premiership Season match in 2019 when the Gold Coast SUNS host St Kilda at Riverway Stadium on Saturday, June 15.

Tourism Industry Development Minister Kate Jones said the deal would see the Gold Coast SUNS play for premiership points for the ninth straight season in north Queensland and for the first time in Townsville.

“This is great news for footy fans around the country. Not only will locals see some first-class AFL in their own backyard, visitors will get a chance to experience all that North Queensland has to offer.

“North Queensland is a great place for a winter holiday escape. This is just another great reason to travel to Townsville during the footy season.”

Gold Coast SUNS Acting CEO Andrew Thomas said the club was delighted to be deepening its connection with North Queensland.

“We know north Queensland fans are passionate about AFL, and with the support of both the AFL and Tourism and Events Queensland, we are thrilled they will see the team play an AFL match for the very first time in Townsville,” Mr Thomas said.

“As a club we have established significant support in north Queensland. For the past eight seasons we have played an annual match in Cairns and we are thrilled to now be sharing this match with Townsville and its many AFL fans.

“North Queensland is a significant region for our club and is our home away from home and we enjoy playing our role in developing Australian Football throughout the region, which is also a key recruitment catchment for the Gold Coast SUNS Talent Academy.

“2019 is an exciting year for Gold Coast SUNS fans based in North Queensland when the team plays a JLT Community Series pre-season match in Mackay in early March and a premiership season match in June in Townsville.

“In the past, through community camps, pre-season games, AFL premiership fixtures and the Mackay Reginal Council’s recently announced partnership with our Women’s program, the Gold Coast SUNS has and will continue to support the growth of AFL in north Queensland.”

Townsville Mayor Jenny Hill said she was incredibly excited the SUNS will play a Toyota AFL Premiership Season match in the city.

“We are the events and sporting capital of Northern Australia and we have arguably the best ground in regional Australia with Riverway Stadium.

“We will showcase the amazing AFL facilities we have to a national audience and attract footy fans from across the country to our city.

“Fans travel from out of town will stay in our hotels, eat in our local restaurants – which is great for creating local jobs for our city.

“I’m sure all the local AFL diehards – including myself – are looking forward to the game.”

The Townsville match will be broadcast national on Fox Footy and on 7Mate throughout Queensland.

Details of how to purchase tickets to these matches will be promoted in early 2019 on goldcoastfc.com.au