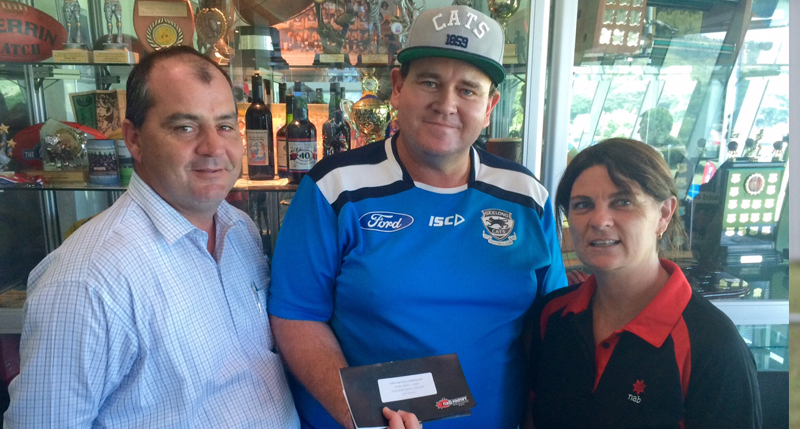 The passionate school teacher; 25 years and counting, teaches at Millchester State School in Charters Towers and has been involved with the local club, Charters Towers Demons, for the past five years.

The unsuspecting Gerogee, however, had been chosen by AFLQ Townsville; for all his hard work, to toss the coin at the beginning of the NAB Challenge match between the Gold Coast SUNS and Geelong Cats.

The surprise announcement; his reaction has been described as ‘shock, excitement and disbelief all in one’ was a well-deserved reward for someone who has put his heart and soul into local footy.

Georgee, a Cat supporter since 1978 when he was 8, was blown away by his experience and thankful for the recognition of the work he does.

“It was a truly magical moment to be able to toss the coin in Townsville,” he said.

“I never expected to be given such an honour and I will forever be grateful to NAB, Woolworths, AFLQ and the AFL School Ambassador Program for this opportunity.

“This game has given me so much joy over the years and to be able to be out there on the field was absolutely amazing.

“Everyone made me feel so good about what I do and everyone including the players and umpires were so lovely.”

Each year Georgee, in his role as an AFL Ambassador, gets to see the growth and love of the game flourish in young footy players.

“The most rewarding part is fostering in the students a love for our great game and in many cases seeing them blossom into great players,” he said.

“Every year at school, district and regional level I am amazed at how well students pick up the game.

“Last year was a case in point where one of my Year 7 students went on to be a key ruckman in our North Queensland team after having little or no experience; he was almost 6 foot though.”

The upcoming season still offers plenty of anticipation for Georgee, as a new crop of players comes under his guidance.

“I am really looking forward to seeing a new group of students take part in regional and then state trials,” he said.

“The energy and passion of seeing 15 young children take part in a team environment, supported by their parents, is a great thing.”