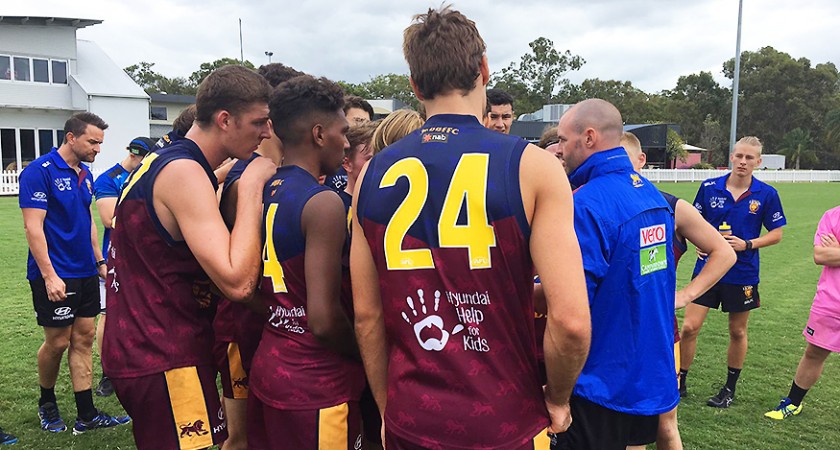 Jack Payne was a mainstay throughout the series for the Lions, holding down a key post down back and rarely loosing a contest. Not only was his defensive work solid, but the 195cm discuss thrower from Noosa was creative coming out of defense and set up a lot of the Lions’ play. Payne’s consistency earned him the Lions’ series MVP award.

As perhaps the biggest name in the Academy Series and a prospect many think will go early in the AFL draft, key forward Connor Ballenden had an interesting series. First up against the SUNS he found it difficult in slippery conditions and couldn’t get going, but he started to light up towards the end of the series after a move into the ruck. In his last two games Ballenden showed exactly why he’s rated so highly, dominating in the air and working hard around the ground.

Jack Tomkinson proved a valuable contributor in the ruck for the Lions, impressing with his work ethic and ability to go forward at stages. Tomkinson had an injury interrupted pre-season with a broken collarbone, but put in a solid block of preparation after Christmas to get himself ready for the series.

Under ager Caleb Franks upped his fitness level over the pre-season and it showed on the field. Franks won his share of contested ball over the course of the series and his attack on the ball against older players would have impressed recruiters.

Series in a second

The Lions Academy got off to a great start against the SUNS in their first game of the series, winning with a huge effort in the last quarter to just get over the line. Unfortunately for the Lions, there was only one more win to be had for the rest of the series, against the Northern Territory in round three. Getting better as the series went on, the Lions lost their last game against the GWS Academy by a slender four-point margin in a strong, four-quarter performance. Overall the Lions showed great potential, but a lack of consistency cost them on the scoreboard at times.

“We showed glimpses of what the boys are capable of, but couldn’t sustain it for long periods in games,” said Lions Academy Manager Luke Curran.

“Our game against the Giants in the final round was probably the first time the boys put in a four-quarter effort together and with a bit better composure and skill execution going forward we might have snuck away with a win.”

It’s no coincidence that the Lions’ form improved toward the end of the series, alongside Connor Ballenden’s heightened contribution to the team.

“He (Ballenden) leads by his actions and certainly in a lot of the games, against Tassie and the Swans and also the Giants, when he lifted the boys around him grow a bit taller and lift with their output as well,” said Curran.

“He certainly was an influential player from our point of view.”

Next stop is training for the Under 18 NAB AFL National Championships for Connor Ballenden, Jack Payne, Jack Clayton and Ben Sloan.

However, as both the SUNS and Brisbane Lions Academies have stressed it’s not the end of the year for players that aren’t selected. Many will get an opportunity to impress at NEAFL level, while others will strut their stuff in the QAFL. There is also the opportunity to play in under 17 state representative games, for the squad’s bottom age players.

The National Championships get underway on June 10 and the Allies have their first game at Blacktown International Sportspark on the 11th against Vic Country.