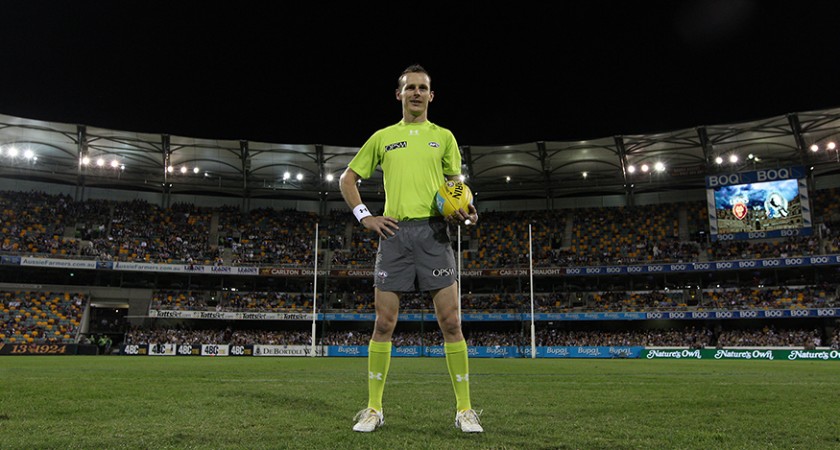 There is an athlete gliding across the Gabba turf this season, who once rubbed shoulders with Tony ‘Plugger’ Lockett, was there, when one of the most dominant teams in recent memory, the Michael Voss captained Brisbane Lions, terrorised the competition and held up the cup three times. Matthew Lloyd was kicking bags for the Dons as he watched from the boundary.

His name is Aaron Deckys, an AFL boundary umpire from the Sunshine Coast, who will reach the 300 game milestone this Saturday when the Lions clash with the Power. The former promising high school sprinter continues to hit PBs at the age of 40 and passes his required 5k time trials with ease, coming in under the minimum 18-minute benchmark. Deckys has always been a runner.

As a teenager who enjoyed sprinting, cross country running and athletics, flying up and down the white line was no issue and the crisp 22 dollars that came in an envelope after the game was more than his friends, working at Maccas, would earn over the whole weekend.

“I remember vividly going out there and thinking, whoah, like these guys are adults and I’m here running around trying to tell them what they need to do,” said Deckys.

The step up to AFL level was a dramatic change and since then, Aaron’s had a nose-bleed seat to the evolution of the game. Nowadays there are two boundary umpires on each side, just to keep up with the sheer pace of the modern game.

“We would only have one person on each side and there would be someone who was on the bench and we would do a little bit of an interchange system.”

“Having to cover that whole boundary by yourself, it was just another world compared to state league football.

“You’re running for your life.” 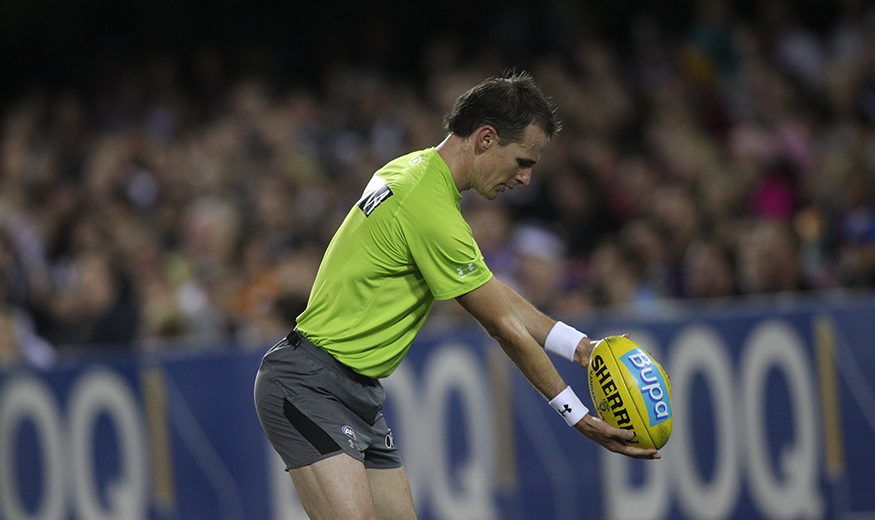 during the AFL Round 07 match between the Brisbane Lions and the Collingwood Magpies at the Gabba, Brisbane. (Photo: Bradley Kanaris/AFL Media)

It’s a testament to the man’s mental ability, to continue to meet the rigorous standards required to be an AFL boundary umpire over nearly two decades. Deckys runs 17 kilometres in a taxing game and clocks about 70 kilometres a week on average. It can be demanding; it’s not always sunny when all these k’s need to be run, plus there’s the repetitive nature of running, running and more running, but it’s what you need to do to make it at the top level.

“The vast majority of boundary umpires come from a running background and a lot of them still race, like pro running circuit and all of that sort of thing,” said Deckys.

“Some of the key things that they really look for is obviously experience is your number one thing, you know, having a good two to three years at least of state league football to make sure that you can handle all the situations that the game throws at you.”

What many perhaps might not know about umpiring, particularly at AFL level, is that each performance is scrutinised as closely as any AFL player inside the white line. Not only do they go through the vision and review games, but their positioning, throw ins and other technical aspects are monitored and scored out of 100.

Their score then gets compared with all the other umpires in the league and they’re ranked, from first to last. It’s a competitive side to umpiring that isn’t spoken about as often and if an umpire’s rankings aren’t consistently up to scratch, they soon find themselves moving on to something else. Which is a shame, but again, it’s quite similar to any other sport. Deckys has seen six generations of umpires come and go.

During the week, Aaron is the head of Health and Physical Education at Sienna Catholic College and just recently coached the school’s year eight AFL team to a big win over Merredin. Nobody was available to field umpire for the game, so the AFL Queensland Schools Gold Ambassador did it himself and it struck him just how much he enjoyed doing it. While teaching is definitely his job, the guy loves his hobby and it’s the promise of game time that keeps him motivated through the winter months, whether it’s umpiring year eight footy, or the big stage.

“I remember running around and thinking I wish everyday was like this, how good would this be,” said Deckys, about umpiring the high school game.

On the weekend, the crowd of support for Aaron will include his eight-year-old twin boys, Zane and Levi, as well as his six-year-old daughter Kyah and his wife Sarah. Flying in from Melbourne to share the moment, will be AFL field umpires Ben Ryan and Chris Kamolins. Also proudly watching on from home no doubt, will be umpiring mentor Roy Groom, who showed him the ropes, and Deckys’ biggest influence, former state umpiring coach Grant Kent.

After 300 games Deckys has ticked just about every box in his umpiring career, he’s on the AFL Queensland Umpires Association team of the century and he’s an AFL Umpires Association life member. There’s just one last mountain to climb, that last day of the footy season, the football holy grail, the grand final. At this stage it looks like the Queensland teams may find it difficult to reach the finals, so let’s hope the state is represented in some form on the big day, and Deckys can climb that final hill.