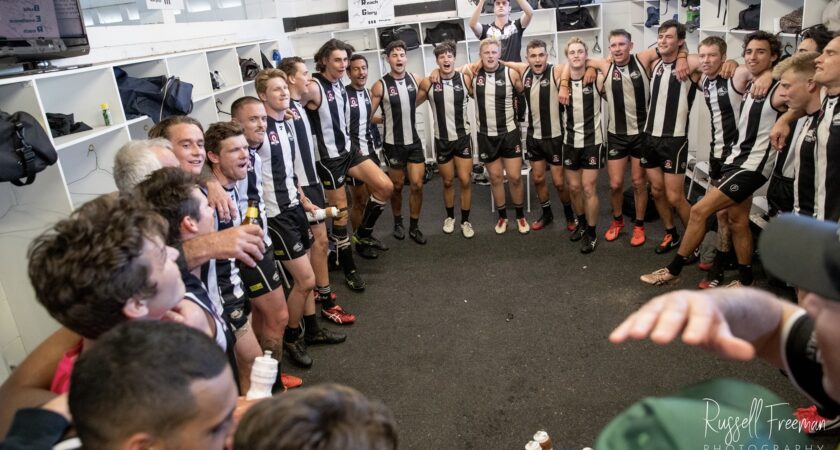 When you look back and reflect on Sherwood’s 2021 season, you cannot help but be blown away with how much it achieved with the young and developing list it had.

The Pies handed Labrador a 40-point loss; it beat Broadbeach by 26-points; after taking down Morningside by 19-points in one of the most amazing performances of the season; it handed the Panthers a 71-point loss in the second bout between the pair and the final game of the season.

The record of the top six beating each other was not as good as what Sherwood was able to produce; and the quality of its wins made them one of the must-see teams of the season; especially when the expectations externally weren’t as high.

There lies the problem however. The wins over Labrador, Broadbeach and Morningside were jaw-dropping and when it was good, Sherwood was really good. When Sherwood was bad, it delivered well below expectations with losses to Surfers Paradise (88-points), Broadbeach (102-points) and Redland-Victoria Point (63-points) making life tough.

Its loss to the Sharks by 63-points followed up with a 71-point win over the Panthers the following week for a 134-point swing against two sides that were arguably on par in the top six.

After a tough start to the season, the Pies won five of six games to make a charge for finals before losing two of its last three; missing the finals by one game and a massive chunk of percentage (ranking them 9th overall for percentage and points against for the season).

Sherwood was one of the must-see teams of the competition and there is no doubt that it will be working hard to bridge the gap between a quality day and an off day.

Josh Coombes and Will Fletcher were two of the outstanding players across the season with Will’s efforts recognised and rewarded to be one of the top up players for the Brisbane Lions in the AFL COVID-19 top-up squad.

The Pies will be coached again by former AFL superstar Adrian Fletcher who takes on this young and emerging list in his second season. Fletcher played 231 games across Geelong, St Kilda, Brisbane and Fremantle and was recognised as one of the most prolific handballers of his generation and using this skill to open the game up for team mates.

Looking across that resume, Fletcher has such a quality background in player development and Sherwood Football Club knows it has a gem in its hands.

Fletcher is well supported this year with some quality coaches by his side and around the club.
Brett McEvoy – Senior Assistant

”This off season we largely targeted players to step up to QAFL level footy who were playing Division 1 or Division 2 football that we felt would be ready to go at this level, wanting to catch players on the way up rather than on the way down.

Jack James has come over from Beenleigh where at just 20 already had five-seasons of Senior footy under his belt and looks ready to go.

Some other lads like Stirling Mitchell (Jindalee/Yeronga) and Belly Nizigama (Moorooka) should flourish at this level, and we also have some young guns in Owen Collins (Sandgate), Elijah Glass (Coorparoo) and Tom Carey (Suns Academy) who have come to the club.

We also have picked up Josh Preval (Aspley) who is a real athlete with blistering speed and at 200cm+ is a difficult match up, he has VFL and NEAFL experience and is still only a young fella,”- Fletcher

”We’ve lost a few on a couple of fronts. Jackson Allen moved over to Aspley, and there is no sugar coating it – losing a guy of that calibre who played his first ever Senior game at Sherwood and junior footy with us hurts a bit, blokes that kick it like he does are few and far between.

On a more positive note, we have also really pushed for our guys to get an opportunity at a higher level so our back-to-back Best & Fairest winner in Will Fletcher is playing VFL with the Brisbane Lions, as is another young talent Riley Greene.

These guys have been great for us, but we really pushed for these opportunities for them and they deserve it and we wish them well.

Bruce Reville and Jaspa Fletcher we think will spend most of their time playing VFL for Brisbane as well. While this is a loss of talent on the field for us, it also shows we are still churning out quality players and developing them well and pushing them to higher honours.

We also lost young John Baker who has talent to burn, but has sadly decided this level of footy doesn’t suit him.,” – Fletcher

YOUNG PLAYERS TO WATCH COMING UP THROUGH THE COLTS

Liam Hude had a solid year in the Colts in 2021 and impressed more so that he was able to establish himself at that level while still eligible to play under 16s. He is a strong performer on the track and continues to grow around the Senior playing group.

Lawson Campbell has spent three years in the Colts system and is a strong performer, very combative and competes well against the stronger and bigger bodies. He is able to do this on a more consistent basis which is a testament to his fitness and commitment to getting the best out of himself.

Will Cruice is another that will put pressure on the Senior team to win selection on a regular basis as a smooth mover and great user of the ball.

“Toara Marango would have to be an X-Factor, which is probably strange to say given he is a key defender, but he can take on any opponent in the competition and we’re confident he will come out on top.

Given the amount of quality key forwards running around the competition such as Hammelman, Moncrieff, Henderson, Freeman, Green and Anthony to name a few – it’s a pretty important role playing on these blokes week in week out, and we reckon he is the best out there for the job,” – Fletcher

”We have high expectations after the disappointing end to 2021. We had a young list last year and after a shaky start we were coming home strong, winning seven of our last nine including three consecutive wins over teams 1st, 2nd and 3rd on the ladder at the time and the draw was really opening up for us, so there is a sense of unfinished business there and with another year into our youngsters we are certainly ready to rattle some cages,” – Fletcher

“Labrador might feel like one got away from them last year and they appear to have recruited well, so they will be eager to go again. They were impressive in 2021 winning the minor premiership in all three grades and two Premierships.

The sleeper would have to be Noosa, after a winless 2021 they are a proud club and well resourced and have got plenty of their quality ex-juniors back to bolster their list and will be a tough road trip to Weyba Road in 2022,” – Fletcher

TEAM/S LOOKING FORWARD TO PLAY THE MOST AND WHY

“It has to be Mount Gravatt in Round 1 doesn’t it? It’s the traditional rivalry, and the Round 1 fixture is becoming a big event with the Pelly-Selvage Cup on the line and the Butler-Hammond Medal for best on ground a highly sought honour,” – Fletcher

”Young Darcy Prest is just a seriously good player and we expect him to lift another gear in 2022. He missed all of 2020 with a shoulder injury, then had an eye catching round one Senior debut last year, but injury had him a bit stop start and with hopefully a full year of footy in 2022, he will shows us all just how good he is,” – Fletcher

PLAYER TO WATCH FROM THE OPPOSITION

“Some clubs have been incredibly active in their recruiting with some big names floating around, but I reckon the return of some older heads down the road at Surfers Paradise has flown under the radar. I’ve always loved seeing Danny Green go about his work as a genuinely good QAFL footballer and look forward to seeing him slot plenty home, just preferably not against us,” – Fletcher

It is going to be an exciting season for the Pies in 2022 for more reasons than one. The performances on the field will be consistently better; but it will also gain greater satisfaction seeing a number of its 2021 stars spend more time in the VFL system and knock on the door to be perhaps be considered in the AFL system in eight-months time.

The potential in this list is definitely there and this team will continue to be one of the most intriguing acts to see in the QAFL with the quality of junior talent going to another level and players from lower divisions joining the team in the off-season and perhaps become household names at the end of the 2022 season.

At full-strength, Sherwood will be tough to beat; and when not at full strength, it will still be competitive while embracing the success of its young stars in the VFL.