3 Times all Australian for Wests 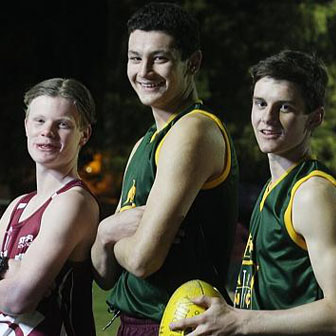 Story by Bernie Pramberg for the Courier Mail

A SMALL junior AFL club in Brisbane’s inner-west has achieved what is believed to be a record in the code.

Wests Juniors, based at picturesque Oakman Park at Toowong, had three boys named in an All Australian Under 15 team after the national championships.

Utility Jack Clayton, towering ruckman Connor Ballenden and midfielder Brenden Shelton, members of the club’s U16 Division 1 team, were honoured with green and gold jerseys. Clayton, a student at Brisbane Boys College, was also a member of the Australian under-15

Sheldon is one of half a dozen boys from the Darling Downs who travel twice a week to training and for games with Wests.

While the talented trio are the pinnacle of Wests’ success story, the club’s contribution to the game and community runs much deeper.

Wests Juniors could be a blueprint for sporting clubs everywhere.

Over decades they have created a culture of respect, quality coaching, good governance and family involvement.

With fewer than 200 members and only 100 players eligible for junior representative teams, the club’s reputation has spread throughout the code. Players from all parts of Brisbane and areas as far flung as the Darling Downs turn out for Wests.

A total of 22 young footballers from under-12 to under-16s gained representative honours this season.

“It has been a really exciting and enjoyable year for me and the club, having so many boys play rep football,’’ said Jack Clayton.

“In the under-16 group we probably have 10 players who play rep footy.

“Some bigger clubs have 500 kids playing footy and don’t have a Division 1 team.

“I started here as a six-year-old and have played here for nine years. It’s a great club and I like playing here.’’

Clayton, who will inevitably face the choice of making AFL or cricket his priority, admires the “silky skills” of Collingwood’s Scott Pendlebury and also Hawthorn’s Luke Hodge.

“Luke Hodge plays similar positions to me and I’m also a left-footer.’’

Teammate and fellow All Australian, Ballenden, is also a fine cricketer. At 190cm he is the perfect build for a ruckman and fast-bowler.

A Year 10 student at Gregory Terrace, he has already played lower grade cricket for the University club.

Coach of Wests under-16 team is Geoff Woolcock, who 30 years ago captained a Queensland Schoolboys line-up to a national championship.

He played his junior footy at Wests and returned as a coach for a time in the late 1980s while playing senior QAFL football for Western Districts.

“I’ve had this side since the Under 12s and love coaching,’’ said Woolcock.

“Like a lot of inner-city clubs Wests were on their last legs in the ‘90s but some pivotal people turned things around.’’

No matter who you talk with at Oakman Park, one name recurs as being synonymous with the club.

Keith “Happy” Wallis has coached almost 900 games in 35 years and is described as the “heartbeat’’ of Wests Juniors.

“Keith is a legend of the code around Brisbane. He never stops, I don’t think he ever goes home,’’ said Woolcock.

Club vice-president Rob Labrom, who has four boys aged between nine and 16 playing, said small sporting clubs in the suburbs should not be underestimated.

“We’re far from a super club or a powerhouse … our core business is developing young players,’’ he said.

“A lot of thought has gone into our decision making and a lot of time and money invested.

“Our geographical position at Toowong is a massive asset and we have a lot of kids from different areas. Club spirit and our financial situation have never been better.

“Word of mouth is a potent asset and we find that we are attracting players and their families.’’

Club registrar Trudy Braybrook moved to Brisbane from AFL heartland in Melbourne and discovered Wests Juniors when her son joined.

“We didn’t know anyone but just tried to become involved and loved it,’’ she said.

“The club was recommended to us because of its strong family culture. All the young boys really enjoy their footy and are very respectful. That’s just part of the culture here.”