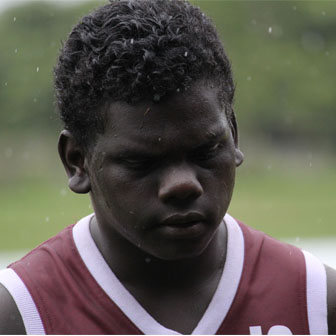 Three members of the Queenslander KickStart team have been named in the 2013 Flying Boomerangs squad which will compete at the NAB AFL Under 16 Championships in July and tour internationally in December.

Selected by the AFL’s Chris Johnson from the 2013 National KickStart Under-15 Championships held in Townsville, the squad of 25 young Indigenous men has been chosen based on football talent and leadership skills.

Jason Mifsud, AFL Head of Diversity, said the Flying Boomerangs program is a great opportunity for the best rising Indigenous talent in the nation to develop on and off the field.

“The Flying Boomerangs will be exposed to elite training and coaching, as well as personal development opportunities during the NAB AFL Under 16 Championships (July 6 – 13) and the international high performance camp.

“We are extremely excited by the appointment of Eugene Warrior as coach of the 2013 squad.

“Eugene is part of the AFL’s Indigenous Coaching Academy and his pathway to head coach of the Boomerangs is a strong example of the support and development opportunities that the Academy creates for rising Indigenous coaches.