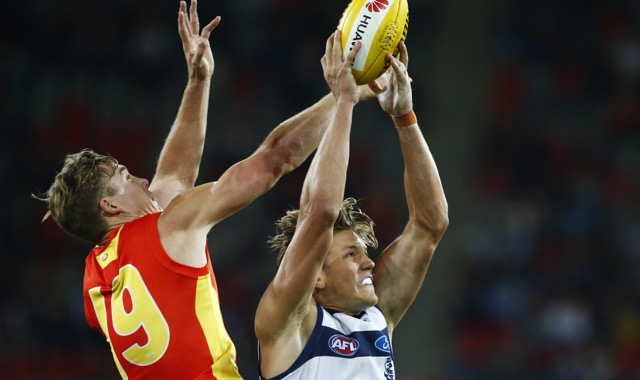 Dual Brownlow Medallist Gary Ablett will have an immediate opportunity to take the field against the Gold Coast Suns in his return to the Geelong Cats as part of the 2018 JLT Community Series.

The Australian Football League (AFL) today released the fixture for the 2018 JLT Community Series, which will see clubs scheduled to play two matches each as part of the pre-season.

Australia-wide Insurance Broker JLT (Jardine Lloyd Thompson) will again partner with the AFL for the pre-season competition next year, with a primary focus on regional and suburban venues as all 18 teams play two matches across a three-week stretch between Saturday February 24 and Sunday March 11, to lead into the 2018 Toyota AFL Premiership Season.

Ablett, the standout player of the last decade at AFL level with a Brownlow Medal for both the Cats and the Suns and eight separate All Australian selections, returns to Geelong after seven seasons with Gold Coast and the two clubs have been scheduled to meet at Townsville on Sunday March 4, in the first competitive hit out of 2018 for both teams.

Four matches and then five matches will be played across the first two weekends of the JLT Community Series – giving all clubs one bye – with all 18 clubs to then play across the final weekend of March 7-11.

AFL General Manager Clubs and Broadcasting Travis Auld said the schedule had been designed to enable the widest possible spread of fans to connect with the game, while a two-match lead-in provided a sufficient preparation for clubs before a challenging season.

“JLT is the National Insurance Broker for the AFL, our 18 clubs and the State Associations across the country, and they have a vital grassroots presence in our game to ensure that our players and volunteers are protected.

“Matches at regional and suburban venues align with the work that JLT does within the football community, and recent experience over the last decade has shown us that football fans have embraced pre-season matches played at venues that don’t normally host AFL matches, while our players are able to return to the communities where they had their starts as young players,” he said.

JLT Australia and New Zealand CEO Leo Demer said the company was looking forward to its second year supporting the men’s pre-season matches as they return to the community in early 2018,” Mr Demer said.

“JLT, as the official risk partner of the AFL, is committed to supporting grassroots football through to the elite level. We are proud to continue the tradition of bringing the game to the broader community. For more than a decade we’ve supported football communities wherever the game is played.

“Grassroots football is the lifeblood of the AFL and recent regional grounds, such as Coffs Harbour, Mt Gambier and Geraldton, have successfully hosted matches which have truly been embraced by the local community.

“The JLT Community Series brings fans and their communities closer together. It’s pleasing that new regional and suburban grounds will have the opportunity to host pre-season matches with Alberton Oval, Strathalby and Kingston Twin Ovals in Hobart becoming part of the JLT Community Series in 2018,” Mr Demer said.

To minimise travel for all clubs in the final week of JLT Community Series matches, eight Melbourne clubs will be fixtured to meet across four Victorian regional and metropolitan venues while Hawthorn will meet Carlton in Launceston, Alberton Oval will host a match between Port Adelaide and the Adelaide Crows, Fremantle will host West Coast at Joondalup, the Sydney Swans will meet the GWS Giants in a local derby at Blacktown and the Gold Coast Suns will meet the Brisbane Lions at Southport.

Mr Auld said the AFL was delighted that all 18 matches would again be exclusively broadcast on television live by Fox Footy and, in addition, every match will also be made available live to fans via the AFL Live App thanks to Telstra.

“Many of those communities cannot regularly access AFL football during our premiership season, due to distance or other constraints, and it is incredibly important that we take matches in the JLT Community Series to venues that don’t usually host games when we have the opportunity to do so,” Mr Auld said.

“I wish to thank Foxtel and Telstra for continuing to support our game with the decision to support all matches in the JLT Community Series with a live telecast.”