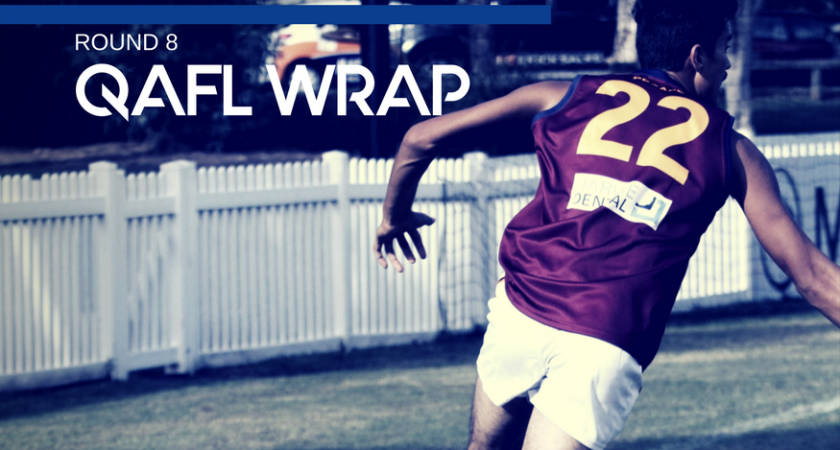 What a game! Very few gave Sandgate a chance at matching it with the on-fire Cats, but they did exactly that. Brendan Forbes, a Sandgate Hawk through and through, led from the front with four goals, two in the last quarter, including one he kicked out of the air from the ruck.

It looked bleak for Sandgate, late in the last, as Broadbeach steadied and held a 20-point lead, but they clawed their way back with three goals in quick succession.

Each side had the opportunity to put the other to the sword in the dying seconds, but inaccuracy played a huge role in the result.

Young Hawk Jordan Harding slotted one in the 28th minute to even the scores, but the Hawks just didn’t have enough left in the tank to crawl over the line.

Broadbeach were on the cusp of stealing the game, with a shot on the siren to Connor Nutting, but he couldn’t trouble the scorekeeper and the game ended, 80 points apiece.

Luke Hedger was influential for the Hawks in the last term, playing on at all cost and setting up some vital scoring opportunities.

Luke Shreeve continued his dominant run for Broadbeach, kicking three and showing his usual class around the ground. Skipper Nathan Quick was also solid down back and critical in the final stages for the Cats.

Morningside’s Kent Abey had a day out at Jack Esplen Oval, snagging four goals for the Panthers, while up the other end Dom Nash kicked three for the Vultures. The Panthers looked to have the answers at most stages in the contest, until a final quarter surge from Mt Gravatt got them to within a straight kick when the gong went.

It was the Mitchell Johnson show at Palm Beach’s Salk Oval, as the Lions midfield got right on top in their contest with the Western Magpies. On numerous occasions, Johnson plucked the ball from a contested situation and snapped it around the corner through the big sticks. His size and attack on the football made things difficult for the Magpies defenders.

Brendan Forbes and Tom Overington kicked four and three respectively for the Hawks, while Luke Shreeve bagged three for the Cats.

Bryce Retzlaff continued his assault on the league goal-kicking table, with a six goal haul for the Tigers against Wilston Grange. ‘Retzy’ now sits second overall on the table with 23 goals, a great effort considering he missed games early on with his hamstring injury. Brent Moloney kicked three up the other end.

Despite being on the wrong side of a big, 93-point margin to Palm Beach Currumbin Tom Ielasi played some great football for the Western Magpies. The tidy midfielder collected plenty of the footy and continually tried to generate ball movement for his side. On a scrappy, muddy day, he was clean with his disposal and rarely made an error.

Mark Desousa continued his run as Mr Consistent in Wilston Grange’s 53 point loss to the undefeated Labrador Tigers. The bulldozing midfielder rarely puts in a bad game and his experience is so important to the Gorillas midfield.

The Gorillas were able to hold on to the Tiger’s tail for a little while, trailing by only nine points at half time. Then the Tigers got things on their terms in the second half, kicking eight of the last nine goals of the game.

It was a big weekend for the Morningside Panthers, not only did they have their Pink Panther Day supporting breast cancer awareness, but they needed to get their season back on track.

Panthers fans would have been waiting for a good showing from their team and Steve Wildschut’s men didn’t disappoint, they came out with a bang and went into the half time break, up 73 to 29.

The Vultures rallied, getting themselves within striking distance, but the damage was done in the Panthers’ impressive first half.

Morningside weren’t the only team to make a statement on Saturday, Palm Beach came out and showed that they really mean business.

The likes of Josh Woolley, Jesse Derrick, Jason Burge, Mitchell Johnson and Tyler Cornish all had dominant performances against the Magpies, who struggled to contain the Lions’ outside run.

It’s the right stage of the season to be up and firing and as the finals draw slowly closer, the Lions loom as a scary prospect.