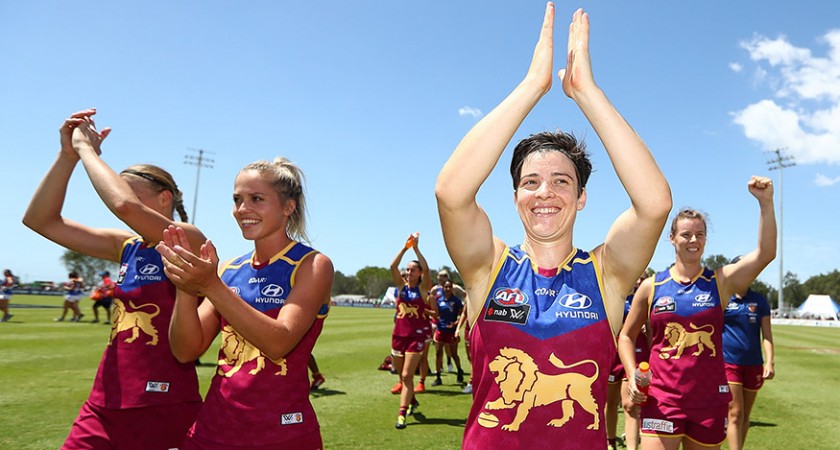 They’ve done it. A Lions team that wasn’t given much of a chance at the start of the inaugural AFLW season, has beaten the odds with an impressive unbeaten record from all 7 home and away games.

Just as impressive though and perhaps unnoticed in all the well-deserved hype and fanfare, is that 21 players from the squad of 27 came through Queensland community footy clubs.

From the first marquee player picked, in aerial specialist Talya Harris from the Zillmere Eagles, to pick 128 Jade Ransfield, the smart forward from the Yeronga South Brisbane Devils, it’s a celebration of Queensland talent.

Yeronga South coach Scott Stephens remembers another Devil, Emily Bates coming to the club with her father as a little girl to kick the footy around. Not many would have predicted the heights she would reach, but a particular light bulb moment stands out for Scott.

“When I first saw Emily play senior football, she was probably only 16 or maybe 17, but I knew then and there that she had something very special,” said Stephens.

As Bates’ coach for the past couple of years he’s had a front row seat to her development, from a ‘skinny little kid with a good left foot,’ to an AFLW player.

The transformation started in a talented Yeronga youth girls team and progressed to a strong Devils women’s outfit. Perhaps some of her finest work came when she captained the Queensland under 23 team against Western Australia, according to Scott, she played some exceptional games and grew in confidence as a leader.

“She’s been wonderful to watch grow and, you know, become a great athlete.

“I really think that, you know, what’s made her successful is . . . yeah, she’s got a lot of natural talent and everyone can see that, but it’s the work she’s put in,” said Stephens.

There are no claims of influence from Stephens, though he doubtless contributed a lot as a coach, there’s only praise for the girls, their work ethic, their talent and their ability to celebrate goals like nobody’s watching.

“Sam Virgo was co-captain with her (Emily) last year and they did a really good job, and the fact that, they’ve been able to go up to that elite level and continue their leadership roles with the Lions, it’s been really great for our club to be able to say that those girls are from Yeronga,” said Stephens.

Women’s footy has been growing over the past few years and the establishment of the AFLW has kept the trend moving ever upward at the community level.

“It’s really good to see females come in that have never played the game, that have watched the AFLW and thought I want to have a go at this,” said Stephens.

Bates isn’t the only one on Stephens’ radar, he’s also closely followed her Devils teammates, the speedy Kate McKarthy and the tenacious Sam Virgo, among others, with the same pride.

“I know that all three of those girls that have been regularly playing in the senior side will come back and enrich our club and hopefully pass a lot of what they’ve learnt on to the other girls at our club,” Stephens said.

Also featuring heavily on the list set to fight it out with the Crows for the Premiership, are recruits from the University of Queensland Red Lions, Wilston Grange Gorillas and the Coolangatta Tweed Bluebirds.

Each player has a similar story and a community club behind them, whose coaches, administrators, volunteers and club teammates will be donning the Brisbane Lions colors for one day in March, hoping their girls can get over the line.

Here’s a shout out to the community clubs who’ve shaped our Lions AFLW squad :