Women at the fore of Townsville footy 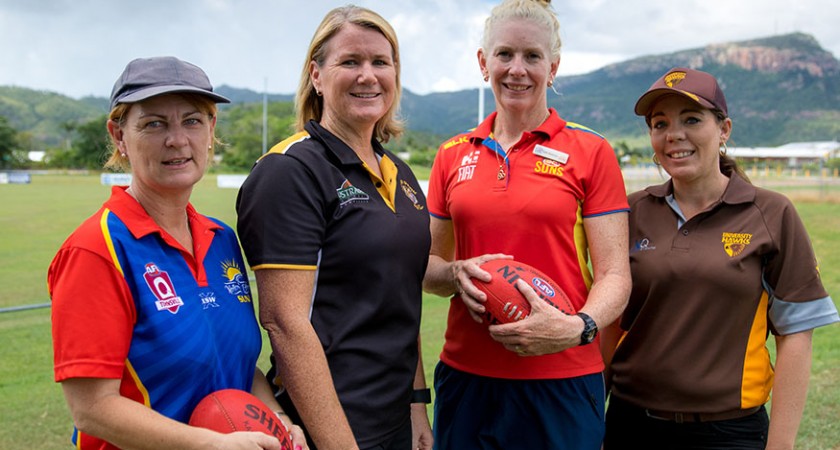 Not only is the women’s comp going from strength to strength, with female players signing up in droves – women are also holding the top positions with local AFL clubs.

Of Townsville’s eight Aussie Rules clubs (Suns, Hawks, Tigers, Bombers, Swans, Bulldogs, Magnetic Island and Charters Towers), four have female presidents or vice-presidents for the first time … and they’re bringing a whole new perspective not only to the game, but to how the clubs are run.

And overseeing it all is Kath Newman, who as regional manager for AFL Townsville for the past four years has been instrumental in not only developing the sport in North Queensland but fostering more female involvement.

The shift away from traditionally male-dominated footy is a refreshing one – and the blokes are behind it 100 per cent of the way.

Kylie Thomas, Nish McDougall, Jodie Sewer and Angie Akee have stepped into the top jobs for the Northern Beaches SUNS, the Uni Hawks, the Hermit Park Tigers and the Garbutt Bombers respectively – and all have a driving passion to develop the game and support young players.

And they truly are super women – all are mothers as well as holding down fulltime jobs.

Not only does the mother of two work fulltime as a business banker, she has spent the past seven years volunteering her time in a variety of club roles before being unanimously voted into the top job.

“I’ve done all the usual mum stuff when my two boys Byron and Ky were playing – helping out in the canteen, running water, being a team manager and being a part of  previous club committees.” she said.

“I put my hand up for the president’s job because there was the opportunity to shape the culture and development of our club in its new format.

“There have certainly been challenges – getting across all the different facets of running a club, and overseeing the opening of our new facilities and home ground at North Shore – but I have had tremendous support.

“We all agree a footy club is about more than just football – it’s a family, through the good times and the bad. You make the most amazing friends and can have a lot of fun.

“My dream is to foster the pathway for our junior players to continue their sport into the senior levels, and to build a strong club culture of support for both our players and our members.”
Nish McDougal – president of University Hawks AFL Club

Nish McDougal is also in her first year as president, for the University Hawks, and said she had no qualms stepping in as the first female president for the club.

After volunteering her time for the past eight years across a range of roles, the 34-year-old now not only runs the club but also plays in the women’s team the Hawkettes, is a keen supporter of husband Shane and son Harley who also play for the Hawks, chases around after two little Hawks aged two and four, and runs her own health and wellness business.

“Football is in my blood;” she said.

“I grew up in a rugby league family, and switched to Aussie Rules when meeting my hubby.

“After volunteering for so many years, I was keen to see certain things happen with the club – and if you want things run a certain way, then the only way for that to happen is to get involved, and put your hand up.

“I have received so much support, and we have a fantastic committee helping take the club forward.

“It is only our second year at our new home grounds at the Castle Hill PCYC, so I am keen to build that community involvement and club spirit.

“My focus this year also includes growing the juniors and our relationship with the Shalom College and the youth girls’ competition, and drive that back into the community.”

It’s all about family when it comes to the Hermit Park Tigers – Jodie Sewer is now in her third year as club vice-president, alongside her husband David as president.

The 41-year-old has been involved with the Tigers for 18 years, initially as a volunteer and then committee member, not only playing in the original AFL women’s
comp for the Tigers back in 2004, but back playing in the women’s side again last year and this year.

The Tigers life member has also given up her time as the club sports trainer, and has been the team manager of her 13-year-old son’s side when David was coaching the boys.

Oh, and in her spare time, she’s the deputy principal at Mundingburra State School.

“I think we work well as a couple leading our club with the support of the other committee members,” she said.

“We’re definitely on the same page with how to grow the club – and we see more of each other, both being involved, than if only one of us was doing it.

“The Tigers are very family- oriented – it’s all about the footy, about kids getting out there and having fun, and continuing that network of support into seniors.

“Some of our junior players have gone on to play in AFL at the national level, such as Josh Williams and Braydon Preuss.

“And with the women’s team, the men in our club have stepped forward to help us do our job, helping out as runners, coaches and team managers – it’s a real role reversal.”
Kath Newman – regional manager AFL Townsville

While Bombers president Angie Akee wasn’t available to do this interview, AFL Townsville regional manager Kath Newman says she and the other female presidents exemplify the direction the sport is taking at a local, state and national level.

Kath admits she is a North Melbourne fan tragic alongside husband Jamie, while her two teenage sons Joel and Max both play, with elder son Joel following in his mother’s AFL administrative footsteps as the development co-ordinator for AFL Queensland in Cairns.

As a former physical education teacher at William Ross High School, she was instrumental in introducing AFL into the school curriculum, firstly as the AFL coach with the Rhinos Sports Academy, followed by the strength and conditioning coach with the Gold Coast Suns Academy.

Wanting to develop her love for the sport further, she was engaged by AFL Queensland in 2013 to run the Townsville district – and she hasn’t looked back.

“It was definitely initiation by fire,” she laughed.

“In the first four months, I had to organise Townsville’s first NAB Challenge, Kickstart, Community Camp and the under-18 State camp … I had to hit the ground running.

“There were probably a few people who were sceptical I could handle the job, but I had tremendous local support as well as from AFL Queensland.

“It’s great to more women involved in AFL across all levels.

“It isn’t a case of the secretary always being a woman now, it isn’t always a male who is president – everyone gets in there to make footy work, and it is the best person for the job who gets the position.

“Women are bringing a different point of view and set of skills to the sport – looking at making changes where necessary with fresh eyes and a new approach.”

Kath said her focus for the next few years is to continue the work of AFL Townsville to raise the profile of the sport, and boost youth engagement, both boys and girls.

“We have introduced the women’s competition as well as AFL 9s, and are now focussing on developing the under-15 youth girls and boys competitions,” she said.

“We need to find ways to keep these kids engaged in sport, to fit around their lifestyle commitments such as the pressures of school work and starting new jobs – we need to talk to these kids and find out what they want, what we can do to keep them involved.”