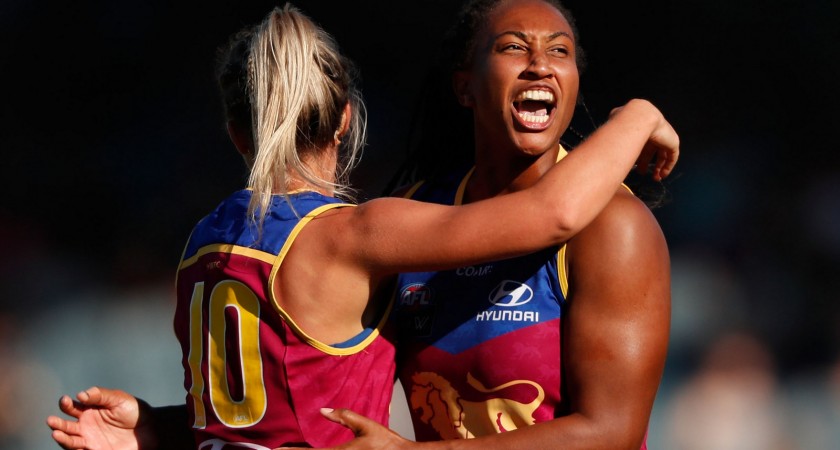 Metricon Stadium will host Saturday’s NAB AFL Women’s decider between the Brisbane Lions and Adelaide after the Gabba was deemed unsafe to play on.

The AFL confirmed the venue on Monday afternoon after hours of negotiations with the Gabba’s owners, Stadiums Queensland, failed to come to an agreement to make the Lions’ regular home ground available.

The game will begin at 1pm AEST, ahead of the QClash between Gold Coast and the Brisbane Lions at 7.05pm AEST.

The Lions are fuming at the Gabba’s ground staff – mainly head curator Kevin Mitchell – for re-sowing turf near the centre-wicket area following Adele concerts on March 4 and 5.

“Maybe the person that cuts the grass wasn’t too conscious of what might happen for AFL football,” Lions CEO Greg Swann said.

“We were dumbfounded at the time that someone would re-sow a wicket that isn’t needed until the middle of November (for cricket).

“Our question is why was that done, knowing there’s games coming? Why that’s been allowed to happen is beyond us.”

When asked if he was angry at Gabba staff, Swann said “probably more at one person than anybody else, to be honest”.

• Who kicked the Coates Hire Goal of the Year? Vote now

AFL CEO Gillon McLachlan said in a statement that the League was “profoundly disappointed” the Gabba could not be used for the game.

“The Brisbane Lions have earned the right to host the inaugural NAB AFLW Grand Final in their home state and it is extremely disappointing that the first-ever Women’s Grand Final cannot be at the home of AFL football in Brisbane,” he said.

McLachlan thanked the Suns for making their Metricon Stadium home available for the game and encouraged Lions fans to make the trip to the Gold Coast to continue supporting their undefeated women’s team.

Speaking later on Monday at a media conference, McLachlan praised the Queensland government for its support in offering to help the Brisbane Lions fans get to the game at Metricon, and said the AFL had been speaking about the Gabba as a possible venue “for weeks”.

“Of course I’m angry. It’s been three weeks. This season has been a remarkable story and journey, and Brisbane have finished on top and would like to be playing at the Gabba and it’s unavailable,” McLachlan said.

He said the AFL had looked into other options, including playing the game at Adelaide Oval, Ikon Park and the MCG. But the League consulted with the Lions, who chose Metricon ahead of playing at the MCG on Saturday.

McLachlan couldn’t hide his disappointment at the run of events.

“These venues are billion-dollar pieces of infrastructure there to be used, and that’s the incumbency on the people managing them to get them ready to play,” he said.

The round two match between the Lions and Essendon is now also in doubt, with another inspection of the Gabba due next week.

Swann said his club had been “absolutely let down” by the Gabba ground staff’s decision to sow new grass on the surface.

• Who took the Woolworths Mark of the Year? Vote now

The situation exemplified the need for Brisbane to have a boutique stadium to host women’s matches, Swann said.

“We’ve spoken to the (Queensland) government about not having to be in this situation again,” Swann said.

“We need a stadium that can cope with good crowds on a consistent basis.”

Cricket Australia CEO James Sutherland said it was “an unfortunate situation” and expressed his sympathy to the Brisbane Lions and the AFL.

“It’s never ideal to have to move a fixture, particularly given how successful the AFL Women’s competition has been,” he said.

“The centre area of the ground is incredibly important for both our sports – and together with the AFL, we will be looking to engage with Stadiums Queensland about future major events at the Gabba, to ensure the turf isn’t compromised in this way again.”