Selection claims for Chol and Spencer 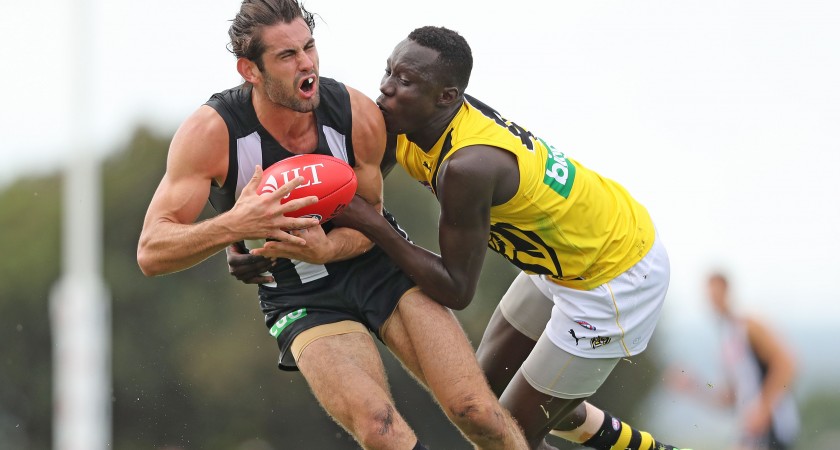 Big men Jake Spencer and Mabior Chol have lodged a strong late claim to Round 1 AFL selection with a good showing in Round 4 of the JLT Community Series over the weekend.

Barely on the selection radar a month ago, Spencer and Chol have given their respective coaches plenty to think about as each club wound up their preparation for the start of the premiership season in a fortnight.

Spencer, who hasn’t played at AFL level since Round 22 2015 after injury disrupted his 2016 season, has lodged a claim to join Max Gawn in a two-pronged Melbourne ruck combination after completing an excellent JLT Series.

Used primarily as a forward by coach Simon Goodwin in a 38-point loss to West Coast, Spencer responded perfectly with three goals to go with seven disposals, two marks and 11 hit-outs.

It would be a fantastic comeback and a fairytale addition to the remarkable career journey of the 28-year-old Townsville junior, who is looking more like the wild man from Borneo this season, with a big mop of hair and a giant beard.

Claimed by the Demons in the 2008 AFL Rookie Draft, the 203cm giant is in his 10th season at the club and has been a valuable back-up despite playing only 36 AFL games.

Chol is at the opposite end of his career but is pressing for what a month ago would have been a similarly unlikely Round 1 selection at Richmond.

The 20-year-old Sudanese product, who made his AFL debut in the final game of last season, was a real livewire up forward in the Tigers’ JLT clash with Collingwood in Moe.

The 198cm forward/ruckman had 12 possessions (nine contested) to go with two his hit-outs, two clearances and one goal, prompting suggestions that coach Damien Hardwick might prefer him to Ben Griffiths for the start of the premiership.

Chol, born in Sudan but raised in Egypt before moving to Australia in 2005, was taken by Richmond in the 2016 Rookie Draft after training with the Brisbane Lions Academy and playing with Aspley in the NEAFL in 2015.

A total of 25 Queenslanders played in the final week of the JLT series, which will be followed by an all-teams bye this weekend ahead of Round 1 of the premiership, which starts on 23 March.

St.Kilda ruckman Tom Hickey was the standout performer when he was best afield for St.Kilda in their three-point loss to Sydney in Lavington.

Returning from a week in the VFL that was part of a long-planned preparation, Hickey had 29 possessions (18 contested), 39 hit-outs, 10 clearances, seven tackles and 141 Champion Data ranking points.

Kurt Tippett, set to be used primarily as a big forward this year, was similarly impressive for the Swans with 16 possessions (10 contested), five marks, 14 hit-outs and a goal in the same game.

If nothing else the former Collingwood B&F winner and premiership team member reminded Lions fans just what a quality performer he is after injury denied the club his services for most of last season.

Seven Queenslanders played for the Lions in their last hit-out after Claye Beams and Archie Smjth were late exclusions from the original match squad.

Matthew Hammelmann, used primarily in defence at AFL level last season after being drafted as a forward, showed he can play either end when he added two goals to go with 14 possessions.

Josh Smith, returning from a two-week ankle lay-off at Collingwood, slipped straight back into top form with an equal team-high 29 possessions for the Pies against Richmond to lock up his spot in the side for Round 1.

Charlie Dixon had 13 possessions, four marks and five tackles for Port Adelaide in a 28-point win over Hawthorn, while Zac Smith had four possessions and 28 hit-outs before sitting out the final quarter of Geelong’s 22-point win over Essendon.

Alex Sexton continued his excellent preparation with 18 possessions (eight contested), three goal assists and a goal for Gold Coast in a 24-point loss to the Western Bulldogs. Jack Bowes had 11 possessions, Jesse Joyce 15 possessions and Rory Thompson nine possessions for the Suns.

Lee Spurr (19 possessions) and Lachie Weller (16 possessions) did well for Fremantle in a 21-point win over Carlton, and Brayden Preuss, pushing for selection in partnership with Todd Goldstein in a fashion similar to the Spencer/Gawn combination, had three disposals and eight hit-outs for North Melbourne against GWS.

At lower levels, Wylie Buzza was best afield as captain of the Geelong VFL side, Aliir Aliir made a successful comeback from injury in the Sydney Reserves, and Claye Beams and Liam Dawson were among the best for the Lions Reserves.

The fixture for Round 1 of the AFL season is:-