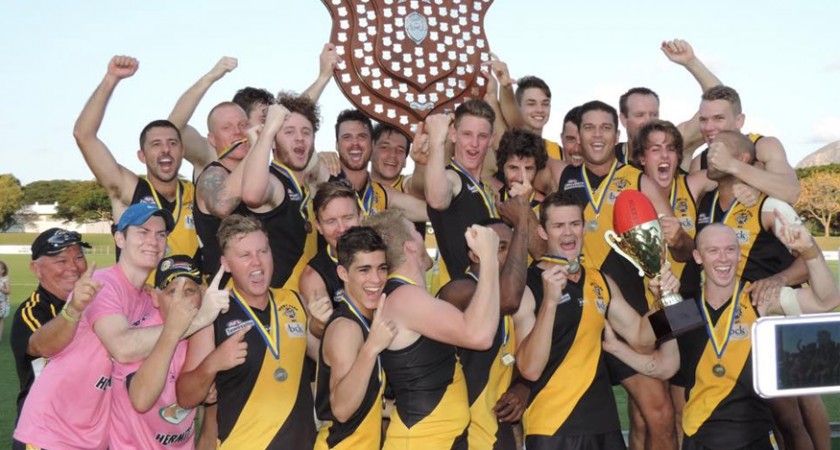 There is a club on the outskirts of Townsville by the name of the Hermit Park Tigers who continue to punch well above their weight division.

Why? Because when North Melbourne read out Josh Williams’ name at the NAB AFL Draft last Friday night, he became the fifth ex-Tiger to be on an AFL list.

Jarrod Harbrow, Josh Jenkins, Jake Spencer, Braydon Pruess and Josh Williams have all pulled on the yellow and black, and are all currently at AFL clubs.

Harbrow (Gold Coast SUNS) played in the Tigers under 14 premiership side in 2002, Spencer (Melbourne) played juniors and reserves and was the under 16 captain, Jenkins (Adelaide), played under 16’s and reserves, Pruess (North Melbourne) played juniors and made his senior debut in 2012 at the Tigers, and Williams (North Melbourne) went right through their juniors, becoming a senior premiership player in 2015.

It doesn’t stop there though. Brisbane Lions AFLW player Bree Koenen was a regular at Hermit Park senior training, when traveling to play in the Cairns women’s competition and there are plenty of current and former NEAFL and QAFL names, like Henry and Andrew Joyce, Chas Reinhardt,  Nick Clarke and Ryan and Stanis Agita, who all spent time at McMillan Park.

For Hermit Park Senior Coach, Jamie Fogg, this reaffirms all the time and effort the club puts in to developing their juniors.

“It’s tremendous. It shows to our juniors coming through that there is a pathway, whether it is in our club or in AFL Townsville, that if you put your best foot forward, you can definitely make it to the AFL level,” Fogg said.

He said exposing these kids, as well as plenty of other juniors at the club, to senior football makes a big difference.

“We have really had that focus for probably the last 10 years, in that we have to promote our juniors. When Barry was coaching he probably had five or six 16, 17, 18-year-olds playing senior footy, and that’s still the case today,” Fogg said.

“Some people might say that’s not a lot, but for a club where it is hard to bring those kids up because you are draining the junior pool, it’s been tremendous to be able to give them the opportunity to play senior football.”

So are they punching above their weight in his eyes?

“I guess when you look at the results, people probably say we are, but I couldn’t put my finger on one thing as to why. At the end of the day they have all put in the hard work. We have a motto, ‘hard work pays off,’ so that’s how they have achieved their results,” he said.

“But it definitely looks good for anyone coming to town, that our juniors have had some success, hopefully it brings a few more in the door.”

While five is an outstanding result, don’t think for a minute that the Hermit Park Football Club are done yet.

“I think we’ve got a couple who will be on the radar in the next few years. Dirk Koenen and Ryan Gilmore are two names that have come through our juniors who are ones to watch,” Fogg said.

Is this the new Queensland footy factory?

New Kidd on the block at Grange
2017 NEAFL Fixture