New Kidd on the block at Grange 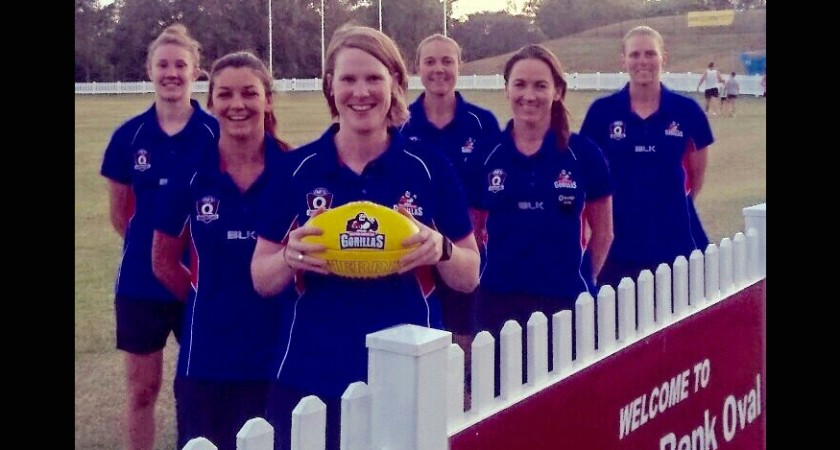 A big week for Wilston Grange has been capped off with the announcement of Laura Kidd as the new Head Female Coach.

Just yesterday it was revealed Nathan Clarke would be returning to the Gorillas as senior co-coach, and now Grange have also set the wheels in motion for their QWAFL side.

Kidd has been involved in female footy for many years, both as a player and a coach.

“I’m a teacher so coaching is a very familiar thing for me,” Kidd said.

“Coaching a sport that you love and is relatively new to Queensland, that’s a really exciting thing to be a part of.”

Currently the only female coach in the QWAFL, Kidd has set herself a big task for the next year trying to fill at least four female teams.

“It’s exciting to be a part of a club which has really embraced women’s footy,” Kidd said.

“That’s a pretty big goal within itself.”

The club aims to expand to have an Under 11, Under 15 and Under 17 team as well as senior and reserve footy.

And with the emergence of a clear women’s footy pathway now, Kidd has also put a focus on the development of the younger players at the club.

“We’ve got a number of coaches who are also players in our team but then coach the younger girls in their representative teams so it’s a nice transition there and another nice thing about our club,” she said.

“We’ve got a fair few Queensland representatives who have come over, especially in our junior programs so that’s exciting within itself to be able to foster their development throughout the year.

With many of the Grange coaches coming from a teaching background, Kidd says there is also a strong emphasis on player welfare at the club.

“We’ve already had the chat with the juniors that school comes first, so that’s definitely a different approach to footy than a lot of the other teams as well,” she added.

Kidd has already hit the ground running in her new role, conducting pre-season training and gym sessions with the club.

But the new coach is taking an unorthodox approach to her recruitment process.

“I’m trying to scout from a lot of different sports,” Kidd said.

“We’re really looking at getting girls across from rugby league, netball, touch footy and basketball backgrounds to transition their skills over to AFL.

“We had a girl come down to training who’s a touch rugby league and rugby 7’s player.

“We started talking to her and now she’ll be at training next week.”

While the support has been overwhelmingly positive so far, Kidd admits it will take some hard work to get the results for the club.

“I would love us to build a good base this year and then keep recruiting and playing solid football to hopefully get a fair few wins under our belt and aim for that premiership in a couple of years,” she said.

“We’ve got a really good team around us, really supportive, so in a couple of years there will be big things to come.”