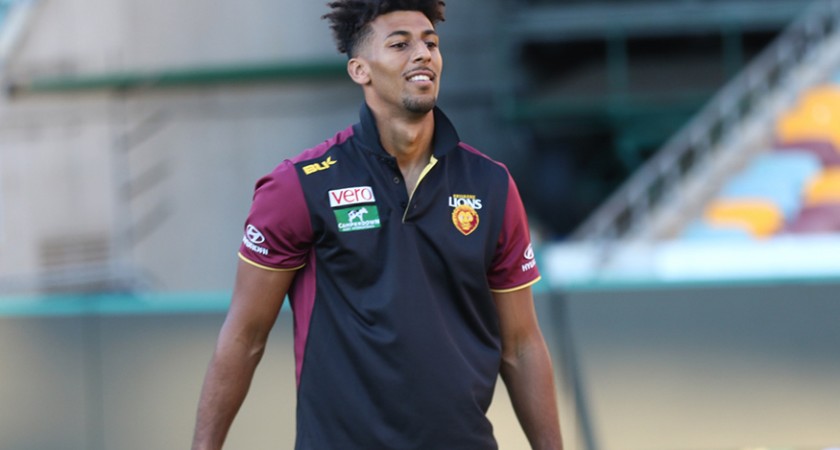 It’s been a huge week for Archie Smith. A 21st birthday, elevation to the Brisbane Lions senior list and now a pending AFL debut.

The basketball convert, in his third year as a Lions rookie, was last night named in a 25-man Lions squad for Sunday’s crunch game against Essendon at Etihad Stadium.

With first-choice ruckman Stefan Martin under an injury cloud, the Friday training session ahead of final selection will determine whether Smith debuts under the roof at Etihad.

But the good news for Smith is that, having been elevated to the senior list on the day of his 21st birthday on Tuesday, will almost certainly play at senior level before the season it out.

Rarely, if ever, is a rookie elevated without being given an opportunity. And after a three-year apprenticeship in which he has taken enormous strides it would be a fitting reward.

Smith had been targeted for a possible college basketball stint in the United States but after he was spotted by Lions scouts at a basketball tournament in 2012 was tempted to try football in 2013.

Although he initially went into it primarily to help build his fitness for basketball he quickly fell in love with the Australian game.

With an outstanding vertical leap and supreme athleticism, he did enough in his first season with the Queensland U18 side and the Lions Reserves to earn a rookie spot at the Gabba.

Ironically, if things had turned out a little differently he could have been wearing the red and black of Essendon on Sunday instead of the maroon, gold and blue of Brisbane.

The Bombers had a real liking for the teenage giant heading into the 2013 National Draft, and tossed up whether to take him or South Australian Orazio Fantasia, or one other player, with their last pick at No.55.

They opted for Fantasia, who has consolidated himself in the top side this year and this week won the NAB AFL Rising Star nomination. But Bombers insiders will tell you it was a close call.

Only Brisbane’s right to priority list Smith as a rookie saw them get him ahead of Essendon, who would have taken him in the Rookie Draft. Instead they opted for Gold Coaster Fraser Thurlow only to delist him after one season.

Smith, who made huge strides in the second half of the 2015 NEAFL season, has been a regular standout in the NEAFL this year, invariably saving his best for AFL opposition.

If he is included in the Lions side for Sunday he would be the 38th Queenslander to play in the AFL this season and the 10th debutant.

In other Queensland selection news ahead of Round 18:-

QFA Matches of the Round
QWAFL Round 12 Preview