From PNG to the QLD team 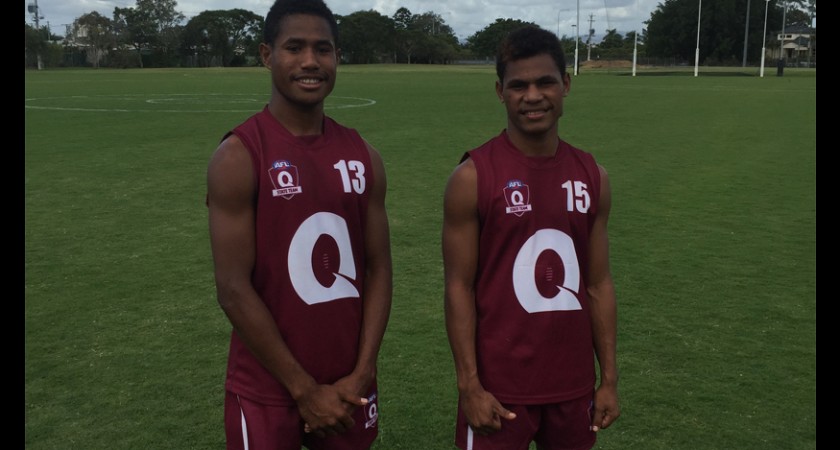 It’s not everyday an opportunity arises to play at the state level, especially as a teenager, but for this duo that hail from Papua New Guinea, it became a reality.

Not only are they playing at Broadbeach in the Colts and QAFL reserves, but they have played for the South Pacific Under 16 team and the Queensland Under 16 team in 2016.

From the capital Port Moresby, 16-year-old Hapex Bobogi has always donned the number three jersey for the Gordence Kokofas. A rising talent within Australian Football, officials have been keeping their eyes on him.

On the other side in Lae Morobe is where 16-year-old Kelly Kaugla grew up, before moving Port Moresby last year. Kaugla is an elusive half forward who plays for the Bomana Cats.

Despite playing for rival clubs during the season, Kaugla and Bobogi have done quite a lot in the past four years.

They both now volunteer with AFLPNG, helping run Niukick (similar to Auskick) in schools.

This season the pair has been busy representing Queensland in the NAB AFL Under 16 National Championships. They have also played in the South Pacific team at the Queensland Under 16 State Carnival.

Despite losing against NSW in the first game of the National Carnival, there on field performance raised eyebrows. In the second game against the Northern Territory, they backed up the hype with two great performances.

Due to them still being in the country for a few more weeks, AFL Queensland Development Coordinator Tim Searl decided to get the boys playing footy at Broady.

Both Bobogi and Kaugla played their first game on Saturday with the Broadbeach reserves against Wilston Grange. The result did not go in favour of the Cats, narrowly being defeated by 18-points, but the highlight of the match was Kaugla receiving the second best player on the day.

Being selected in the Broadbeach Reserves at such a young age is a huge achievement. To be able to compete in the top men’s state league is a credit to the Papua New Guinea pair.

With they QAFL having a competition bye this week, the boys will head to Graham Road to play for the Broadbeach Colts side, who take on Aspley.

With their trip ending on August 14, hopefully we get to see them in action a couple of more times.

Round 14 QAFL Rising Star: Jon Macanawai
QFA Matches of the Round