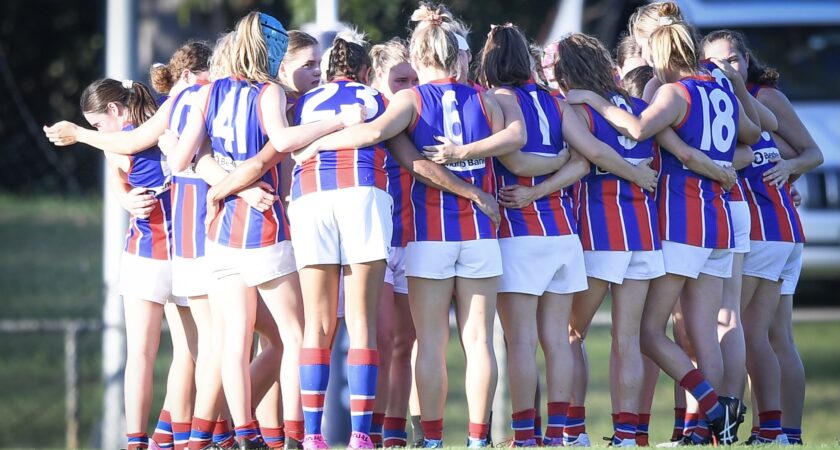 Wilston Grange enters the 2022 Bond University QAFLW with a new coach, a new captain, and a new generation of players ready to write the next chapter in female football at Hickey Park.

You could be forgiven for thinking a team that finished bottom of the ladder and then lost its captain, its Best and Fairest winner, the QAFLW Rising Star, its two first-choice rucks, its two leading goalkickers, and other players with a collective 125 games experience, might be feeling pessimistic about its chances in 2022.

On the contrary, Mark Wilkin, who takes over from Barry Standfield after acting as Assistant in 2021, sees an opportunity to build the foundations of a Gorillas team that can be highly competitive this year and then challenge for silverware in years to come.

“What I want to set up is the players being really clear on what their role is and that they really understand that there are four quarters of footy. If we play all four quarters, irrespective of the outcome, I’ll be proud as punch of them.

“The realist in me says we’ve got bigger things (than finals) to have to look at this year, but if finals is an outcome of that, that’s a big tick.”

The Gorillas’ last-placed finish in 2021 may be seen an as indicator of the rising standard of the Bond University QAFLW. Only one last-placed team in recorded history (Maroochydore in 2018) has finished with a higher percentage, and they finished one point off the record for most points by a last-placed team.

At the other end of the park, however, they conceded over nine goals per match, which gives Wilkin a clear priority for the new season.

“We want to be defensively focussed. That was one of the weaknesses last year, so it’s about how we tighten that up.

Wilkin is also confident that the players still at Hickey Park can form a strong defensive unit despite the departures from the club.

“We’ve still got Lauren Shackleton, she’s a really solid fullback. Ruby Ker gives us options to play in midfield or the backline. Chloe Litherland is back; before she left in 2020, she was such a strong contested marker at centre halfback. So I’m not sitting here thinking we’re devoid of defenders.

The other big plus for the Gorillas is the addition of three players from last year’s Coolangatta Tweed side: midfielders Uma Brennan and Keyshia Matenga; and prolific goalscorer Kitara Whap-Farrar.

Wilkin has been delighted with their contributions to the culture of the team.

“They’ve been a great addition. ‘Keys’ has really embraced coming here. She’s not an extravert but, if she needs to say something, she will. Uma’s the same. We’ve just had our team camp and to hear her speak about how she loves being part of this team was great. And Kitara, the girls have got around her and she’s enjoyed that as well.”

The Gorillas have also gained Dutch-born Rachele Hennekam who last played for Hastings on the Mornington Peninsula and Collegians in Melbourne before taking a break from the game. Similarly, former Sandgate junior Georgia Smith returns to Australian football this year from soccer.

THREE PLAYERS YOU SHOULD WATCH

Findlay takes over the Wilston Grange captaincy this year at age 20, and yet few would believe she’s not ready for the responsibility. A Lions Academy graduate, Findlay doesn’t always have high possession numbers but she is forever making the ‘hard ball gets’, attacking the contest and providing space for her teammates, all while looking completely in control.

Wilkin says: ‘Macka’ played incredibly well off the halfback line last year but is a really good option in the midfield as well.

A 17 year-old Lions Academy player, Carter began last season as a strong tackling halfback who would occasionally drift out of games. By season’s end, she was a bullocking on-baller who was rarely out of the contest and even had the confidence to ‘ragdoll’ two-time Best and Fairest winner Jordan Zanchetta over the boundary line.

Wilkin says: Daisy is one of those players where if we can get her around the ball, she’ll use it well.

Whap-Farrar began her 2021 season with a horrific concussion that sidelined her for a month. On her return, she kicked seven goals in her first six quarters of football. The first of these saw her collect the ball inside the 50, twice dummy and change direction past UQ fullback Jessi Henning, and then drill home the goal on a slight angle. That was named the Bond University QAFLW Goal of the Year.

Wilkin says: Kitara’s football skills, even at a young age, are what you’d call ‘silky’.

WHY YOU SHOULD GO SEE WILSTON GRANGE PLAY

Wilston Grange gave Bond University QAFLW debuts to 17 players in 2021, 12 of whom were teenagers. The Gorillas have an enviable junior program and show no fear in giving their top young talent an opportunity. Indeed, Wilkin has had the Under 17s and 15s training with the seniors during the pre-season and believes some of them will be ready for the top grade in 2022. The growth of this side will be rapid. This is not a movie where you want to miss the start.