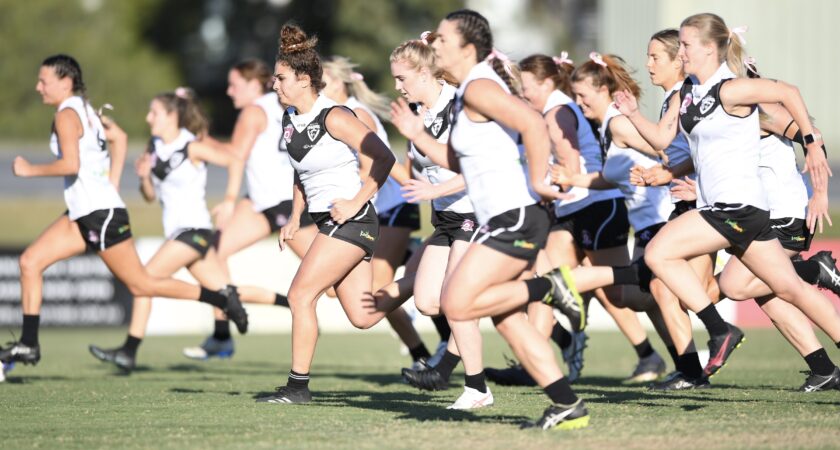 Southport enters the Bond University QAFLW in 2022 with a near-perfect track record, an enhanced playing squad, and a desire to make an immediate impression.

After making a very late entry into women’s Australian football, the Sharks were Premiers in both of their QFAW seasons with their only two losses (in 23 matches) coming in their first match of each season.

Coach Ryan Davis has prepared the team for the transition from QFAW to Bond University QAFLW by eliminating any need to transition.

“When we started the program a couple of years ago, we always had the mindset that we would be playing in the QAFLW, so our standards and expectations have been that of the state level from the beginning.

“We haven’t had to change a great deal of training in terms of the type of drills, our game plan, our GPS data, our recoveries; everything is geared towards playing at the highest level in Queensland.”

While Southport’s addition to the Bond University QAFLW was originally intended to create a 9-team competition, Coolangatta Tweed’s decision to re-establish its women’s program in the QFAW in 2022 has seen no fewer than nine former Bluebirds elect to stay in the state league by making the trip up the Pacific Motorway.

The Sharks have also provided a home for midfielder Poppy Boltz and defender Mya Cozzuol, both of whom were named in last year’s Cazalys AFL Cairns Women’s Team of the Year with Boltz also winning the Jo Butland Medal (Best and Fairest award).

All of this recruitment raises the question of not only whether the new squad can combine effectively, but whether the players who won Premierships for Southport feel that their club has been taken over. These are concerns that Davis is happy to dismiss.

“We did a lot of team-building early and our pre-season camp was solely focussed on getting to know each other and trying to break down any barriers there might be. The group’s gelling together quite well which shows at training and hopefully through the season.”

Strong evidence for the team’s unity came in the form of mammoth victories in trials against Aspley and Bond University.

The final question mark around the Sharks’ chances in 2022 may have been around Davis himself who, in a career that has included 35 AFL matches with the West Coast Eagles and Gold Coast SUNS, will continue to play with Southport’s VFL side. Again, the club has solved any perceived problem before it became a real one.

“Coaching is certainly the priority. Jarrod Field (General Manager Football Operations) has worked out all of the clashes and the female program is my number one priority. Being at my age now, it might be handy to miss playing a game or two here and there.”

THREE PLAYERS YOU SHOULD WATCH

Southport is not a side that relies on a single target to score goals, but Davies ends up scoring a large number of them anyway, 32 in two seasons to be exact. Davies’ speed means she plays more like a small forward than a target forward, but her strength and positional awareness gives her the ability to play taller when needed.

Davis says: “Hannah’s ability to take her game to the next level in terms of her running capacity and being able to get to more contests means I think she’s going to go really well this year”.

Yes, Pearce is tall (186cm) which is often all anyone seems to say about her, but the keys to Pearce’s success in the ruck are the distance between her feet and the ground, and the lack of distance between where she taps the ball and her midfielders. Pearce is an all-round athlete with both physical strength in the air and the aerobic capacity to play as an extra on-baller.

Davis says: “Lilly’s ability to get our midfield and our game plan going is imperative for how we like to play the game”.

Boltz won the 2021 Jo Butland Medal for the Best and Fairest player in AFL Cairns’ Womens with 31 votes. Second place received 19 votes. She won the coaches’ MVP award by 12 votes as well. Boltz can break tackles seemingly at will to create space for herself and take one or more defenders out of the contest. From there, her passing, handballing and vision all appear to be nearing elite level.

Davis says: “Poppy’s power in the contest is something I’m really looking forward to”.

WHY YOU SHOULD GO SEE SOUTHPORT PLAY

Southport’s support play can be breathtaking. The positional sense of the whole team but especially their inside midfielders mean that every tackled player can trust that an option to promote the ball is never far away. Maddy Watt won the QFAW Best and Fairest last year by constantly supporting the ball carriers; now she has the likes of Georgia Breward and Jess Malouf with her to increase the threat. If opponents can’t disrupt Southport’s support play, they may not be able to disrupt their charge to the finals either.