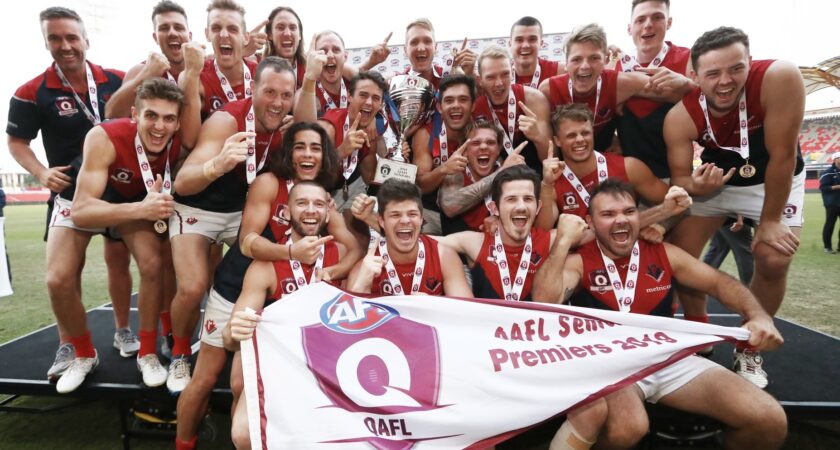 2019 QAFL Premiers, Surfers Paradise launched into the 2021 QAFL Senior home and away season with expectations that it could get close to capturing its Premiership success of two-years ago.

After failing to make the finals in a severely COVID-interrupted season in its Premiership title defence; the Demons had a challenging start to its 2021 campaign. Losses to the Sharks, Labrador and Cats in the opening month was boosted when it rebounded back to some solid form with an impressive 70-point win over Noosa to give themselves some confidence.

Surfers Paradise executed its best game of the 2021 season when it took down the in-form Redland-Victoria Point by 14-points on the road to avenge its opening loss of the season and boost that confidence of taking down a contender.

After some mixed results in the middle of the season; the final quarter of its Round 13 match with Wilston Grange changed everything around for the Demons. With the Gorillas putting up a fight across the first three quarters; the Demons played their best brand of football for the season in the final term with 8.2 to 1.2 and record a 71-point win at Hickey Park.

If you’re only as good as your last quarter, Surfers Paradise capitalised on that last quarter against the Gorillas with a hat-trick of wins before the home and away season came to an end; two of those coming against contenders Labrador (one-point) and Maroochydore (17-points) and build that confidence internally and respectability externally.

The Demons earned themselves a home final against Morningside on the season’s resumption. After trailing for about four-to-five-goals for much of the game; the Dees left their run too late as they fell short to the Panthers by one straight kick; leaving the club absolutely devastated.

COVID put the brakes on the Demons quest for greater momentum with winnable matches against Noosa, Sherwood and PBC to close out the home and away season but with the talent in the squad; there were missed opportunities that the club will no doubt be eager to rectify ahead of the season opener against Palm Beach Currumbin.

Surfers Paradise will again be led by Brad Moore who will enjoy his sixth season at the helm and already has a premiership medal in his trophy cabinet. Moore has previous coaching experience at Labrador, Southport and Gold Coast Suns.

YOUNG PLAYERS TO WATCH COMING UP THROUGH THE COLTS

“Tough season ahead with new teams, injection of players from strong leagues and a longer season,” – Moore

TEAM/S LOOKING FORWARD TO PLAYING MOST AND WHY

The Demons will look forward to every Gold Coast derby game that generates a great rivalry.

Dan Green had ‘retired’ following the 2019 premiership win and has returned looking fit and eager to take on the competition.

PLAYER TO WATCH FROM THE OPPOSITION

There is a lot to like about where the club is heading in 2021. Like every year, each team has specific expectations of how it can improve from the previous season and with some very handy additions to cover some of its losses; and the experience of premiership hero Dan Green injected into the mix; there is no reason why this team cannot contest again for the premiership and enjoy a far better season in 2022.

The key to the success for the Demons in its matches against the premier sides of the competition is to establish dominance early and being the hunted for much of the game. It has some good fire power up forward and on his day, Brody Haberfield can be one of the most damaging forwards in the competition. He is impressive for his size and works well at ground level while Sam Hilton Joyce is a class-act in the air and up forward.

With Alby Jones containing the backline and Matt Green dominant in the ruck, the Demons have most areas  covered to be a premiership contender.

Submitted by Peter Blucher. The Gold Coast SUNS have showcased the heart-warming reach of AFL football as they contemplate a nine-week stretch which will be... [more]